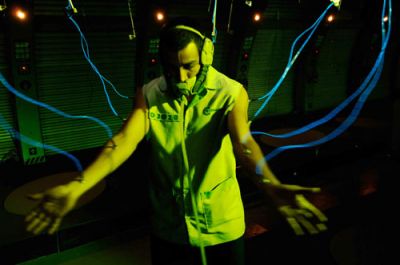 When the Cruz family’s farm in Santa Ana del Rio, Oaxaca, is destroyed and the head of the family killed, young Memo Cruz (Luis Fernando Peña) leaves for Tijuana, the “city of the future.” He hopes to get work in one of the Tijuana factories in which Mexican workers operate equipment hundreds of miles away, via remote controls plugged directly into “nodes” — jacks that connect to the workers’ nervous systems.

It’s the near future, the U.S.-Mexico border is closed, and the United States has “what it’s always wanted: work without workers.” Technology has made telecommuting to the assembly line as feasible as telecommuting to the “Help” desk. Goods are produced and buildings erected in U.S. factories and construction sites by robots controlled by Mexicans working 12-hour shifts in the sweatshops, which are called “sleep dealers” for the frequency in which workers fall asleep at the controls in a tangle of wires that can send current coursing through their bodies.

That’s the barely science-fiction premise of first-time writer-director Alex Rivera’s richly imagined new film. Sleep Dealer is the story of what happens to Memo in Tijuana, and of Luz Martinez (Leonor Varela), the writer he meets there, and Rudy Ramirez (Jacob Vargas), the Mexican-American soldier whose life has touched theirs in ways they can’t imagine.

In this future, the U.S. armed forces fight via the same remote controls the “sleep dealer” workers use, policing the world on behalf of U.S.-owned enterprises and protecting them from “terrorists.” Rudy was the remote-control pilot of the drone plane that killed Memo’s father.

Rudy discovers the consequences of his bombing mission when he sees Memo’s story, posted by Luz on the reality website she writes for. Writers, too, have nodes in Sleep Dealer; Luz sells her memories along with her words. Memo’s account is all the more affecting because Luz’s “readers” can see Memo’s stricken face as he describes the events surrounding his father’s death. Stricken with guilt, Rudy takes a leave from the Air Force and comes to Tijuana to search for Memo.

Sleep Dealer puts human faces onto two facets of globalization — the new opportunities it offers global capital for exploitation, and the new chances global communications offer the rest of us to join together and resist that exploitation. But the movie is years behind in its gender politics There are few women in Rivera’s Mexico, and except for Luz, the few that do appear are nearly mute. At moments during the movie, I thought wistfully of another film about Mexican workers and U.S. industry: Salt of the Earth, the 1954 account by Hollywood-Ten director Herbert Biberman of a New Mexico mining strike. In Salt of the Earth, events force the women of the community into unaccustomed — and transformative — leadership. Sleep Dealer could have used some of that film’s attitude.

That said, Sleep Dealer is a rarity, a movie that engages head-on the life of workers under capitalism. Doing it in the context of globalization was an obvious choice; throwing in Mexican-American relations and the United States as a world police force might have been over-ambitious, but it works. A little polemical, more than a little sexist, it’s nevertheless often touching and definitely worth seeing for its take on the potential futures of globalization.