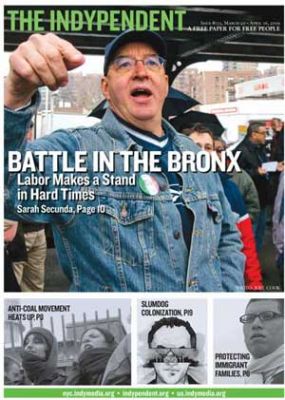 I find it problematic that you are including Robert Jensen as a commentator in your newspaper. Jensen is a proponent of what is called “rescue feminism” or “radical feminism,” meaning that he does not support sex workers’ rights or harm reduction in the sex industry. At one time, The Indypendent contained an actual sex worker column. Whatever happened to that? In the future, The Indypendent should feature the voices and concerns of sex workers instead of the pseudo-psychology of so-called “radical feminists” like Jensen.
—Susan from Staten Island

BRING LABOR MOVEMENT BACK
Response to “Battle in the Bronx,” March 20:

Real wages for working people in this country have been stagnant since the 1970s. Why? Because labor was defeated and the labor movement that remained climbed into bed with management. We are facing some hard times, some brutal austerity and these brave workers are taking it on the chin for all of us. We all need to come together and support them, whatever our differences over strategy. They have showed remarkable unity and solidarity in this effort; can we not do the same? Their fight is our fight.
—Beth

While the New York City Department of Buildings (DOB) has updated their website to deliver more information more efficiently, it currently does not have drawings (plans) available online and is not planning to do so in the near future. Many times illegal construction doesn’t become evident from the application and schematic and viewing of full plans is crucial. Plans can be viewed at DOB. Aside from being a time-consuming task (two to four hours), many times plans are not available for one reason or another weeks at a time. The 30-day deadline will make it a lot easier to hide illegal construction and to legalize it after the public comment period has expired.
—Local Resident