HARARE, Zimbabwe—“Quick, snap the picture, now,” urges Paul Magwenya*, a local journalist, as we lean out the window of our car to take a shot. We are at a morgue in the capital city of Harare, which has been in the news since last fall due to a cholera outbreak and an employee protest. The Zimbabwean police force has made it clear the hospital grounds are strictly a no-go zone, especially for reporters. Worried, we speed out of the parking lot, passing a police car as we go.

As we catch a glimpse of the officer, our driver chuckles and exclaims, “I’ve got a journalist in the front seat and two Americans taking pictures in the back. I’m really asking for it.”

We nervously laugh at our introduction to the clandestine world of Zimbabwean journalism, but Magwenya does not find the comment amusing. As a journalist trying to work under President Robert Mugabe’s repressive government, he lives in constant anxiety. For years Mugabe has systematically shut down newspapers opposed to his policies and had cheeky journalists beaten and tossed in prison. Last year several were arrested, detained or beaten, and one photographer was found murdered after he published pictures of injured opposition party leader Morgan Tsvangirai.

Lately, as cholera rages, famine spreads and inflation skyrockets, law enforcement services have been even more brutal. In December, former reporter and peace activist Jestina Mukoko and journalist Shadreck Manyere were abducted from their homes and held for weeks before receiving a hearing. Organizations like the Committee to Protect Journalists are using the recent power-sharing deal with the opposition Movement for Democratic Change (MDC) to call for increased media freedoms in Zimbabwe, and especially for the release of detainees in situations like Mukoko’s or Manyere’s. But it is unclear when — or if — Zimbabwe’s repressive climate will change. 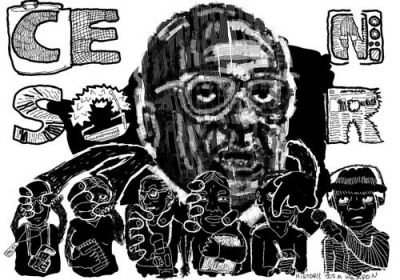 It didn’t always used to be this way. Magwenya used to work for the Daily News, an independent newspaper in Harare banned in 2003 when it refused to tell Central Intelligence Officers (CIO) where it got its funding. John Dube*, a former Daily News correspondent now working for the independent news agency ZimOnline, recalls the police breaking into the Daily News headquarters. “They were heavily armed. Someone is pointing a gun at you and asking you questions.”

Since then, Daily News reporters have either had to leave the country to find jobs or turn to freelance stringing for foreign media or online outlets — unless they want to work for a local paper dedicated to the state. “The local media has no objectivity. You have to toe the party line or you’ll get banned. It’s happened so many times,” Magwenya said.

Magwenya himself secretly works as a stringer for CNN and has approximately 20 colleagues in Harare who do the same work for other major Western media outlets. Not only is he free to express himself in his dispatches however he likes, but he also gets paid by wire transfer in U.S. dollars, vital to purchasing groceries and other goods as the Zimbabwean dollar has become worthless.

But reporting for foreign news services is far from the ideal job. For a journalist in the land of chaos, the fear of being arrested is all too real, and the possibility of an arbitrary jail sentence — or even torture — is terrifying. Though most are accredited and are doing nothing illegal, independent journalists have been known to wind up injured, missing or dead.

Later that week, Magwenya takes us to a legal hearing that Mukoko and Manyere finally obtain after weeks of illegal detention and torture. Manyere is a fellow journalist and friend, and Magwenya is concerned about him.

Almost immediately upon entering the building, Magwenya ignores us and goes to sit with the other journalists. Because we are foreign, he does not want to be seen with us. We are not accredited, and Western journalists have been arrested and deported (like Barry Bearak of the New York Times). At the very least, journalists are often followed by police. Magwenya’s instinct is proven correct. Throughout the eight-hour day at the courthouse, various informers sneak around behind us, and intelligence officers with guns eye us up and down.

Mukoko and Manyere are represented by several lawyers from Zimbabwe Lawyers for Human Rights (ZLHR), a foreign-funded association of attorneys contracted to handle human rights cases in Zimbabwe. They have handled most, if not all, of cases involving media workers in the past few years — around 15 in total — and are proud to say that no one has been convicted in court, although plenty have been detained illegally. The lawyers argue these cases at a heavily discounted rate for journalists, and either the journalist’s employers or the local chapter of the Media Institute of Southern Africa usually pays the remainder of the bill.

The star of the legal team is Beatrice Mtetwa, a spirited fighter from Harare, unafraid to speak her mind. At one point, she openly denounced Mugabe’s government as a “rogue state” in a courtroom full of intelligence officers, which was met with stifled laughter from the reporters’ corner. “I get in trouble from time to time,” Mtetwa admits. Last year she was even beaten with truncheons by the police.

A recent power-sharing deal between Mugabe’s ZANU-PF party and main opposition leader Morgan Tsvangirai’s MDC could create an impetus for change. But when asked if the deal will bring new media freedoms to Zimbabwe, Mtetwa says it is too early to tell, but she hopes that the MDC will take media repression issues seriously and push for a more independent judiciary that can act to protect journalists.

Magwenya and Dube are less optimistic. Dube indicates that he is uncomfortable with the new agreement and unsure what the MDC will do with its newfound power. “It’s not like since the agreement happened now independent newspapers are ready to start publishing again,” he insists. “It will take a very long time.”

Time seems to be a variable no one in Zimbabwe can calculate. Magwenya says that detainees can be incarcerated for anywhere from a few days to nine weeks to longer. In reference to the photographer murdered last year, he adds, “The regime is capable of doing anything.”

Magwenya constantly keeps that thought in mind. There is no part of his day that does not involve some sort of covert movement designed to keep the police and the CIO at bay. When he leaves his house in the morning, he takes one road through town, but makes sure to take a different road home. If he is reporting from a certain location — anywhere from an aid site to a prison to a slum — he will not go there more than once per week. Any interviews he conducts are behind closed doors, and any names he uses are routinely fake. Dube tells a similar story, adding that sometimes the CIO will tail journalists in their cars and try to cause a collision.

Worried about their security situation, some reporters have created an informal union of freelance journalists in Harare. Dube says the union has a system in place where its 35 members check on each other’s locations daily to ensure that everybody is always safe. “Sometimes if someone is doing an exclusive story,” Dube says, “he can borrow a car from one of the others to throw off the police. We also will sometimes travel together as two or three, so that someone can always be on the lookout for people following.”

As we leave the courthouse in Magwenya’s car, we notice that a CIO officer who had been staring at us outside is in the car behind us. For a minute, all of our hearts beat a little faster until he turns at the next light. Sighing in relief, Magwenya heads toward his apartment so he can file a dispatch on the day.

Magwenya tells us about a time he narrowly escaped detention at an opposition event by bribing his guard with beer money and then sneaking away. “Everyone drinks beer here,” he explains as he pops open one of his own. “Life is stressful in Zimbabwe.” Still shaken from the courthouse incident, it’s easy for us to see why.

*Names have been changed for security purposes.