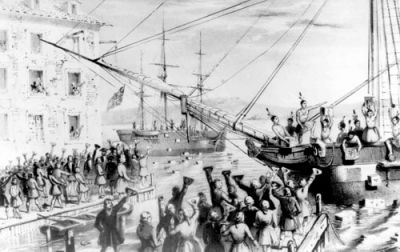 Editor’s Note: With all the talk about tea parties and tax revolts, The Indypendent felt it was time for a historical perspective.

The real Boston Tea Party was a protest against huge corporate tax cuts for the British East India Company, the largest transnational corporation then in existence. This corporate tax cut threatened to decimate small Colonial businesses by helping the British East India Company pull a Wal-Mart against small entrepreneurial tea shops, and individuals began a revolt that kicked-off a series of events that ended in the creation of The United States of America.

On a cold November day in 1773, activists gathered in a coastal town. The corporation had gone too far and the two thousand people who’d jammed into the meeting hall were torn as to what to do about it. Unemployment was exploding and the economic crisis was deepening; corporate crime, governmental corruption spawned by corporate cash and an ethos of greed were blamed. “Why do we wait?” demanded one at the meeting, a fisherman named George Hewes. “The more we delay, the more strength is acquired” by the company and its puppets in the government. “Now is the time to prove our courage,” he said. Soon, the moment came when the crowd decided for direct action and rushed into the streets.

Although schoolchildren are usually taught that the American Revolution was a rebellion against “taxation without representation,” akin to modern-day conservative taxpayer revolts, in fact what led to the revolution was rage against a transnational corporation that, by the 1760s, dominated trade from China to India to the Caribbean, and controlled nearly all commerce to and from North America, with subsidies and special dispensation from the British crown.

As noted in “Retrospect of the Boston Tea Party with a Memoir of George R.T. Hewes, a Survivor of the Little Band of Patriots Who Drowned the Tea in Boston Harbor in 1773,” Hewes notes, “The [East India] Company received permission to transport tea, free of all duty, from Great Britain to America…” allowing it to wipe out New England-based tea wholesalers and mom-and-pop stores and take over the tea business in all of America.

The citizens of the colonies were preparing to throw off one of the corporations that for more than a century had determined nearly every aspect of their lives through its economic and political power. They were planning to destroy the goods of the world’s largest multinational corporation, intimidate its employees, and face down the guns of the government that supported it.

That night, Hewes dressed as an Indian, blackening his face with coal dust, and joined crowds of other men in hacking apart the chests of tea and throwing them into the harbor. In all, the 342 chests of tea — over 90,000 pounds — thrown overboard that night were enough to make 24 million cups of tea and were valued by the East India Company at 9,659 Pounds Sterling or, in today’s currency, just over $1 million.

In response, the British Parliament immediately passed the Boston Port Act stating that the port of Boston would be closed until the citizens of Boston reimbursed the East India Company for the tea they had destroyed. The colonists refused. A year and a half later, the colonists would again state their defiance of the East India Company and Great Britain by taking on British troops in an armed conflict at Lexington and Concord (the “shots heard ‘round the world”) on April 19, 1775.

That war— finally triggered by a transnational corporation and its government patrons trying to deny American colonists a fair and competitive local marketplace — would end with independence for the colonies.

The revolutionaries had put the East India Company in its place with the Boston Tea Party, and that, they thought, was the end of that. Unfortunately, within 100 years, during the so-called Gilded Age, powerful rail, steel and oil interests would rise up to begin a new form of oligarchy, capturing the newly formed Republican Party in the 1880s, and have been working to establish a permanent wealthy and ruling class in this country ever since.

This is excerpted from, “The Real Boston Tea Party was an Anti-Corporate Revolt,” published April 15 on commondreams.org.