COCHABAMBA, Bolivia—Cries of “Bolivia has dignity, Bolivia is not a trashcan!” filled the Andean city of Cochabamba April 6 as factory workers from Bolivia’s micro textile industry took to the streets demanding that a decree be passed banning used clothing from the United States to be imported into and sold in Bolivia.

The ropa usada (used clothing) that mostly comes from the United States enters Bolivia through the Chilean border and accounts for around 90 percent of the clothing sales in Bolivia. Since 2000, an estimated 22,000 micro workshops have been closed as a result of rampant used clothing sales. 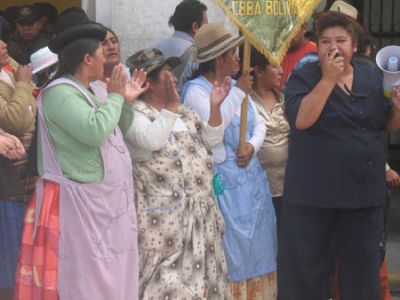 Several Sindicales Ropas convened in the Plaza de 14 de Sieptembre in Cochabamba, many of the workers dressed in traditional Bolivian garb, chanted outside of Cochabamba’s government building and burned a scarecrow-like doll dressed in second-hand clothes from the United States.

The union FEDEMYPE (Federacion Departamental de Micro y Pequeña Empresas) (The Federation of Micro and Small Enterprises) demanded support and protection from the governmental prefect against used imports, which, they say, are crippling their industry.

Carola Zambrana, union representative and protest organizer, says that the protest was unsuccessful in that used clothes may still be imported and sold. She says FEDEMYPE is planning more April demonstrations in Cochabamba as are clothing unions in Santa Cruz and La Paz. She argues that as the poorest country in South America, which can in no way compete in the world of exports with the size and speed of factories in Mexico and Southeast Asia, Bolivia needs an internal industry to survive as a country. 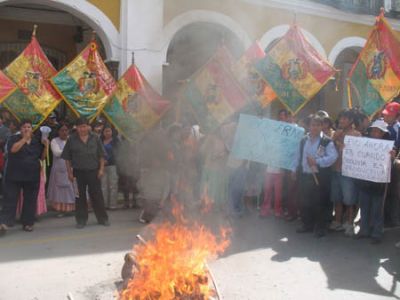 Following the protest by the clothing workers was a counter-protest by ropavejeros (used clothing vendors), whose livelihood depends on the thousands of tons of used clothing imported into Bolivia each year. There is no saying exactly how many jobs used clothing sales provide, since many of the sales occur in the informal sector, but one of the ropavejeros’ unions estimates 15,000. The ropavejeros were protesting MAS’s (Movement Towards Socialism) potential requirement of integration in their new decree — within the next five years, they may be required to integrate a percentage of new clothing into all of their sales, which could lose them money. Additionally they demanded a decree to insure that imports of used clothing will continue.

When asked why she was marching, Pamela Patzi, a worker at Ropa Americana, a used clothing store, said simply, “It is my job and I will protect my job.”

Currently, there is no law by which either group feels sufficiently protected. Workers in the used clothing industry have been pushing Morales and MAS to pass some law that gives them job security since he stopped trade with the United States. While new clothing micro-manufacturers (many of whom work out of their home) have been appealing to Morales´campaign talking point about a “Dignified Bolivia.” For him, this translated in part into retaining Bolivia’s rich historical tradition of textile manufacturing and design. At his first meeting with world leaders after being elected, Morales sported a traditional, colorful, striped, Amyran sweater in place of a suit. Furthermore, it is considered bad luck in Amarya culture to wear someone else’s clothes. 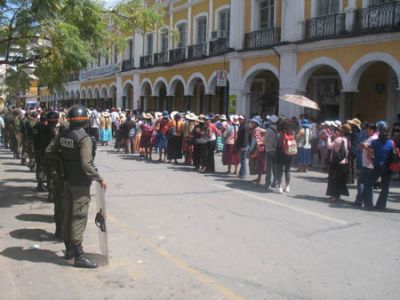 The reality remains, however, that used clothing sales account for a huge number of jobs in a country constantly battling climbing unemployment rates, as well as help to keep the majority of Bolivians clothed. A Bolivian-made shirt may sell for around $8.00, while it’s possible to buy its used U.S. equivalent for about 60 cents. Most Bolivians, who live on less than $100 a month, simply cannot afford new clothing, as much as they may want to. Ironically, that sweater that Morales wore was made from acrylic, not the traditional alpaca, which is too expensive and is now sold mostly to tourists.

While the situation is complicated, it seems clear that those on either side of the line will continue to struggle for their livelihood. 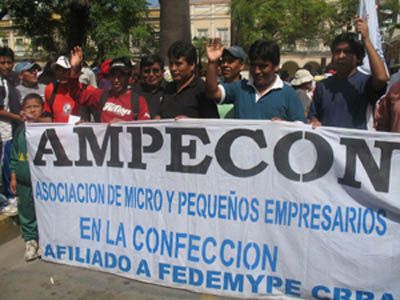 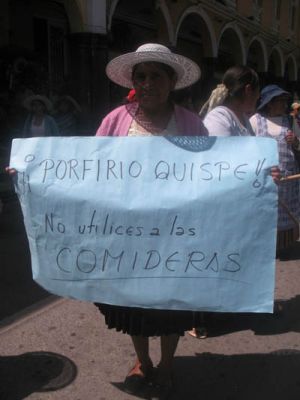