The government has committed trillions of dollars to bail out Wall Street in less than a year. And as the Obama administration and the corporate elite bicker over what money goes where, those most affected by the economic crisis have been seemingly shut out of negotiations.

Caught in between the finger-pointing and bank bailouts are the communities that are absorbing the brunt of foreclosures and rising unemployment. But this May 1, the unemployed, the homeless and immigrants are taking their demands to the streets.

The New York May 1st Coalition, a committee of more than 40 immigrant and worker rights organizations in the New York region, will rally at noon at Union Square to celebrate International Workers’ Day (May Day) and to hold President Barack Obama accountable on his 100th day in office. 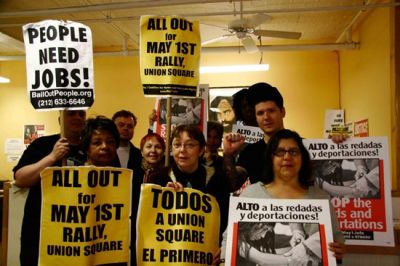 STANDING TOGETHER: Members and supporters of the New York May 1st Coalition. PHOTO: THOMAS MARCZEWSKI

May Day is a holiday to honor the social and economic achievements of labor movements worldwide, and is a day to rally for ongoing struggles. The day was immoralized by the chaos and violence during a massive labor rally in Chicago’s Haymarket Square May 4, 1886. The holiday, however, has since lost much of its significance within the United States.

In 2006, 120 years later, factory workers were joined by social justice advocates and immigrants in what became known as “A Day Without an Immigrant.”

“It was almost natural for the immigrant rights movement, that was basically a working-class movement, to have chosen that day, and almost resurrected it here in the U.S.,” said Juan Gonzalez, co-host of Democracy Now! and columnist for the New York Daily News, who has written extensively on immigration issues.

On May 1, 2006, thousands of stores were closed and factories were halted as millions of immigrants across 200 cities boycotted work and marched into the streets. This outpouring helped defeat the Sensenbrenner bill (H.R. 4437), which would have made it a felony to be in the United States without documents and applied criminal sanctions against anyone who provided services to the undocumented.

“In 2006 we were victorious,” said Teresa Gutierrez, a coordinator with the May 1st Coalition and Workers World Party Secretariat member. “We did stop the Sensenbrenner legislation.” But the following years brought only reprisals from the Bush administration, said Gutierrez. “There was further repression through raids, deportation, the empowerment of local law enforcements to hunt down immigrants, [engage in] racial profiling and so forth,” she said.

This year, immigrant rights activists hope to make Obama fulfill his promise to pass comprehensive immigration reform. The May 1st Coalition is demanding an end to raids and deportations, and the legalization of the more than 12 million estimated undocumented immigrants in the United States.

But this year, in light of skyrocketing unemployment numbers, waves of foreclosures and the state of the current economy, immigrants will not be marching alone. “The economy will help mobilize more people because they need to express their unhappiness with the current situation,” said Carlos Canales, an organizer at the Workplace Project, part of the May 1st Coalition.

“Additional forces are coming out with immigrant workers,” said Sara Flounders, coordinator at Bail Out the People (BOTP) and also a secretariat member of Workers World Party. “It’s not entirely an immigrant rights demonstration.”

On April 3 and 4, BOTP organized protests on Wall Street, urging the government to bail out the people, not the banks. “That [day] was the anniversary of Dr. King’s assassination and his demand for jobs for all working people,” Flounders said. “He didn’t make a distinction. And in that same spirit [we] take the next important anniversary, which is May 1, as a workers’ day and use it to build solidarity.”

But while the economy may help build coalitions that cut across racial and class divides, challenges remain. “The predisposition of the U.S. populace to support a just immigration reform is not going to be very deep,” said Roberto Lovato, a contributor to The Nation magazine and New American Media, a national collaboration of 2,000 ethnic news organizations. Lovato is the former executive director of the Central American Resource Center, a Los Angeles-based organization focusing on social and economic empowerment for immigrant communities.

“These are our brothers and sisters,” Hales said, who is working primarily with students at City University of New York (CUNY), “and especially in this kind of environment, we fight for everyone’s rights so there’s no one left to exploit.”

Activists are reaching out to non-immigrant workers to build a broad-based social movement capable of pressuring the economic elite. “Race and immigration are used as wedge issues to drive similarly disadvantaged communities apart and lower overall support for policy they might benefit from,” said Maya Wiley, director of the Center for Social Inclusion. 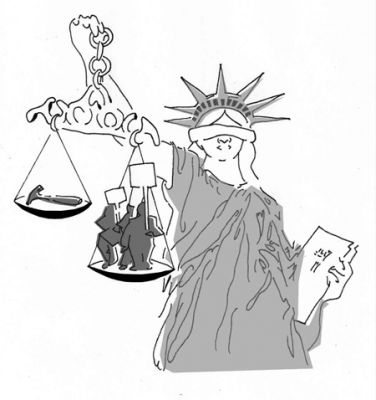 The Obama administration announced if would begin talks on immigration reform in May. While the details have yet to be revealed, officials say the legislation would favor a process for the legalization of undocumented immigrants already living in the United States, while increasing enforcement of the border and cracking down on employers who hire undocumented workers.

This approach equals “trading off legalization for increased militarization, increased deportation and increased jailing,” Lovato said. “If you limit the discussion of immigration within these borders, you’ve already lost. It’s a false approach, when in fact there’s global factors that are fundamental.”

Analysts say comprehensive immigration reform must take into account the economic, social and political forces that cause migration. U.S. policies “drive businesses to set up their factories in China, in India, in Mexico and Vietnam, [which] is the same impulse that is driving workers from those countries to the West to seek higher wages,” Gonzalez said. “The problem is that [the financial elites] want to lower barriers for capital while increasing barriers to labor.”

“These periods of anti-immigrant hysteria and fervor are not uncommon in American history,” Gonzalez said. “The main difference this time is the massive response and protests by the immigrants themselves.”

With the global crisis disproportionately affecting workers and immigrant communities, this year’s May Day will be an opportunity for change to come from below.

To read more about the ongoing struggle for immigrants’ rights in this issue of The Indypendent, check out these two articles by Karen Yi: “Injustice Behind Bars” and “Dreams Day-By-Day”