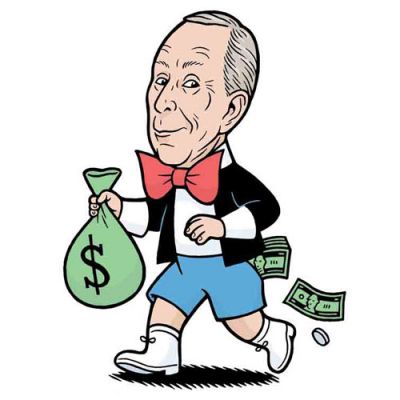 Mayor Michael Bloomberg is trying to buy re-election to a third term. The city’s economic and media power elites have already anointed him.

Bloomberg is expected to spend about $80 million on his campaign. That’s not even $10 a person. Considering that the mayor is worth about $16 billion, it’s pitiful.

What do the people of New York City get for that $80 million? A pittance. TV attack commercials, robocalls, back-page ads in neighborhood weeklies and glossy, full-color campaign brochures that give mail carriers bad backs and go straight to landfills.

We want a better deal. If he’s going to buy the election, let’s at least get a decent price for it. For the $11.5 billion he has added to his fortune since elected mayor in 2001, we’d be willing to cancel the election and crown him mayor for four more years.

Under Bloomberg, the gap between the rich and everyone else has widened so much that if Manhattan were a country, it might beat out Namibia for the title of the most economically polarized in the world. Developers have packed New York’s skyline with luxury condos. Landlords have driven tenants out of their homes all over the city to jack up rents. The symbol of Bloomberg’s New York is city parks where drinking fountains don’t work, but there are plenty of pushcarts peddling pints of bottled water for $2.

The mayor sees all this as both pragmatic and righteous — what higher purpose could there be than maximizing real-estate values? His vision of the city is turning it into a slightly greener, pro-Israel version of Dubai. If reelected, he will continue to serve the interests of the ultra-rich.

So let him put some real money into buying the election. Let him pay for the value he’s getting.

What could $11.5 billion buy for the people of New York? The Metropolitan Transportation Authority’s annual deficit is now estimated at almost $2 billion. For $6.5 billion, Bloomberg could avert a fare increase and prevent service cuts for the next four years.

The city has a critical housing shortage. For $3.5 billion, he could pay for 35,000 new apartments of affordable housing. This would create thousands of construction jobs and allow many working families to remain in the city.

That would still leave another billion for the schools, and $500 million for job programs, alternative energy and more. We could restore the $4 million cut from AIDS programs last year or reopen the public-housing senior centers closed to save $18 million. Bloomberg, who touts himself as the consummate expert manager who only wants the best for the city, found those programs too costly — while he was giving the Yankees and Mets almost $1 billion in subsidies to build new stadiums where only Bernie Madoff can afford front-row seats.

Many people think Bloomberg is a “liberal” because he’s not as blatantly racist as former Mayor Rudolph Giuliani and not as fanatically anti-gay as the national Republicans. Well, if a gay black investment banker wants to buy a $3.4 million condo on the Greenwich Village waterfront, the mayor would roll out the red carpet. But if Keisha the teenage butch wants to hang out on Christopher Street because it’s safer to be herself and easier to meet girls there than in Brownsville, she’s part of a troublemaking element that must be stamped out.

Bloomberg is not a liberal. He’s a devout plutocrat. He strongly opposes raising taxes on the rich, even to avert a massive subway-fare increase. Instead, he wants to raise the city’s sales tax. So a struggling single mother would have to kick in an extra quarter to get her kid a $50 pair of sneakers, but millionaires wouldn’t have to pay a penny more in income taxes.

“We want the rich from around this country to move here. We love the rich people,” he said on his radio show in March. “I don’t know what ‘fair’ means. You can argue that if you make more money, you deserve more money.”

Yes, $11.5 billion would be a big hit on the mayor’s personal fortune. It would knock him from 17th to 110th on Forbes magazine’s list of the 400 richest Americans. He’d be as impecunious as Ross Perot.

Bloomberg would have to scrape by on a paltry $4.5 billion — the same fortune he had in 2001, before he took office. But he could console himself with the knowledge that he spent his money on building a better city for all New Yorkers, instead of merely pumping out endless rivers of propaganda claiming that he’s done so.

BILL TO BLOOMBERG TO HELP SAVE THE CITY:

$2,590,000,000 – Cover CUNY budget for a year while also paying tuition for all CUNY undergraduate students

For generations of New Yorkers, a college education at the City University of New York (CUNY) has been the path to a better life. But with the cost of higher education soaring while the economy plummets, few are in a position to do more to shore up the dream of a college education for the children of working class New Yorkers than Michael Bloomberg. If only the self-styled “education mayor” would put his money where his mouth is:

Seventy-six percent of CUNY’s community college students come from households that earn less than $40,000 per year.

For another $28, 538,300, Bloomberg could cover the $350 tuition increase that is being proposed to take effect next fall at CUNY community colleges.

Mayor Bloomberg’s key rationale for scrapping term limits and thus allowing him to run again was that he was best able to steer the economy through crisis.

“The bottom line is we face some tough times. I’d be honored to run again and if I’m voted [in] again, I’d be honored to serve,” Bloomberg said in October 2008, a month before the City Council, in a 29 to 22 vote, gave him the go-ahead to run for a third term. “This is a chance to continue the direction the city has been going in.”

He has a point. Bloomberg’s stewardship of New York City’s economy has been good — for Wall Street plutocrats and rich developers. According to census figures released in August 2008, the richest fifth in Manhattan made nearly 40 times more than the poorest fifth in 2005: $351,333 compared to $8,855.

Bloomberg’s civil liberties record is excellent as well — for the NYPD, whose repressiveness has increased under Bloomberg. Hundreds of thousands of people of color continue to be racially profiled by the NYPD, and the police’s conduct at the Republican National Convention 2004 has thus far resulted in the city paying more than a million dollars to settle lawsuits from illegally arrested protesters.

$4.5 billion: Bloomberg’s net worth in 2001, the year he took office, according to Forbes.

#1: Bloomberg tops the list as the richest person in New York

Over 8,000: The number of homeless families with children who sleep in city-run shelters each night; the highest ever recorded.

6: Number of residences around the world the mayor owns — upstate New York, Colorado, Florida, Bermuda, London and the Upper East Side of Manhattan.

$400: Amount per night to stay at the Four Seasons Hotel in London, where Bloomberg puts up his aides.

5: Percent of affordable housing that will be available as part of Bloomberg’s rezoning of 125th Street, compared with the promised but flawed number 46 percent.

$850 million: Amount of taxpayer investments for the new Yankee Stadium.

1: Number of parks in the Bronx operating by the opening day of the new Yankee Stadium to compensate for lost park land it was built on.

943: Library jobs to be cut under Bloomberg’s proposed 2010 budget.

$83 million: Amount in budget cuts proposed for 2010 to the Administration for Child Services, even as reports of abuse and neglect increase.

86,705: Number of people stopped by NYPD in 2001, the last year of the Giuliani administration. 73 percent stopped were Black or Latino.

1,806: People arrested by NYPD during the Republican National Convention in 2004.

90: Percent of people arrested during the Republican National Convention who saw their charges dropped.