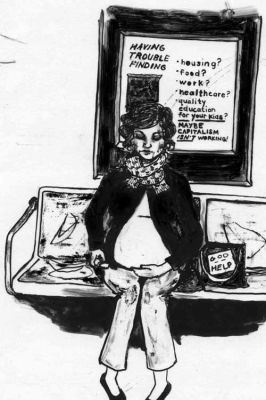 I admit to being a thick-skinned New Yorker. After nearly 40 years living here, there is little that can happen in this city that would evoke an emotional response. This is particularly true in the subways. Rats run across the tracks. People commit any number of lewd public acts on a daily basis. Just a month ago, a drunken fellow passenger decided to convert the subway into a urinal. Fleeing passengers seemed to revel more in the spontaneous camaraderie of the experience than disgust in the offensive act. Things changed during a recent ride on the 6 train.

In the past few months, there has been a noticeable difference in the homeless population I have encountered above and below ground. Most New Yorkers (myself included) have become accustomed to the city created during the violent regime of former New York City Mayor Rudolph Giuliani. Intent on enforcing his “quality of life” agenda, Giuliani used the police to drive the homeless out of public view. The severity of the economic crisis is reversing this. The homeless are back in New York City. There are more homeless, many more — new people with fewer of the habits and appearances of hardened street people.

On April 3, I rode the 6 train downtown to participate in a protest against Wall Street. A woman entered the train at 42nd Street. She appeared to be in her late 20s, neatly dressed, with all appearances of a sturdy working-class person. Noticeably pregnant, she had a clean jacket, relatively new shoes and neat hair. As she sat down, I and others noticed a handwritten note clipped to her bag. It read, “I have a six-year-old girl. I am pregnant. We have been forced into a homeless shelter. Please, God help.” She sat with a hand out meekly looking for donations.

The role of a public beggar was too much for her to handle. After a few moments, she began to sob. She cried deeply, the kind of crying normally reserved for the most intense, private moments in your life. Tears streamed down her cheeks. We were witnessing the destruction of another human being’s identity — her self-respect poured out one tear at a time. Passengers tried to help by placing dollar bills in her hand or offering a tissue to wipe her face. Dollars and tissues could not solve this problem.

I sat across from her, paralyzed. Sure, I was off to a demonstration to condemn the economic crisis that likely forced her and her children into the street, but what could I do immediately? I left the train quite shaken. As it pulled away from the platform, I turned to catch a final glimpse of the woman slumped in the seat, still crying.

This woman is not alone. Homelessness is clearly on the rise in New York City. The city’s Department of Homeless Services has reported a more than 20 percent increase in requests for shelter each month since September. Food pantries throughout the city are reporting high demand and declining donations as the economic crisis deepens. Scheduled budget cuts will simply accelerate the problem. Mayor Michael Bloomberg plans to cut a program that offers mediation between distressed tenants and landlords to prevent homelessness. If it wasn’t bad enough, Bloomberg also proposes to cut the home cleaning products provided to people leaving the shelter system.

No need for a socialist sermon here. The situation this woman has been put in is a clear illustration of the inhumane currency of capitalism. Destroying her self-esteem and endangering her children, born and unborn, does nothing to improve society. It dehumanizes everyone by forcing us to rationalize things like human suffering brought on by homelessness.

There are, however, those of us who refuse to see something rational or inevitable in this woman’s condition. For this woman on the 6 train I dedicate my mind, my hands and my heart to building a democratic socialist society in which she can enjoy guarantees to things like housing, healthcare and useful work. This would be a new social basis of freedom from which to build an identity. In the meantime, the economic crisis will produce many more instances of human degradation. The choice is ours: Grow thicker skin or more justice.

Billy Wharton is the editor of the Socialist Webzine. His article, “Obama is No Socialist. I Should Know,” appeared in the Washington Post March 15.