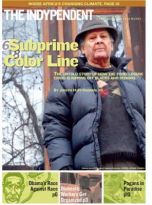 Indypendent reporter Joseph Huff-Hannon was honored with a 2008 James Aronson Award for Social Justice Journalism for his investigative story into how Brooklyn African-American senior citizens were targeted by the subprime lending industry. The awards are named in honor of James Aronson, Hunter College professor and legendary editor from 1947 to 1967 of the newsweekly The National Guardian. Indypendent contributor Sarah Stuteville also won the Aronson Award for Best Student Journalist in 2005 for her reporting on private military academies in Brooklyn.