Concentration camps, totalitarian communist rule, forced child labor in the coal mines… So many aspects of the deplorable living conditions in North Korea resonate as an anachronism, a kaleidoscope of bad memories from the past century. To make a musical out of all this seems shamelessly in tune with today’s instant commodification of humanitarian crises, but in Yodok Stories, a must-see documentary that debuted at this year’s Tribeca Film Festival, it proves an apt means to an end. The project of esteemed Polish documentarian Andrzej Fidyk is to put the North Korean crisis on the map by reversing the message channeled through Chairman Kim Jong-il’s propaganda machine.

Confronted with a complete lack of record, testimony or access when developing the idea for a film about the camps, Fidyk was inspired by footage of the Mass Games — a stunningly choreographed performance spectacle staged as national celebration — he shot for The Parade (1989), so he decided to try to find a North Korean theater director who had defected and would be willing to helm a subversive theatrical counter-production to this extravaganza. Thus started his collaboration with Jung Sun San, an escapee from the notorious camp Yodok, whose experience forms the backbone of Yodok Story, the musical, the making of which forms the backbone of this film. 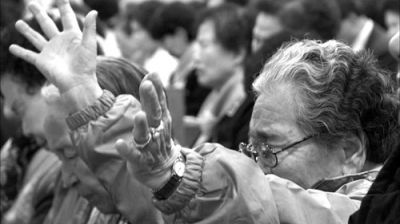 Fidyk’s film alternates between rehearsal sessions and testimonies by other former prisoners that flesh out the harrowing, invisible reality of camp life. Among the seven stories highlighted is that of a former camp guard, whose jovial interaction with people who used to be at the mercy of his random abuse feels entirely surreal. What binds these exiles together are the absurd reasons for their imprisonment — as arbitrary as dropping a paper with a picture of Kim Jong-il on the ground — and the relatives they had to leave behind without any prospect of reunion. The state dictate of “guilt by association” leads a former bodyguard of Kim Jong-il to stop talking to Jung Sun San after he finds out Jung Sun San’s family back home has been arrested. The man divulges how the emotionally stunted “Great Leader” was never taught care or concern for anyone else’s suffering, a state of arrested development that has translated into the country’s deprivation.

North Korea’s isolation is not only imposed from within. Its neighbors to the south are either ignorant or skeptical of the plight of North Koreans. (The young cast members of Yodok Story look thoroughly bemused when listening to the former inmates’ tales of suffering.) Globally, as Fidyk asserts, the only interest in North Korea relates to the nuclear threat posed by Kim Jong-il’s regime. That aside, there is little to be gained from the liberation of 20 million starving, technologically-backward people. Therefore the South’s rhetoric of hoped-for reunification is tinged with hypocrisy, and the North seems destined to remain an eerily latent presence in the “free” part of Korea, like the menacing anonymous text messages Jung Sun San receives on his cell phone.

June Sun San takes the camp survivors into the demilitarized zone between the two countries to observe the other side from within walking distance, where he advertises his show to the North Koreans by packing postcards into balloons and surreptitiously setting them adrift on a favorable wind from the graveyard that is the closest point to the North. Closing credits tell us that Yodok Story became one of the most successful productions ever staged in South Korea. Until it hits Broadway, this concise, sobering film is the sole international exposure of the boldness of its agenda.