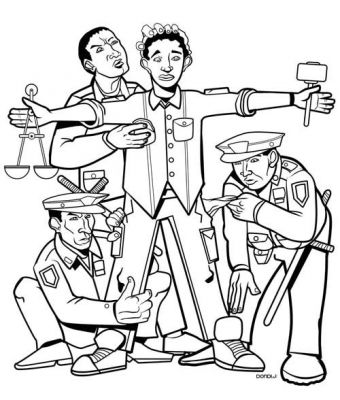 As a result of investigations by former New York State Attorney General Eliot Spitzer and lawsuits by the Center for Constitutional Rights (CCR) and the New York Civil Liberties Union (NYCLU), it is now known that nearly 90 percent of the people stopped are Black, Latino or Asian and that in 90 percent of cases the person stopped was released without any accusation of illegal behavior.

Intensified under former Mayor Rudolph Giuliani, stop and frisks have surged under Mayor Michael Bloomberg. CCR testified at the hearing that the NYPD recorded 535,123 stops in 2008, “82 percent of which involved Black and Latino New Yorkers,” even though they only make up 50 percent of the population. CCR added that under Bloomberg, police stops have “increased more than 500 percent while the tremendous racial disparity in who gets stopped has persisted.”

Police Commissioner Raymond W. Kelly skipped the hearing before the City Council’s Public Safety and Civil Rights Committees, sending an underling, who was instructed to read a letter but not to take any questions.

The day of the hearing, the NYPD announced a program in Harlem, the South Bronx and East New York to hand out slips of paper to those stopped. According to The New York Times, the paper lists reasons why they were stopped, including, “reasonable suspicion that the person ‘has committed, is committing or is about to commit’ a crime … ‘[is] carrying what appears to be a weapon,’ and ‘sights or sounds suggestive of criminal activity (ringing alarm, running from crime scene).’”

City Council Public Safety Committee Chair Peter F. Vallone Jr. (D-Queens) commented that the NYPD tends to announce policy changes “on the eve of a public safety hearing, which then slants coverage of the hearing toward their new policy.”

Civil liberties groups say they are troubled that hundreds of thousands of young men who have been stopped have had their names permanently entered into a police database. NYCLU Director Donna Lieberman said, “The NYPD’s collection and retention of this information represents a violation of the privacy rights of New Yorkers, may be illegal and — given that the individuals stopped are disproportionately Black or Hispanic — raises major concerns about racial profiling. People who have done nothing wrong should not be in a police database.”

Nicole Smith, an attorney at the Bronx Defenders, added that many of the police stops fail to meet legal standards and are often a form of illegal harassment. In addition, these stops can often turn into arrests because of illegal searches or police harassment of those who question or resist illegal police actions. Smith also raised concern about whether the police make bogus arrests to bolster their overtime or productivity numbers. These arrests can lead to people losing their jobs, getting kicked out of public housing and being deported.

Both Mayor Bloomberg and Democratic Party mayoral candidate William Thompson have avoided discussion of policing issues. In contrast, Reverend Billy Talen, Green Party candidate for mayor, has taken a strong stand against “stop-and-frisk” policing, as well as racial profiling and harassment of LGBTQ people by the police, a problem brought up at the hearing by Dru Levasseur from the Transgender Legal Defense and Education Fund.