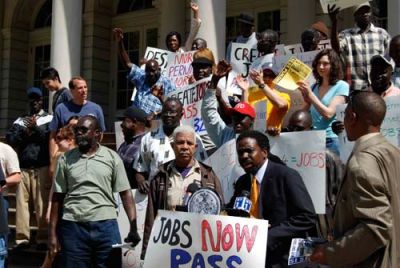 For 19 years, Mustafa, an immigrant from Senegal, has been waiting to receive a vending license from the New York City Department of Consumer Affairs. According to the Street Vendor Project, he is one of 13,000 people on the waiting list. After years of waiting, Mustafa has begun selling art in lower Manhattan without a license.

The city caps merchandise vending licenses at 853 and food permits at 3,100 — the same level since 1979 — leaving small entrepreneurial New Yorkers with few alternatives but to sell their products without a license.

More than 40 street vendors rallied on the steps of City Hall April 28 urging the New York City Council to pass the bill, known as Introduction 324, which would create more than 10,000 legal jobs by increasing the number of vendors allowed on the streets, raising numbers for general merchandising to 15,000 and food permits to 25,000, with a provision to increase the number by 5 percent each year afterward.

Intro 324 was introduced in 2006 by Councilmember Charles Barron (D-East New York) and so far has 11 co-sponsors. But even after its Council hearing in November 2008, the bill still has not been passed.

Workers at the Urban Justice Center’s Street Vendor Project say they are getting a record number of calls requesting assistance in getting street vending licenses. With the current economic recession, they say, now is the time to push the bill to the forefront.

“Each day we deliver the disappointing news to dozens of cash-strapped New Yorkers … that they are out of luck,” said Michael Wells, co-director of the Street Vendor Project, composed of more than 750 street vendors working together to create a movement for permanent change.

This legislation concerns Ivet Bandirma, executive director of Esperanza Del Barrio, an organization that serves to empower street vendors in New York City. Bandirma said that S04045 is “a direct attack on the immigrant population.” It is estimated that more than 80 percent of street vendors are immigrants.

Fingerprinting immigrant vendors puts them in direct contact with the criminal justice system, explains Bandirma, and once immigrants are in the system, U.S. Immigration and Customs Enforcement is contacted.

Having met with community groups opposed to the bill in the past several weeks, Squadron has made it clear that this is not an anti-immigrant bill, but rather a way to allow the city to enforce its laws better.

“There is no question the current system is not working for anyone — vendors, local businesses, pedestrians, or communities,” Squadron said. “That’s why I’m working with advocates and others for comprehensive vending reform that is fair, protects the rights of immigrants and improves the system for everybody.”

But protecting immigrants is just one concern, vendor advocates explain. “It’s just wrongheaded,” said Ali Issa, an organizer with the Street Vendors Project. “The approach has nothing to do with the causes of the problem at all, of why people vend without a license.”

“We have some hard-working people, and all they want is the opportunity to work,” said Douglas Lasdon, executive director of the Urban Justice Center, a nonprofit that advocates on behalf of New York City’s most vulnerable communities. “There really is no legitimate policy reason for them not to have that opportunity.”