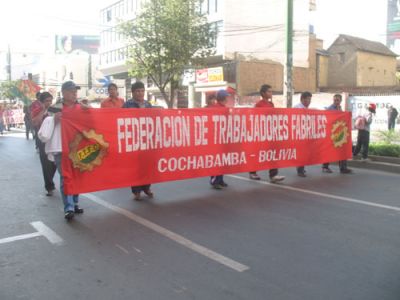 Members of the Bolivian Federation of Factory Workers of Cochabamba rally May 1 in a May Day “March to Reclaim Work, Identity and Memory.” PHOTO: LIZA MINNO BLOOM

—Oscar Olivera has become a name synonymous with the anti-globalization, anti-privatization movement. Olivera is known for his role in the former organization, Coordinadora de la Defensa del Auga y Vida (Committee in the Defense of Water and Life), when the group helped organize the campaign that kicked multinational corporation Bechtel out of the country in 2000 to keep them from privatizing the city of Cochabamba’s water. Known as ’s “Water War,” the victory become legendary throughout the world. Olivera is author of ¡Cochabama!: Water War in .

Olivera was the recipient of the Institute for Policy Studies’ Letelier-Moffit International Award for Human Rights Activity. He founded the open school, Primero de Mayo. In addition, he is the founder and Executive Secretary of the sindically-run union Federación de Trabajadores Fabriles de Cochabamba (F.T.F.C) (Federation of Factory Workers of Cochabamba).

His life, since the age of 17, when he began working in a factory, has revolved around factories and organizing with workers. He has defined the anti-globalization movement in his own terms, saying, “The true opposite of privatization is the social re-appropriation of wealth by working-class society itself-self-organized in communal structures of management, in assemblies, in neighborhood associations, in unions, and in the rank and file.”

After the Water War of 2000, Olivera was fundamental in the “Gas War” of 2005, which resulted in the nationalization of hydrocarbons in and led directly into the overthrow of then-President Carlos and the election of Evo Morales’ Movement Towards Socialism (M.A.S.) party. Morales shared a background as a labor organizer and became ’s first Indigenous president.

Olivera, however, turned down a M.A.S. government position as utilities minister, preferring to continue organizing workers in the shoe factory, Manaco, where he has worked for more than 30 years.  Although he worked closely with now-President Evo Morales in both the Water and Gas Wars — although those uprisings were, in all likelihood the rising tide of popular, bottom-up power that ensured Morales´election — Olivera has maintained an autonomous line and has been an outspoken critic of Morales and the M.A.S. party. He has said bluntly that all nation-states — left, right or other — have a “deafness and blindness” to workers’ needs and rights saying, “We should always be closer to the workers than the government, even if we are in accord with the government.”

This May Day (May 1), in his city of , Olivera organized a march of more than 30 autonomous workers´groups from the city, called “La Marcha por la Revindicacion de Trabajo, Identidad y Memoria” (The March to Reclaim Work, Identity and Memory).

At the post-march workers’ fair at the new cultural center, Complejo Fabril, in between visiting tents of fellow workers to shake hands, cool off momentarily or share a quick dance with a compeñera, Olivera sat down with me for a brief talk.

With his country in political turmoil amidst assassination attempts on President Morales and ever-increasing terroristic violence from separatist, conservative opposition groups, Olivera spoke of the need to recover the collective identity of the worker through art, demonstrations and celebration, as well as of the possibility of solidarity with the global south. 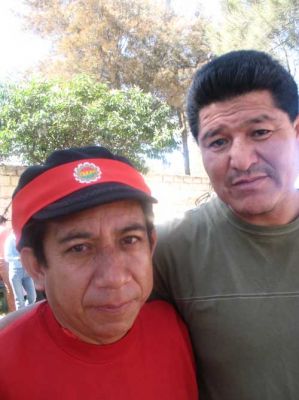 Bolivian labor organizer Oscar Olivera (left) and a compeñero at a worker’s fair after the “March to Reclaim Work, Identity and Memory” May 1 in Cochabamba. PHOTO: LIZA MINNO BLOOM

LIZA MINNO BLOOM: What does the name of today’s march “March to Reclaim Work, Identity and Memory” mean?

Oscar Olivera: We are celebrating and reclaiming the life of work. First of all, work is a daily activity that connects the whole world — not just us here in — everyone, from the elderly to children. … it is one of the most important parts of life. And work means decent work, it means earning a fair wage, it means housing, health and education. And the working life means that you get up every morning to your job, or to the anguish of not meeting the needs of you family. Work should be a thing that sustains us as human beings.

LIZA MINNO BLOOM: Can you talk about the people who marched today?

Oscar Olivera: All of the groups were autonomous workers’ groups. No employers forced anyone to march, it was all the decision of the workers for first time in 19 years [It is common in for workers to be required by their employer to protest … if they don’t they get a pay cut or some other penalty]. We started planning three months ago and we decided everything from the bottom up. We wanted to march as a group of humble people who are living a workers’ reality, which is generally not seen or heard about.

These mobilizations, making ourselves visible, are very important because it’s a way for us to recover the autonomy of the workers’ base and our historic love and potential to make change, without looking to the state. Today people are still making history, as yesterday, as the day before. People are blocking off the streets and highways to say that we are present … we are making history and we will change life. It is important to recognize what people are doing to make change for themselves, to maintain their lives and communities, beyond people saying that it’s too difficult. We need to celebrate what they are doing. Today, May Day, is a wonderful celebration, because we share the joy of workers the world over, as brothers and sisters. Celebrating is a necessary part of the struggle … of course there’s a time for tears, for sharing our complaints and pains, but today we are all happy, today we are celebrating what people are capable of — capable of creating, sustaining and surviving.

LIZA MINNO BLOOM: Does the F.T.F.C (Federation of Factory Workers in ) have specific demands of the government at the moment?

Oscar Olivera: The F.T.F.C. the workers of have a single demand of the government: Stop being deaf and blind. See that there are still a multitude of men and women, the people who changed history in 2000 and 2003 who are ready to do it again if we need to.

LIZA MINNO BLOOM: Can you speak to the nature of your work since the Water and Gas Wars?

Oscar Olivera: I am a mechanic and fix the machines in a shoe factory [Mananco]. But in a broader sense, I am heavily involved with the recovery of the territory. In a way, this is the fight of everyone in , recovering a territory to live their lives — factory workers, people working in the street, people who don’t work, children, the elderly. Beyond land, we all need a political territory. Having political territory is also part of having a place to live. We, the people, need a place to live that is governed by our own laws, rules that exist for the benefit of the people, so that we can live in peace and harmony and solidarity.

LIZA MINNO BLOOM: Can you speak to the possibility of solidarity between people in the Global North and the struggle in ?

Oscar Olivera: I think we’ve already had a lot of positive sharing between North and South. We’ve learned a lot in terms of organizing capacities, opposing wars, training activists. In my mind, at this point, North and South are arbitrary distinctions. I consider us brothers, our struggle against privatization is global and extends beyond the lines of North and South. There is a war in the South against multinationals moving down from the North. If those of us struggling against this globalization don’t identify each other as brothers and sisters and work together, we will never live in peace. If we do, I think that the possibility of saving the world from this destruction is in our hands.

LIZA MINNO BLOOM: Any more thoughts on May Day?

Oscar Olivera: Today is a very important day for us too, because we can remember the struggles of the past, the struggle for the eight-hour [work] day and celebrate, but know that the struggle continues. The eight-hour day is now a privilege that not everyone enjoys, because working 40-hour weeks isn’t enough to survive. We have to continue fighting to make the eight-hour workday livable for everyone. 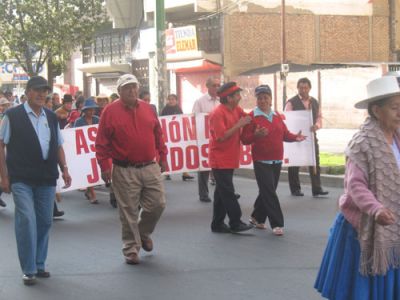