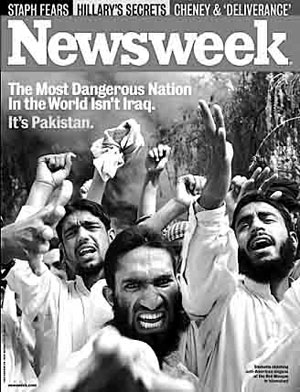 Times are bleak for the state of Pakistan, if the international media is to be believed. Since April, the world’s newspapers have charted the apparently unstoppable march of the Taliban toward Islamabad — with daily reminders that their forces are “only 100 miles” and then “only 80 miles” and then “only 60 miles” from the capital. That Pakistan is a “failed state” or “on the brink” no longer even requires elaboration: it is the universal consensus among pundits and “area experts” alike.

News articles have begun to game out the fall of the regime: The New York Times, hardly alone in its hyperventilating, has run two stories in as many weeks about America courting the opposition leader Nawaz Sharif as a replacement for Asif Ali Zardari’s government. The counterinsurgency guru David Kilcullen, a former adviser to U.S. General David Petraeus, has suggested that the state could fail within six months, while Petraeus himself warns that the coming weeks will be decisive, and that the army may have to return to power to prevent a total collapse.

The notion of Pakistan as a “failed state” has roots far deeper than the last few years; it was first deemed to have “failed” in the early 1960s, and this framework has dominated discussion of Pakistan in America from the days of the Cold War to the War on Terror. The surprisingly long history of the rhetoric of failure reveals that for the United States, the solution to Pakistan’s problems has always been, and will always be, the strong hand of a military ruler.

The “failed state” rubric dominated the 1990s, as Pakistan became a nuclear power while stagnating economically under the burden of crippling foreign debt. But the attacks of September 11 brought Pakistan back into the American fold as a “close ally in the War on Terror,” under the leadership of Pervez Musharraf, who took power in a 1999 coup. If Pakistan was on the brink of failure, few in America wanted to talk about it — at least until 2007, when Musharraf’s firing of the chief justice sparked street protests that eventually led to his resignation. The exiled leaders Benazir Bhutto and Nawaz Sharif returned to contest the state’s first democratic elections in more than a decade. Then the floodgates opened: a Newsweek cover story in October 2007 dubbed Pakistan, “The most dangerous nation in the world”, nicely setting the tone for everything we’ve heard since.

This tendency to reduce Pakistan’s complexity to either “failure” or “stability” reflects, above all, a glaring poverty of knowledge about the real lives of 175 million Pakistanis today. Since 2007 alone, they removed a dictator from military and civilian power without firing a single shot, held the first national election since 1997 — in which right-wing radical parties were soundly rejected — and launched a secular movement for justice.

None of this matters, we are told, because Pakistan is facing “an existential threat” from “violent extremists,” as a U.S. State Department spokesman said. U.S. generals and media commentators are hinting that a military takeover may be the only way to arrest the imminent “failure” — to combat the “Talibanisation” of Pakistan and keep the dreaded nukes from “falling into the hands” of terrorist groups.

A comically exaggerated version of reality underpins such concerns. There are roughly 400 to 500 Pakistani Taliban fighters in the Buner region (the area deemed too threateningly close to Islamabad) and 15,000 to 20,000 operating in the region between Peshawar and the north-west borders of Pakistan. Meanwhile, the number of active Pakistani army personnel ranges around 500,000, supported by an annual budget of approximately $4 billion.

Pakistan is neither Somalia nor Sudan, nor even Iraq or Afghanistan. It is a thoroughly modern state with vast infrastructure, a fiercely critical and diverse media, an active, global economy and strong ties with regional powers such as China and Iran. It is not a “failed state.”

Even if Pakistan is not going to capitulate to the Taliban, it does face grave dangers, and the “failed state” rhetoric — dangerous in its own right — forces our attention away from them. In Baluchistan, as a direct result of Musharraf’s heavy-handed military policies, a civil war has been brewing since 2005, and there is no military solution to that unrest. At the same time, anti-Americanism is rising across the country in reaction to the campaign of missile strikes from unmanned U.S. drones, which have killed nearly 1,000 civilians since August 2008. The drones have emboldened religious conservatives who decry “U.S. imperialism” at work in Pakistan, and they are gaining strength with every tally of civilian casualties.

The monotonous drone of “failure” implies that the fragile democracy currently in place is not worth preserving. It encourages the marginalization of the civilian government and boosts the claims of both the military and the militants. Pakistan’s salvation has never been and will never be in the military’s hands. The country’s future lies with the millions of Pakistanis who are working to sustain democracy — and what must be defended is their resilience and strength, to prevent the self-fulfilling prophecies of failure.

Manan Ahmed is a historian of Islam in South Asia at the University of Chicago. He blogs at Chapati Mystery. This article was excerpted from an article originally published in The National, a publication based in the United Arab Emirates.