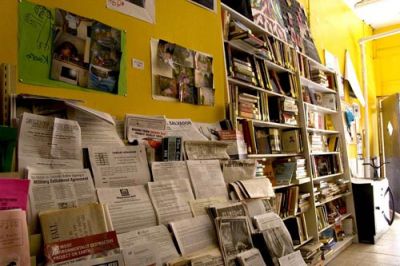 It is easy to see how the 123 Community Space, located in the Bedford-Stuyvesant neighborhood in Brooklyn, attracts kids. Handmade signs in the window lead into a room of beat-up, comfortable couches. Colorful artwork and political posters cover the walls above shelves lined with radical ’zines and books, which bear titles like No More Prisons. And perhaps most appealing is the long, narrow basement crammed with recycled frames, tires and tools of the Freegan Bike Workshop.

But it looks like the space will not be there much longer. Nearly two years after its doors first opened at 123 Tompkins Avenue, the community center is undergoing eviction proceedings in the Brooklyn branch of Civil Court.

Originally formed by four grassroots groups, 123 was envisioned as a common space for learning and organizing. With daily free public programs used by both adults and approximately 50 youths in the neighborhood, it would seem to be a success. Programs include a radical lending library, screen printing and sewing workshops, an afterschool program and the Bike Workshop, where anyone can get help building or repairing a bicycle. The space is also home to a chapter of Food Not Bombs and North Bed-Stuy CopWatch. In Our Hearts anarchist network and the NYC Anarchist Black Cross Federation are founding members of the collective. The space is run entirely by volunteers and funded by donations. Decisions are made by consensus at weekly meetings that are open to the public.

The last lease expired in December 2008, and 123, established as a Limited Liability Corporation last fall, has been unable to re-negotiate a new one, paying month to month in the interim. The acting building manager, Yoel Friedman, who is the son of the owner of the management company, Tompkins Villas, stated that the tenants never satisfied an undisclosed stipulation in the lease.

Quinn Hechtkopf, of the Bike Workshop, claims the group was approached by the landlord in March with the demand that they purchase a $2,000 one-year rental insurance policy from one of Friedman’s associates, though the group could only negotiate a three-month lease. A few weeks later, in early April, eviction papers were shoved under the door. Friedman declined to comment on the insurance policy.

Members of the collective indicated a variety of reasons they feel may have contributed to the landlord’s decision, ranging from racism to unwillingness to make repairs and the refusal of the landlord to recognize the LLC.

Volunteer Stephane Barile stated that at the first eviction hearing May 19, the judge described 123’s representatives as “good, clean-cut kids,” asking the complainants, “Why would you want to kick them out?” Barile said that Tompkins Villas’ attorney indicated simply that the “relationship had soured,” although, she added, 123 is “paying above-market rent right now and we pay that on time.”

Friedman confirmed that 123 has never been delinquent in paying the $2,000 monthly rent. Commercial real estate law, however, gives the now-leaseless 123 little protection. Tompkins Villas is attempting to evict 123 through a “holdover case,” in which a landlord seeks to evict a tenant for reasons other than simple non-payment of rent.

Volunteer and Bed-Stuy resident Sandra Cacho said that both of her sons attend 123 programs regularly. The closing of the space would “push a lot of kids into the street, which is something we’re already dealing with anyway,” she said. Cacho also mentioned that there is no local alternative. “I just can’t see myself not putting up a fight for something that my kids love,” she said.

Friedman also acknowledged that 123 is “a good thing for the community,” but that it needs “better management” in the future.

The 123 collective is seeking a new location and volunteers expressed commitment to continuing their work. But relocating the community space represents the loss of much invested labor, and volunteers say the move will intrinsically change the nature of the project.

“There’s no way that 123, as it stands, could exist anywhere outside of that immediate neighborhood,” said Margie Grace, a 123 founding member. She noted that while volunteers can commute to a new spot, it will affect the kids who need a stable and proximate location.

It is expected that the next eviction hearing on June 25 will legally end 123’s tenancy.

Shawn, age 9, lives around the corner and visits the space every day after school. Without 123 in his neighborhood, Shawn says, “I would have to be in my house every day bored. Bored, bored, bored.”