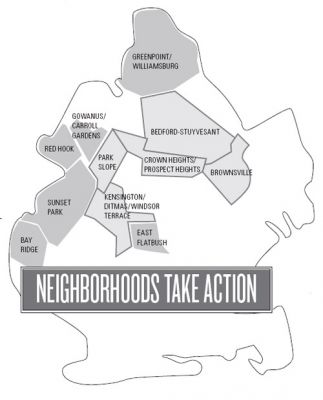 As her three kids crawled around her legs, a young Brooklyn mother testified that she could not afford food in her neighborhood of Bedford-Stuyvesant. Assembled community members nodded knowingly, recounting their long treks to food cooperatives in other neighborhoods and lamenting the ubiquity of unhealthy eating habits.

The group had gathered in Magnolia Tree Earth Center in Bed-Stuy June 4 to discuss their local food system. The meeting was part of a new grassroots movement that is slowly spreading across Brooklyn in the wake of the borough’s first annual Brooklyn Food Conference, held May 2. Organizers hoped that the conference would help build a network devoted to increasing food democracy: equal access to healthy food produced under sustainable and non-exploitive conditions.

The conference catalyzed the beginning of a yearlong food justice campaign. Within a month of the conference, people have come together at the neighborhood level to envision what local food might look like in their communities. Meetings are held in the evenings, in an assortment of makeshift spaces — coffee shops, temples, community centers and classrooms.

“We decided at one point that having folks come to the conference, learn a bunch of information and then go home and go back to eating Doritos was probably not the best way to use this information and use these resources,” said Erica Lonesome, one of the conference organizers. Lonesome says that the movement is organized on a neighborhood level because each community knows best what its goals and needs are.

Another conference organizer, Ajamu Brown, emphasized the importance of making a Brooklyn-based food movement that reflects its varied communities. “How can we talk about food democracy when we’re not repping all these other neighborhoods in Brooklyn?” Brown said.

Six neighborhoods have held meetings thus far, with one more scheduled in June and at least four more in the works. While the organizational structure is still being determined, the goal is to have an overarching Brooklyn Food Coalition that brings together the work of each neighborhood and provides support for local projects.

PARK SLOPE: Meeting organizers assembled among chairs neatly arranged in concentric circles under the lofty roof of the Congregation Beth Elohim on the evening of June 11. Most belonged to the Park Slope Food Coop and many had a hand in organizing the conference. The focus of the meeting was toward building policy initiatives around sustainable food, improving school meals, setting local business standards and supporting projects in other neighborhoods. Issues of class were often raised in the discussion.

“We are in a neighborhood that has all this bounty. There are more restaurants and more food stores per capita than probably any place in Brooklyn,” said community member Jeff Heeks. “That’s an advantage and a privilege that we enjoy in this neighborhood,” he said.

“If affluent areas don’t tackle [school food], then it’s not going to get tackled in less affluent areas,” added Coop member Kathie Borowitz. “If we feel that a certain percentage of our work should be focused on Park Slope proper, then this kind of school initiative seems like a good idea because that would ultimately be something we’d like to see growing elsewhere.” Heeks also supported focusing efforts on Park Slope and suggested implementing a business rating system to encourage socially and environmentally responsible practices. 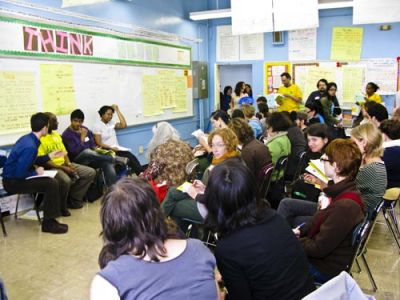 HEALTHY FOOD: Dozens crammed into a classroom at John Jay High School May 2 in Park Slope for a discussion on sustainablity and food justice at the Brooklyn Food Conference. PHOTO: JOHANNA BJöRK/GOODLIFER.COM

KENSINGTON/DITMAS/WINDSOR TERRACE: The small neighborhood meeting took place in a golden evening light that filtered onto the wood tables of Vox Pop café June 6. The group discussed a variety of issues, including transforming vacant lots into community gardens, food education and outreach, and policy organizing.

“A lot of people have their little gardens in this neighborhood,” said community member Kathy Schwarz. “But those of us who don’t … you know I look at them, I look at all of them, but I just don’t have access!” David Buckel, who organized the meeting, agreed, and noted that Kensington has many vacant lots that could be converted into community gardens.

The community has a local food co-op and a Community Supported Agriculture program, but meeting attendees agreed that food education would be beneficial to the community. They hope to organize cooking demonstrations and similar outreach events to get more community members involved with their food. “There’s something very visceral about seeing your food come out of the ground before it goes into your mouth,” said Brooklyn Food Conference organizer Erica Lonesome.

BEDFORD-STUYVESANT: A recurring theme of the June 4 meeting held at the art-filled Magnolia Tree Earth Center was the challenge of mobilizing such an expansive neighborhood. Bed-Stuy, which has 56 community gardens and a multitude of food programs, struggles to make healthy food accessible to all of its inhabitants.

“There’s a perception that fresh food is harder, and fast food is easier,” said Rev. Devanie Jackson, one of the co-founders of the Brooklyn Rescue Mission. “We need to change that through education. You got to come against generations of habits.”

Yonette Fleming, vice president of the Hattie Carthan Community Garden, spoke of the projects their new farmers market is implementing to address challenges. “We’re inviting community gardeners, backyard gardeners and rooftop gardeners to come under the same arrangement as our community garden and we’re doing our best to entice farmers that they will do business in Bed-Stuy. … Minority neighborhoods need fresh food,” she said.

At a follow-up meeting June 15, a smaller Bed- Stuy group moved in a decidedly more political direction, articulating the need for a philosophical framework and community education. At the next meeting, scheduled for July 14 at 6:30 p.m., they hope to hold an open training for community organizing.

BROWNSVILLE: “The people in Brownsville don’t have grocery stores to go to,” said Erica Lonesome. “They have to go out of their community to buy food.” She was one of the few people to attend the small Brownsville meeting, which was held at the Brownsville Branch Brooklyn Public Library. The overwhelming focus of the meeting was on improving school food and lunch programs for children.

PROSPECT HEIGHTS/CROWN HEIGHTS: The organizers at the meeting, overwhelmingly young women, clustered around tables jammed together in a classroom at the Brooklyn Botanic Garden on June 10. As canteens and notebooks crowded the tables, the attendees brainstormed about various local food campaigns.

The main concerns voiced in the meeting were the inaccessibility of affordable produce and healthy food, the lack of community gardens and the quality of public school food. “I walk around Brooklyn and I see little patches of ground and I think, ‘There should be food there,’” said Hope Kitts.

“Being in Crown Heights … the two healthy food options [that exist are] extremely expensive,” said community member Nicki Marshall, as the group discussed how to increase the availability of healthy local food. She also noted that, when picking up her Community Supported Agriculture share the day before, she had been one of only two people of color on site. “Why do the majority of people who live in this community not know about [the CSA program]?”

Noting the homogeneity of meeting attendees, community member Irene Shen observed that, “When we’re trying to deal with the barriers of race and class around these issues, I think that very specific and strategic thinking needs to occur.” Others echoed Shen’s concern and concluded that making the organizing committee more diverse was a priority for the group.

WILLIAMSBURG/GREENPOINT: Community members are working to organize the first meeting.

FOR MORE INFORMATION OR TO START YOUR OWN GROUP: brooklynfoodconference.org

For recent related coverage in The Indypendent see “Brooklyn Zeroes In On Food” by Jessica Lee and “A Taste for Change: Brooklyn Food Conference Organizers Step up to the Plate” by Aron Guy.