A “parade without a permit” marched with nearly 70 people the evening of Friday, June 19, from down in the Village. The Radical Homosexual Agenda

(RHA) organization commanded the parade and held signs high to commemorate the true spirit of the Stonewall riots in their third parade held with more than 51 people, and without a permit.

People participating in the march ranged from just passersby handed a pink flyer to those banging on mop buckets and reciting chants such as, “Whose streets? Our streets” and “We’re here and we’re queer!” There were two bright pink middle finger signs held high with the NYPD engraved on the back of the hand as well as two banners that said, “Radical Queers Resist,” and “Stonewall was an un-permitted action.” There was even a mix of bikers chiming bells, applause from diners in outdoor restaurants, and people of all kinds wearing varieties of pink. 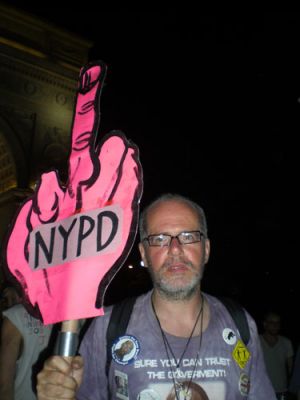 The parade passed right by the Stonewall Inn, the reason a lot of people were marching. Richie Degen, an RHA marcher, said “The regular [pride] parade has nothing to do with the real purpose of what the riots were about, and what Stonewall was about.” The original Stonewall riots protested police brutality and arrests, a message the RHA hopes to continue to promote awareness of today through their parades.

The parade occurred about a week before the 40 anniversary of the Stonewall Riots; something the city’s tourism department spent 1.9 million dollars promoting through their “rainbow pilgrimage campaign.”

In past years, and this year again, City Council Speaker Christine Quinn has come to the forefront of topics the parade organizes against. The group protests Quinn because of the city’s parade permit law deeming that any gathering of more than 50 people requires a permit from the police department.

In 2006, Criminal Court Judge Gerald Harris deemed the law unconstitutional in the case of Critical Mass Biker participants and said the law was “Constituting a burden on free expression that is more than the First Amendment can bear”. However, three years and more than 2,000 arrests later RHA is still protesting the same law that is still an issue today. 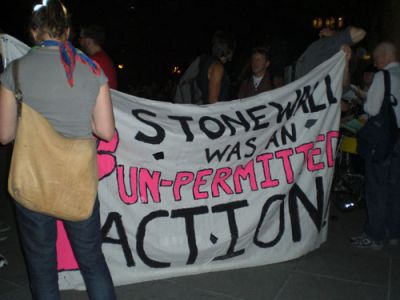 The law gave RHA their name for the annual parade they hold to raise awareness and fight this law. Parade marcher Lalena Garcia is an activist and held RHA’s sign high in response to the law. “The whole idea of having to get a permit in order to exercise one’s first amendment rights really bothers me,” Garcia said.

Long-term RHA member Jessica Rechtschaffer was disappointed with the law as well. “It’s really a failure on the part of the city leadership to preserve basic civil rights,” Rechtschaffer said. Rechtschaffer is passionate about raising awareness and fighting for change in the city and has been since the founding of RHA in 2006.

RHA branched off from the New York Metro Anarchists Alliance as the queer-focused section of the group. The NYMAA was founded in March of 2006 and is affiliated with RHA and the Rock Dove Collective. The organization aims to bring anarchists and anarchist groups together to organize actions.

Andy, one of the original founders of RHA, and Rechtschaffer have come a long way since the first parade, but say they will continue to march until things change. The two, present at the parade today, have been very involved in past parades and planning other actions around the city beyond their annual “parades without permits.”

The first two occurred in 2007 and was met with strong police action. On Friday, police officers were present and noticeable, but did not interfere or interact with marchers. Police officers declined to comment, but seven NYPD officers patrolled the front and back of the parade as well as two cars to help the train of people cross intersections and keep the parade safe and in control.

RHA is also planning an upcoming police coalition according to member Eddie Fukui. Fukui, while toting a pink umbrella to promote visibility, acknowledged that the group presents a wide array of topics, “There’s a ton of issues going on right now… we’re just letting people know there are these issues out there,” said Fukui. 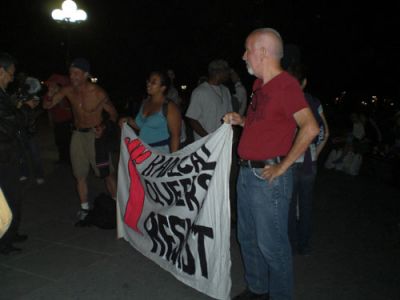 Member Robert Hernandez was adamantly against the parade permit law and Quinn and was born and raised in and has seen the city change for what he feels has been the worst. He is greatly involved in RHA and felt the group accomplishes a lot but still needs to tackle the many issues of a different city, “We’re a social group and we’re small but we are going to get bigger”