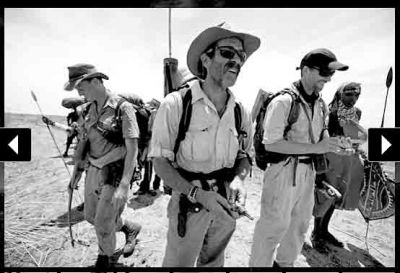 The tropes of the white man as a rugged explorer and Africa as an exotic land that man recovers while recovering himself are now a TV series.

History — formerly known as The History Channel — has just premiered a new reality show, Expedition Africa, which presents these old themes in a new way.

Four enthusiastic and muscled bodies, festooned with dirty khakis and name-brand hiking gear, sail to Tanzania for a long wilderness appreciation trip conceived as a historical expedition. The nature travel is steeped in cultural myths and product placements including Subaru Outback to market a reality show as a type of fantasy.

(The channel is owned by Hearst, General Electric and the Disney Corporation.)

The land the explorers traverse is portrayed in a way that emphasizes heterosexual masculinity pitted against nature. Africa, reason the explorers, is a place to be underestimated at their peril. The lurking camera tracks that sentiment for menacing snakes, insects and signs of infectious disease. The music reinforces the visuals: Everything is full of danger.

But fear of Africa as a place that can kill these people, or at the very least contaminate them, rubs against an Africa equally dramatized as an object of desire. Shots of one lethal reptile after another alternate with aerial glides over vast wilderness areas, ignoring the on-the-ground complexities that might mar the large romantic compositions.

The high points open up Africa’s supposedly mythical naturalness. Endowed with the moral and spiritual symbolism of being named woman (Mother Africa), the territory is engendered as a proving ground, a place that can counter individual imperfections of character and somehow effect deep personal transformations. Overlaid with sentimental music, the nature idolatry reveals that it is not only the explorers who have a love affair with this place; we’re all in a tryst with Momma.

In addition to using simplistic mythologies of femininity and wilderness to represent Africa, the series gives a nod toward history. The explorers’ persistent exertions and close-ups of their flinching faces are supposed to signify they are risking death for television. To give the adventure even more drama the explorers are supposedly tracing David Livingstone’s efforts to map the natural resources of the region in the 1860s for the United Kingdom and journalist Henry Morton Stanley’s march to find him.

Resurrecting these historic figures and following their 19th century route, Expedition Africa is unapologetically presenting its story as a progressive march of human nature. This style of representation assumes “natural” and “human” laws are a given, which, in turn, order colonial domination and an aesthetics of survival based on biology.

But continuity is more accurately navigated through the ongoing investment in the image of commerce as a humanitarian impulse and the unpacking of genes to naturalize and individualize what actually serves a much larger structure of power.