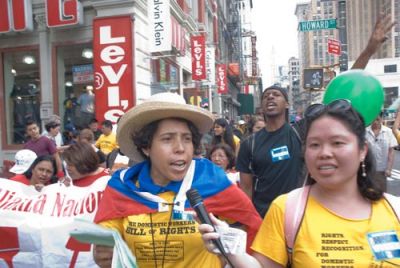 The uncertain power-sharing agreement between Democrats and Republicans in the New York State Senate could jeopardize the passage of the Domestic Workers Bill of Rights, which is designed to improve working conditions for some 200,000 domestic workers in New York.

The bill would ensure overtime pay, advance notice of termination, annual cost of living increases, healthcare and protection against discrimination, as well as paid sick days, personal days and vacation days. Domestic workers are not protected by the National Labor Relations Act or similar labor legislation. Domestic Workers United (DWU) has been a leader in this five-year campaign.

Recent DWU events in New York City include a 24-hour vigil for the Domestic Workers Bill of Rights June 12 and a children and families march for domestic workers’ rights June 14. The bill (A1470/S2311) has been approved by the Assembly and Senate Labor Committees and is waiting to be debated on the floors of both chambers.

The June 8 coup in the State Senate, in which two Democrats — Sens. Pedro Espada (Bronx) and Hiram Monserrate (Queens)— switched parties, enabled the Republicans to claim control, hindering progress on this and other legislative issues.

Since then, Monserrate has switched back to the Democratic Party, leaving the Senate split 31-31. Both Monserrate and Espada are co-sponsors of the Domestic Workers Bill of Rights. While some Republican senators support the bill, as The Indypendent went to press the ambiguous Senate leadership was continuing to postpone discussion of the bill.