Since the late 19th century, Iranians have repeatedly rebelled against tyranny at home and domination from abroad.

Thirty years ago, the cries of “Allah-u-Akbar!” often filled the air in the capitol city of Tehran as the Iranian Revolution gained momentum amid strikes and mass street protests. The uprising would ultimately sweep the U.S.-backed Shah out of power and establish an Islamic Republic. Now, the same cry of “God is great!” can be heard nightly from Tehran’s rooftops as millions of Iranians push back against their rulers following a contested presidential election and a searing week of protests in June that left at least 17 dead and hundreds injured at the hands of government police and paramilitaries.

While it is impossible to say for certain who won the June 12 election, there is currently both a freedom movement from below and a power struggle from above pitting fundamentalist theocrats against elite business interests that want to reintegrate Iran into the global economy. With the Iranian uprising rapidly unfolding on YouTube videos and Twitter feeds of uncertain origins, anything from a continued smothering of dissent to a general strike to a bloody crackdown seems possible. 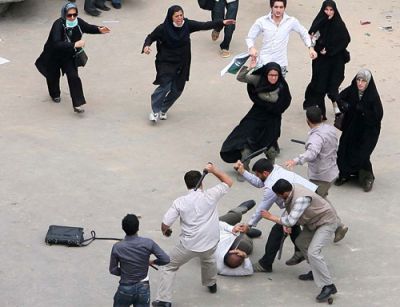 Formed shortly after the 1979 revolution that overthrew the Shah, the Islamic Republic permits popular participation while guaranteeing clerical rule. Conservative traditionalists and liberalizing reformers vie for the presidency and parliament in regular elections, but an unelected Council of Guardians screens candidates for office and can veto any law passed by parliament that it deems inappropriate. At the top of the Iranian system sits the Supreme Leader who controls the security forces and whose pronouncements are supposed to be the final word in matters of state.

Under the doctrine of Vilayet-e Faqih (“Rule of the Just Jurisprudent”), the Supreme Leader is supposed to be a pious and fair-minded guardian of a society governed by Islamic law. Ayatollah Ali Khamenei was chosen as Supreme Leader by an 86-man Assembly of Experts following the 1989 death of Ayatollah Ruhollah Khomeini, the Islamic Republic’s founder. Composed entirely of Islamic scholars, the Assembly of Experts can dismiss the Supreme Leader if a majority of its members decide he is no longer suited for the job.

Iranian politics have been dominated for three decades by the leaders who came to power in the 1979 revolution. Here are five figures to watch:

Khamenei served as President of Iran during much of the 1980s. He was chosen over other more senior clerics by Ayatollah Khomeini to be his successor shortly before Khomeini died in 1989, a source of resentment for some in Iran’s religious establishment. Known as a deft political operator who has been able to balance Iran’s competing power centers, Khamenei is believed to have especially strong ties to the Revolutionary Guards and other security forces. As Supreme Leader, Khamenei has the final say in all affairs of state, but the day-to-day management of the country is left to the president and his ministers.

Reviled by critics as a populist demagogue, Ahmadinejad has built a substantial following among Iran’s poor and rural inhabitants with a combination of nationalism, religiosity, personal austerity and a variety of economic subsidies. Ahmadinejad is a strong proponent of Iran’s nuclear program and has drawn criticism in the West for questioning the Holocaust and for his verbal attacks on Israel. Speaking at Columbia University in Sept. 2007, Ahmadinejad denied there were any gays in Iran. Ahmadinejad was first elected president in 2005 and according to official results, was re-elected with 63 percent of the vote.

Mousavi emerged from two decades in political retirement this spring to challenge Ahmadinejad for Iran’s presidency. As the candidate of “change,” Mousavi vowed to speed up the privatization of state-owned businesses and end Iran’s international isolation. Mousavi attracted passionate support from women and young people who have chafed under the Islamic Republic’s repressive social mores.

An architect by training, Mousavi was Iran’s Prime Minister from 1981 until the position was abolished in 1989. As Prime Minister, Mousavi guided Iran’s economy through the war with Iraq from 1980 to 1988. Thousands of political prisoners, many of them leftists, were executed by the Iranian government during Mousavi’s time in office. Mousavi was a rival of Khamenei during the 1980s and withdrew from politics after Khamenei became Supreme Leader.

A strong supporter of Mousavi, and son of a pistachio farmer, this billionaire cleric is a leading voice for business interests who want to end Iran’s international isolation and scrap Ahmadinejad’s populist economic policies. He also heads the 86-man Assembly of Experts, the only body in Iran that has the power to replace the Supreme Leader. Rafsanjani is perceived by many Iranians as having enriched himself and his family during his two terms as president from 1989 to 1997. Rafsanjani was trounced when he ran for the presidency against Ahmadinejad in 2005. Among his many holdings, Rafsanjani controls Iran’s largest private university system, which has 1.3 million students and played a key role in mobilizing support for Mousavi’s campaign.

When Montazeri announced June 16 that, “no one in their right mind can believe” in the official election results, protesters gained the support of one of Iran’s most revered religious leaders. Architect of the Islamic Republic’s constitution, Montazeri, 87, was the designated heir to Ayatollah Khomeini until he angered Khomeini with criticisms of Iran’s human rights abuses. Ayatollah Ali Khamenei was subsequently selected as the Supreme Leader. A prolific writer, Montazeri has advocated greater democratic freedoms and rights for women. He was under house arrest from 1997 to 2003.

When anti-government protests broke out in Iran, supporters of the regime immediately fingered the United States and Britain as culprits based on a long history of Anglo-American intervention.

1890-1892 Unpopular concessions on tobacco and other products to the British lead prominent Shi’ite clerics to call for nationalist protests and a nationwide tobacco strike, which succeed in forcing the canceling of the concession.

1908 The Anglo-Iranian Oil Company is founded when the British discover massive oil reserves in what is now southwestern Iran. Iran initially receives only 16 percent of the profits.

1953 Iran’s democratically elected Prime Minister Mohammed Mossadegh is deposed in a coup jointly orchestrated by the CIA and British intelligence. Mohammad Reza Pahlavi is restored as Iran’s absolute ruler, or Shah. Mossadegh had angered British and U.S. oil interests by nationalizing Iran’s oil reserves the previous year. The Shah becomes a key U.S. ally in the Middle East. During his reign, tens of thousands of dissidents are killed and tortured by the SAVAK secret police which was trained, and equipped, by the United States.

1978-1979 Massive street protests force the Shah from power in one of the great revolutionary upheavals of the 20th century. Ayatollah Ruhollah Khomeini returns from exile to establish an Islamic Republic in which religious law guides all aspects of public and private life.

1979-1981 Iranian students seize the U.S. embassy in Tehran and take 52 American hostages. The 444-day hostage crisis sparks an outpouring of anti-Iranian rage in the United States, but is wildly popular in Iran. A treasure trove of documents recovered in the embassy reveal extensive, longstanding ties between the SAVAK and the CIA.

1988 A U.S. warship shoots down an unarmed Iranian passenger airliner over the Persian Gulf, killing all 290 people on board. The Iran-Iraq War ends in a stalemate. At least 500,000 people are killed in the war. Both countries are weakened and left heavily in debt.

2003-2008 Fears of a U.S. military attack grow in Iran after President George W. Bush lumps Iran into the “Axis of Evil” with Iraq and North Korea and then invades and occupies Iraq with 140,000 troops. Iran continues development of its nuclear energy program much to the dismay of the United States and Israel. A July 2008 report by investigative journalist Seymour Hersh reveals that the Bush administration has authorized spending as much as $400 million on covert operations in Iran.
—J. T.