The Islamist: Why I Became an Islamic Fundamentalist, What I Saw Inside, and Why I Left
By Ed Husain
Penguin Books, 2009

When Ed Husain’s The Islamist first appeared in British bookstores in 2007, fundamentalist Muslims condemned their former comrade-turned-critic, calling him a traitor. This is not surprising, since Husain presents the groups he was involved with, including the Young Muslim Organization (YMO) and Hizb ut-Tahrir, in less than flattering terms.

At the same time, Husain has resisted becoming the darling of the Right. He is openly critical of Israel and Israeli Foreign Minister Avigdor Leiberman and has criticized Western imperialism, the Iraq War and the push for more troops in Afghanistan. As the founder of the Quilliam Foundation, a year-old think tank named for the man who opened Britain’s first mosque in 1889, he hopes to unite those who oppose religious violence and extremism.

The Islamist is part memoir, part political tract and part explication of Islam. It begins in 1975, with Husain’s birth into a middle-class London family. His immigrant parents were largely assimilated, maintaining their faith while simultaneously participating in civic life. Husain was sent to a public elementary school where he recalls being treated fairly. By junior high, however, gangs had become prominent and Husain switched schools; his education now included exposure to religion teachers pushing “the establishment of Allah’s law in Allah’s land.”

Husain found this concept thrilling. For one, it enraged his parents. For another, it allowed him to plug into a ready-made community, something all teenagers crave. Within months, he joined the Young Muslim Organization and began to learn about community organizing, from leafleting to public speaking. He was a natural — charismatic, devoted and passionate.

While his studies suffered, he didn’t care, and he became an outspoken promoter of political Islam. By age 16 his entire social circle was Islamist, convinced that Islam trumped other faiths. “Partial Muslims,” like his parents, were continually derided. 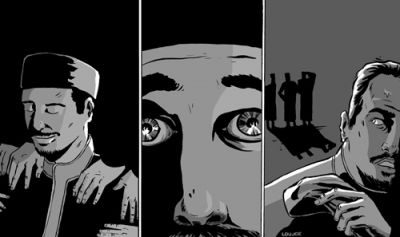 He began reading fundamentalists like Syed Qutb and by the time he enrolled in Tower Hamlets College was calling Islam “the final solution,” oblivious to the phrase’s Nazi origins. He encouraged other students to practice “true Islam,” publicly berating women who failed to dress modestly. “Like me,” he writes, “most of the students at college had no real bond with mainstream Britain … Islamism provided us with a purpose and a place in life.”

By the mid-1990s, splits in YMO catapulted Husain into Hizb ut-Tahrir, a group led by Omar Bakri. Bakri spoke about the murder of Bosnians and hyped Husain up on the idea of uniting Muslim armies under a single state, the caliphate. Democracy, Bakri told Husain, was haram, forbidden, because it was human-crafted. “Only Allah can rule,” Bakri counseled.

Jihad, the caliphate, Sharia Law — indeed, Bakri’s entire oppositional stance — captivated Husain. Then, reality bit. A fight between a Hizb member and someone considered a “Christian nigger” ended with the latter’s death. The murder shook Husain. “I felt unremitting guilt,” he explains, suddenly understanding attacks on “infidels” as the logical outcome of Hizb philosophy.

As he slowly extricated himself from the group, he became immersed in classical Islam and was shaken even further. The Prophet Mohammed’s words, “Beware of extremism in religion; for it was extremism in religion that destroyed those who went before you,” haunted him and prompted him to study further. Coupled with 9/11 and the 2005 London subway bombings, this study eventually led Husain to recant his former ideology and get funding for Quilliam.

Husain’s analysis and personal example deserve a fair hearing both within and outside the Muslim community. His non-literal interpretation of scripture, his belief in women’s equality, and his rejection of violence are wise responses to Islamist extremism. While I disagree with his push to ban the YMO and the Hizb — a position more likely to increase their appeal than stifle it — The Islamist is both fascinating and instructive.