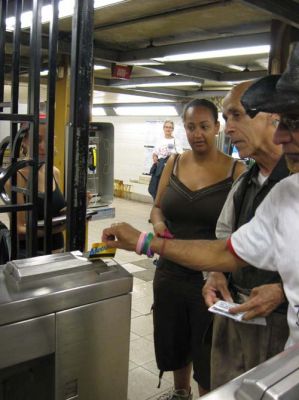 It’s not often that anyone gets a free ride during a recession, but throughout the city, a growing program is giving out more than 600 subway MetroCard swipes each month.

“The idea is that we can’t just be silent, we can’t sit back,” said East Harlem community activist Jacob Rosette. “We need to organize in our communities.”

In response to the economic recession and the Metropolitan Transportation Authority’s (MTA) fare hikes, community activists across the city are organizing the People’s Transportation Program (PTP), days where the goal is to swipe as many people through the turnstiles as possible with several daily unlimited MetroCards. Every third Saturday of the month, train riders in the Bronx, East Harlem, Queens and Brooklyn may walk into subway stations to find someone willing to pay their way.

“Regardless of what the MTA does, we’re trying to look out for ourselves and advance our own needs and our own interests,” Rosette said. Rosette estimated that he and other East Harlem activists swiped in up to 300 people May 30 in only three hours at the 116th Street and Lexington Avenue subway station.

Perhaps, surprisingly, the People’s Transportation Program is not breaking the law. Individuals are free to share unlimited MetroCards, although they must wait 18 minutes between swipes for the card to reactivate.

“As long as they’re not charging people [for swipes], we can’t stop them from buying the cards and providing the service free to the people,” MTA spokesperson Paul Fleuranges told The Indypendent.

Gene Russianoff, director of the New York Public Interest Research Group’s Straphangers Campaign, said that roughly half of the revenue for the $6 billion annual budget for the city’s transit system comes from user fares alone. Russianoff, however, said it would take a lot of MetroCard sharing to make a dent in the revenue.

“Even if you got 50,000 people to do the boycott or join the protest movement, it would go largely unnoticed because you have millions of people who are using the system,” Russianoff said. The MTA estimates that the system handles 7.5 million rides daily from 3.5 million commuters.

The activists say their inspiration is based on models of autonomous community organizing created by the Black Panther Party more than 40 years ago. The Black Panthers developed community “survival programs” that provided aid to neighborhoods in need.

“We get a few artists or poets together to sort of donate their time and talent to raise funds for the PTP,” said Javier Genao of Sunset Park, Brooklyn. “We tell the audience what we’re doing and why we’re doing it and collect donations.”

Members of the Sunset Park Alliance of Neighbors organized a local PTP group. Sunset Park resident Lida Shao explained that it typically costs their group $75 each Saturday they head into the subway, money that is raised through grassroots efforts. On June 20, the group swiped in approximately 200 people at the 36th Street subway station in Sunset Park.

“I think people are really suffering,” said Bay Ridge resident Barbara Reish June 20 before she was swiped in for free at the subway station in Sunset Park. “For a lot of people, the subway fare just getting to work or around town is a hardship. And to have the means for people to get a free ride, it’s fabulous.”

The activists say they get to talk to subway riders as they wait for the card to reactivate for a free swipe. “It’s just a cool moment when everyone’s lives combine,” Shao said.

Rosette and Gerardo said they posted a video on YouTube to promote the PTP concept throughout New York City. The PTP hopes to expand the effort in the future in order to serve every community. Eventually, they hope their campaign will inspire change within the MTA.

“I think the viable option we need most is the transit fare sustained at an affordable level,” said Wiley Norvell, communications director for Transportation Alternatives.

Gerardo and Rosette say they are focused on creating societal change and instilling a culture of people helping people — without waiting for the government or the MTA to assist them. “We’re not doing this for ourselves,” Rosette said. “We see this as a small step toward the society that we want to live in.”

In the wake of the MTA fare increase June 28, all PTP groups are organizing a day of protest and action where they hope to sign up more people to help swipe in commuters for free.

“The politicians have forgotten that thepeople are the main ingredient. Without us there would be no corporations or politicians or MTA,” Gerardo said. “They need to understand that we run things, the community, the people on this earth, we run things.”

For more MTA coverage in The Indypendent, see “Why the MTA Is Broken” and “Getting the MTA Back on Track” by Danny Valdes.