Maria Byck, a staffer at the media collective Paper Tiger TV, sits in a cluttered office surrounded by computers, videos, and social justice posters, explaining what 339 Lafayette St. means to her.

“The building is an amazing gift to the social justice movement. To me, the building represents potential, the potential to really create a community that reaches out and brings people in, and inspires people and educates people,” Byck says. “[People here] have done incredible work that has influenced the world.”

Being able to pay below-market rates in the aging three-story, 9,000-square-foot building has allowed Paper Tiger TV to survive in the high-end NoHo district in Manhattan. The A.J. Muste Institute, named after legendary pacifist and labor activist Abraham Johannes Muste, is the owner of what has come to be known as the “Peace Pentagon.” Besides Paper Tiger, the building’s tenants include the War Resisters League, Metropolitan Council on Housing, the Socialist Party, Deep Dish TV, the Nicaragua Solidarity Network and the Libertarian Book Club.

However, the Peace Pentagon’s owners and tenants have reached a critical crossroads since the 2007 discovery that the building has major structural problems including a sagging support column that could require costly repairs or force them to sell the building and look for a new home.

“You have all kinds of shifts and changes that occur in an old building, and they have come home to roost,” said David McReynolds, a 79-year-old peace activist who sits on the Muste Institute’s board. 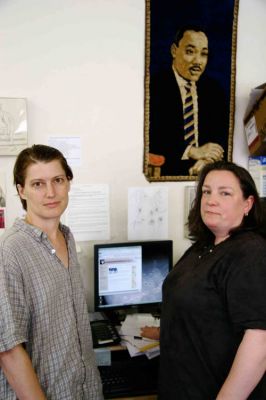 The Muste Institute’s board originally favored selling its slice of NoHo real estate for millions and using the proceeds to find a new home for it and its tenants but has since commissioned a comprehensive structural survey that will cost at least $75,000.

“The decision [to sell was] made too hastily,” says Steve Ault, a member of Friends of 339, a group that has pushed the Muste Institute to reconsider selling the building. Ault says that staying in the building would be a “superior option” if its problems could be identified and fixed at a reasonable cost.

In the past, according to the Muste Institute’s Co-Director Jane Guskin, estimates for the cost of repairs have run between $1 million and $5 million, but the current survey will provide a more accurate price tag.

One option the Friends of 339 group favors is borrowing money to make the necessary repairs.

Another option would be a fundraising campaign to make the repairs, although it’s unlikely that effort would come close to raising enough money to cover the costs. Murray Rosenblith, former executive director of the A.J. Muste Institute, told The Indypendent last year. “It would be a real stress for us to raise $2 million.” If the repair option wins out, it’s possible that the building would have to be emptied, displacing current tenants for a time.

“To be displaced for a while would be difficult, but I think that it’s doable. It’s totally worth it in the long-term goal of keeping this space,” said Paper Tiger TV’s Byck, who is also a part of Friends of 339. Even as the board is waiting on the completion of the survey to make a final decision, the building was listed on the market in mid-May with two brokerage firms, one to look at lease offers for the ground floor retail space and another to look at selling the whole building.

According to the New York City Department of Finance website, 339 Lafayette’s assessed value is $1.48 million (down from $3.51 million in the 2007-2008 tax year). But its actual sale value could be far greater, given its corner location in NoHo directly above a 6 train subway stop.

Peter Muste, the grandson of A.J. Muste and the current chair of the institute’s board, said that at this point, he is not leaning toward selling or repairing, but wants any decision to take into account the institute’s long-term future.

“I am also concerned that we not take financial risks that could put the institute or its programs in jeopardy,” Muste said. “At this time, none of the options has a clear advantage [and] that’s why we’re exploring them all thoroughly.”