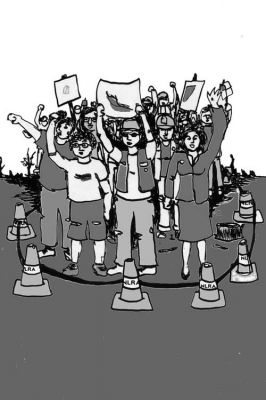 Labor Law For The Rank And Filer: Building Solidarity While Staying Clear Of The Law
By Staughton Lynd and Daniel Gross
PM Press, Reissued 2008

The popular wisdom on the Left and in the labor movement is that the National Labor Relations Act (NLRA), passed in 1935, was a great boon for workers. The passage of the NLRA, or Wagner Act, with its provisions that made it legal to organize, join unions, bargain collectively and strike, is commonly portrayed as a huge victory that workers and unions unanimously supported. The true story of this law, however, is more complex.

The Industrial Workers of the World (IWW), the Communist Party, the American Civil Liberties Union and other organizations opposed the NLRA, as did prominent labor radicals like A.J. Muste. More important, so did many rank-and-file workers. They were concerned the NLRA was that it would curtail many of the initiatives of the rank and file, and that it constituted government ratification of a status quo heavily weighted toward business. To a large extent, what they foretold has come to pass.

In a new, expanded edition of Labor Law For the Rank and Filer: Building Solidarity While Staying Clear of the Law, Staughton Lynd and Daniel Gross examine the NLRA and other major laws that impact workers: how and why they came into being, the ways they’ve been interpreted (and often misinterpreted), and how laws with positive aspects like the NLRA are actually double-edged.

The authors don’t pit working class activity and the law against one another, but rather suggest how workers can utilize the law to supplement the former. In doing so, they point to important ways that workers can take the lead in re-building a real movement.

Given the dead end at which the union part of the labor movement currently finds itself, the re-issue of Labor Law For the Rank and Filer is especially timely. Whole forests of trees have given their lives to the creation of books and papers about labor’s crisis, yet working class self-activity barely registers in the discussion. We cannot expect labor executives and their allies to lead the charge to, say, eliminate no-strike clauses when they’re as hostile to wildcat work stoppages as any boss.

It is precisely around this kind of issue that rank and filers need to strategize, and it is to discussions of these issues that Lynd and Gross contribute so much. Activist, attorney and historian Lynd has been telling the rank-and-filer’s story and explicating “from the bottom up” strategies for many years. He authored the first edition of Labor Law For The Rank and Filer in 1978, which was printed by Singlejack Books, a small publishing house founded by longshore workers Stan Weir and Robert Miles. The book’s publication cost Lynd his job at a prominent Ohio law firm that represented unions. Gross, a member of the IWW, plays a prominent role in the Starbucks Workers Campaign and founded Brandworkers International.

The new edition contains extensive discussion of solidarity unionism, a form of labor organizing in which workers, whether members of a union or not, do their own strategizing. The authors present many scenarios in which workers, rather than consulting a lawyer, can legally resist employers. They also cite actions that can be taken by workers, when necessary, without the consent of the union.

The recent occupation of the Republic Windows and Doors plant in Chicago by members of the United Electrical, Radio and Machine Workers of America is a powerful reminder of another point Lynd and Gross make: workers can push the limits of the law and win. Occupying a factory has been illegal for 70 years, yet none of the Republic workers was arrested, let alone prosecuted. The key is sticking together and winning the support of the local community.

Another story that Lynd and Gross tell is of organizing efforts in workplaces where no majority or exclusive representative exists. The goal is not to collect membership cards and affiliate with a national union, but to stand together to better control the terms of work. As a member of one such organization says, “There is no point on which we cannot enforce concessions and some sort of de facto bargaining if we are strong enough.”

This is the spirit that runs through Labor Law For the Rank and Filer, and it is the spirit that can galvanize a new working class movement. There is rich history for us to mine and many currents surging below the surface, largely out of sight, but capable of bursting forth at any time. Like good organizers, Lynd and Gross present insights that are extremely valuable for both the short-term and the long run.