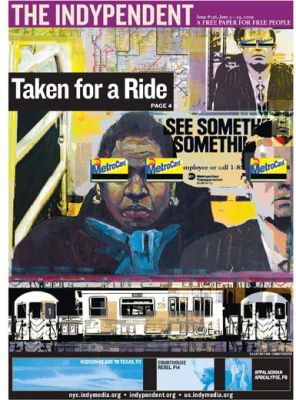 CONTAMINANTS FOR RICH OR POOR?
In response to “Hudson Contaminates Go to Texas,” June 5:

I often have the feeling the big corporations just stall and stall, hoping everyone in the contemporary battle will die out and the younger not know, or wait until new judges or politicians come into office or court. What about breathing the dust from the landfill? Why do I think it’s nearer the poor folks than the rich?
—Sanda

MORE QUESTIONS, FEWER ANSWERS:
In response to “Sri Lanka’s Bloody Conflicts Not Over Yet,” June 5:

Now that the LTTE rebels have been completely wiped out (according to the Sri Lankan government) why are they still not allowing independent Aid organizations and the media?
—Eezha Thamizhan

DEBATING WBAI
In response to “WBAI bounces back,” June 5:

As you can tell from the ugliness of some of the comments to this fine article it’s been a long grim rides these nearly pat 10 years. I think the problem at heart was that some within the station sincerely felt that WBAI belonged to them. That or, at least, they were charged with safe-guarding it for those that believed in a particular racial ideology. This is how one group of blacks, can call another racists or as above “house negros.” The WBAI faction wars have been a long sad experience for the listeners, volunteers and staff. I hope it is, at last, over.
—Sidney Smith, WBAI host

NO MORE BULLIES
In response to “School Bullying Is Not Child’s Play,” May 15:

I completely agree that the bill regarding the Safe School Improvement Act should be passed. After reading this article I cannot imagine what the parents and family members of this family went through/are going through. It does not matter whether or not these boys were gay, bisexual, or transgendered, the fact that they were not safe or feeling safe at school is a major problem that those schools need to deal with.
—Courtney

PLAYTIME IS OVER
In response to “WBAI Bounces Back,” June 5:

WBAI has not been relevant for about 30 years. Tune it in on any given day and the programming doesn’t sound any different from what the station was doing back in the Margot Adler, Pepsi Charles, Bob Fass, James Irsay days. Only differences are the current personalities are cosmic dumb and the producers are watered-down losers. No wonder so few people have been supporters in the past decade. You’d think that during the Bush debacle and in its wake, that station would have plenty of gist to bring in significant listener numbers. The station hasn’t operated in the public interest to any significant extent for a generation, so Pacifica should sell it off to commercial interests and end the charade already.
—laszloseverance

JUST SAY NO.
In response to “Why the MTA Is Broken,” June 5:

The “industry standard” you cite is for small market transit systems with weak unions. And it’s a truly awful “industry standard” — like the unpaid swing shift where workers work 12 hours but only get paid for 8! And the proposal to eliminate live station agents who can help people perform a transaction with rent-a-cops who can’t help you if you need change for the MetroCard vending machine is just ridiculous.
—Gregory A. Butler

WHY NOT MOVE?
In response to “Peace Pentagon Faces Uncertain Future,” June 5:

Sell the building and buy a larger, nicer building at a convenient location in Brooklyn. This would enable the A.J. Muste Institute to purchase a superior facility with the proceeds of a sale in any market, the current building has no real advantages, and — most important — there is no other way forward.
—Joe C