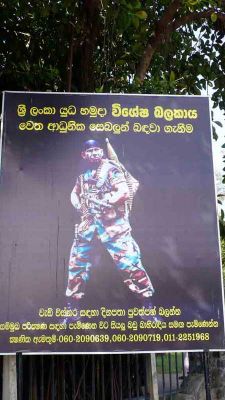 Following the defeat of the Liberation Tigers of Tamil Eelam (LTTE) in May, Sri Lanka’s President Mahinda Rajapaksa claimed that his government had not spilled a drop of civilian blood in the process. Yet, notwithstanding the end of combat operations, Colombo continued to prevent international aid agencies and media from visiting the region where the final act of an uncommonly bloody drama unfolded.

The government’s claim to have rescued civilians from the clutches of the Tigers is at odds with the suspicion it seemingly continues to view all Tamils. Rajapaksa turned down an appeal from U.N. Secretary General Ban Ki-moon to allow access to camps where hundreds of thousands of Tamil civilians are believed to have been corralled, ostensibly to weed out members of the LTTE.

Despite the rebuff, Ban complimented the Sri Lankan government on its humanitarian role after visiting one of the internment camps, and the U.N. human rights council has welcomed triumph against the Tigers without uttering a word about civilian casualties. A report by the Times of London claims that “at least 20,000 Tamil civilians were killed in the Sri Lankan Government’s final offensive.”

Without conciliatory moves by Colombo, it is perfectly possible that the past year’s events — and particularly those of recent months — will breed yet another generation of embittered Tamils, some of whom may well be inclined to emulate the Tigers.

The authorities may have succeeded in tackling a major symptom of the affliction, but thus far there has been no evidence of a determination to address its underlying causes. Rajapaksa may assume he has disproved all the analysts who argued that the Tamil issue could not be resolved exclusively through military means. In fact, they are almost certain to be proven right if Colombo chooses to do little more than bask in the glow of its achievement on the battlefield.

The sensible alternative would be to immediately launch a political initiative to address legitimate Tamil grievances and redressing long-standing woes, with the aim of turning the lush subtropical island into a nation where multiple religions and languages can thrive side by side.

The history of the war is generally traced back to 1983, when the Tigers took up arms in the wake of anti-Tamil pogroms by Sinhalese extremists. The conflict’s origins between the Sinhalese majority and the Tamil minority are rooted in the colonial era, however. The British, as was their wont, relied on a divide-and-rule policy to facilitate their governance. In the case of Ceylon, as the island was known until 1972, this involved privileging the more educated Tamils, thereby breeding resentment among the Sinhalese.

The lineage of Ceylonese Tamils stretches back at least to the 10th century. Their numbers swelled in the 19th and 20th centuries with Indian Tamils who were encouraged by the British to cross the Palk Strait and labor on tea, coffee and rubber plantations. The two groups of Tamils did not have much to do with each other until they decided to unite causes in the 1980s.

Following Ceylon’s independence in 1948, the majority sought to correct the pro-Tamil colonial imbalance and, as often happens, went too far. Many Indian Tamils were repatriated to India, and many of those who remained were denied Sri Lankan citizenship for decades. In the 1950s, an effort to institute Sinhala as the official language, in place of English, was intended to exclude Tamils from government posts. It led to riots and spawned Tamil demands for autonomy and independence that remain unfulfilled more than half a century and some 100,000 dead later.

Unlike its ostensible cause, the LTTE’s methods were indefensible. I say ostensible because dedicated purveyors of violence often fall prey to a dynamic whereby the use of force becomes an end in itself. And the LTTE’s repertoire, in this context, was extensive. The Tigers pioneered the gruesome art of suicide bombing, were adept at the use of gunboats and even managed the occasional air raid. Their random acts of terror included bomb blasts on public transportation or in the marketplace, where the primary victims were Sri Lankan civilians.

The best-known victims of the LTTE’s high-profile assassinations were Sri Lankan President Ranasinghe Premadasa and former Indian Prime Minister Rajiv Gandhi. India was allegedly an early sponsor of the Tigers, but Gandhi was targeted because he dispatched to the island an Indian peacekeeping force that became embroiled in combat with the LTTE, with disastrous results.

The LTTE’s tactics undoubtedly damaged the Tamil cause. But then, the question of employing them may never have arisen except for the obduracy of the Sinhalese-dominated state. A meaningful degree of autonomy and effective anti-discrimination legislation would have sufficed, at more or less any stage of Sri Lankan history, to assuage Tamil woes.

Negotiations mediated by Norway floundered time and again, and although that track has now been rendered superfluous, Colombo could still do a world of good by initiating a process of devolution whereby Tamil aspirations could be satisfied. But that appears unlikely given the security state that has evolved in recent decades, with the ruling powers reluctant to brook criticism or dissent. Top Tiger Vellupilai Prabhakaran, who was killed last month, was often accused of being a mini-führer, but the gunslingers in Colombo were invariably willing to match him.

Sinhalese chauvinism has been bolstered in recent years with support from China and Pakistan. The Rajapaksa brothers — including Defense Secretary Gotabaya and political adviser Basil — initially sought to replenish their armories with India’s assistance. Although New Delhi was sympathetic, it could ill afford to antagonize its own Tamil population. Colombo was thereafter able to solicit help from rival Asian powers without annoying India. It is unlikely that Beijing and Islamabad have secured any long-term strategic advantage in the bargain, and they are also unlikely to push Colombo to be conciliatory.

But if Mahinda Rajapaksa and his siblings refuse to remedy past injustices and bury decades of disaffection, chances are that history will view their moment of triumph as a Pyrrhic victory.

Mahir Ali is a Pakistani-born journalist based in Australia.