The battle for justice for the more than half-million peaceful protesters of the August 2004 Republican National Convention continues with Mayor Bloomberg’s Law Department doing everything it can to delay the day of reckoning.

Five years after activists were illegally spied upon, swept up in mass arrests and held in toxic conditions in a dirty bus barn, the New York Civil Liberties Union and National Lawyers Guild are still fighting to get the full picture of the City’s conspiracy to disrupt lawful protest.

More than 50 lawsuits challenging the deprivation of civil liberties are still pending, although 87 protestors have accepted settlements. Of the 1,806 people arrested during the week of the RNC, 90 percent had their charges dropped.

How is the City managing to delay being possibly found liable for damages? Under federal rules of civil procedure, a federal magistrate, not a full lifetime-tenure judge, makes rulings on garden-variety discovery disputes. These decisions have the full force of law, and recourse to a federal judge is available under Rule 72 only if the magistrate’s decision is demonstrated to be “clearly erroneous or contrary to law.”

So rather than comply with magistrate orders to turn over secret NYPD documents and allow questioning of police officials about their policies in July and August 2004, the City continues to invoke Rule 72. Since the civil rights suits were filed in 2005, the city has invoked Rule 72 at least 10 times. Each time the rule is invoked, it causes delay, sometimes for as much as a year. 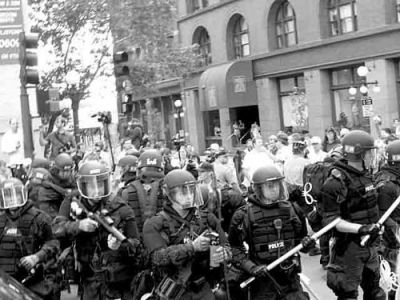 IN HINDSIGHT: NYPD policies for the 2004 Republican National Convention have led to more than
50 court battles over violations of civil liberties. PHOTO: INDYMEDIA.ORG

Interestingly, in March 2007, while these court battles were raging, someone leaked hundreds of documents marked “NYPD Secret” to the press. The documents detailed how undercover agents were sent to at least 15 places outside New York City 18 months before the RNC for the purpose of spying on activists and identifying “potential terrorists.”

The City blamed the civil rights lawyers for the leak. As a result, the deposition of David Cohen, NYPD deputy commissioner for intelligence, came to a halt. His transcript was sealed, and much of it is still under embargo. Ultimately, the city’s lawyers backed down and admitted they did not know who leaked the documents. The City is still resisting further disclosure.

Cohen, a former senior official in the CIA’s clandestine services department, was hired in 2002 by NYPD Commissioner Ray Kelly to build a CIA-style intelligence department within the NYPD, which is detailed in Christopher Dickey’s 2009 book, Securing the City.

Plaintiffs’ lawyers contend Cohen “formulated policy through the presentation of distorted intelligence data that culminated in the formulation and adoption of the nosummons and blanket fingerprinting policies,” and therefore he should be added as a defendant to the civil rights suits. On Jan. 23, 2008, magistrate Judge James C. Francis granted this request, finding that Cohen “holds a high rank in the NYPD and was therefore in a position to understand and influence policy-making for the RNC.” The Magistrate went further, writing, “The record indicates that Commissioner Cohen initiated the RNC surveillance program.”

The City did not get the hint, moving to reargue rather than letting the case move toward trial. It got its day in court May 6 when a clearly annoyed Judge Sullivan told the City, “You’ve presented nothing new. These are arguments you’ve already made. You’re trying for a third swing at the bat … I find your tone frankly insulting.”

One can only speculate why the City is fighting so hard to keep Cohen from being added as a defendant and being forced to testify. As of September 2008, the city had spent $6.6 million just on lawyer’s fees.

Jeffrey Rothman, attorney for several of the plaintiffs, said that he believes the City is dragging its feet in part to avoid damage to the mayor during his re-election campaign or to his political heir-apparent, Ray Kelly.

“It is our hope this litigation will achieve accountability for the NYPD’s illegal, dishonest and oppressive practices during the RNC,” Rothman said, and “will help to prevent similar abuses by the NYPD in the future.”