TEXT BY SARAH SECUNDA AND PHOTOS BY JOEL COOK 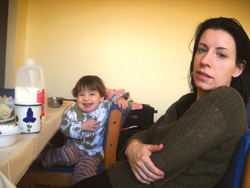 A DAY IN THE LIFE

Franceska Dillella is a working mother with three kids: six-year- old Zach, four-year-old Nick and two-year-old Eden. For eight months, she struggled to keep her family together while contending with the city’s homeless shelter system. Here is an example of a typical day: 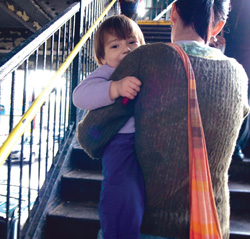 6:00a.m.
At the Stockholm Family Residence in Bushwick, Brooklyn, Franceska wakes up the kids, gets them dressed and fixes breakfast. 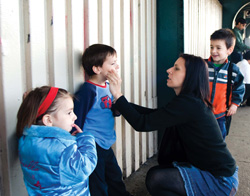 PATIENCE: The family waits at the Central Avenue subway station in Bushwick for the M train.

7:30a.m.
Franceska and her children head out the door to catch the M train from Central Avenue to Essex Street, where they switch to the F train. They take the F train one stop to Second Avenue and transfer to the V train. The family disembarks at the Steinway Street station in Astoria, Queens, and walks to Zach’s elementary school.

8:30a.m.
The school day starts. Zach is often late for first grade because of the long commute, which can take up to two hours. 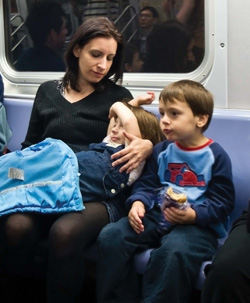 MADONNA AND CHILD: “It’s not easy for anyone to say they are homeless,” Franceska says, “especially children.”

9:00a.m.
After dropping off Zach, Franceska takes Nick to his pre-kindergarten school nearby, which also provides day care for Eden.

9:30a.m.
Franceska gets on the N train to travel to her job in Manhattan’s Lower East Side.

10:00a.m.-4:30p.m.
Franceska works, but often has to attend mandatory meetings at the office of the Human Resources Administration located in Sunnyside, Queens, where she has waited up to four hours to meet with a case worker.

4:30p.m.
Franceska heads back to Astoria to pick up the kids, who get out of after-school day care at 5:30 p.m. The family then makes the long commute back to the shelter. 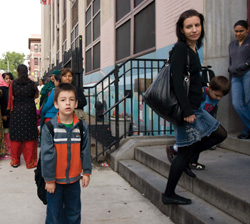 TIME FOR CLASS: Zach arrives at his elementary school in Astoria. He has missed a number of school days this year due to poor health.

8:00p.m.
Franceska often goes to a friend’s house to use the Internet for her job. The shelter has no computer and the public library closes at 6 p.m.

A record number of families are flooding New York City’s emergency homeless shelters. In February 2009, there were more than 9,600 families in the city’s shelter system, the highest number since New York City began tracking this data 25 years ago.

A local economy plagued by job losses and home foreclosures guarantees that these numbers will only rise, writes Patrick Markee, senior policy analyst at the nonprofit Coalition for the Homeless. Since June 2008, the number of New York City families in homeless shelters has increased by 12 percent.

“Your typical family today is a single mother with two or three kids,” says Ralph da Costa Nunez, president of the Institute for Children and Poverty. “Your typical homeless person is a child and the majority of homeless children are aged 6 or below. They are very young, and that’s because their parents are very young.”

• According to the Coalition for the Homeless, children account for nearly 15,500 of the city’s total shelter population of about 36,000. Throughout the course of the fiscal year 2009, approximately 34,000 different children slept in city shelters for at least one night.

• The health of homeless children often suffers from a combination of unsanitary shelter conditions, poor access to healthcare and chronic stress.

• 46 percent of New York City’s homeless children experience a decline in health after entering shelters. These children get three times as many gastrointestinal disorders and 50 percent more ear infections than non-homeless children, and they are hospitalized twice as often.

Source: A Shelter is Not A Home…Or Is It? Lessons from Family Homelessness in New York City, by Ralph da Costa Nunez (White Tiger Press, 2004).

For more information see “Growing Up Homeless” by Sarah Secunda in this issue of The Indypendent.