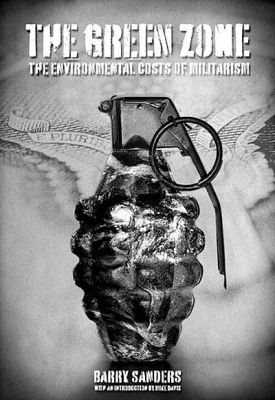 The Green Zone: The Environmental Costs of Militarism
By Barry Sanders
AK Press, 2009

As we have become more aware of our effect on the planet and its climate, many average Americans have taken steps toward a greener lifestyle. The Nature Conservancy conducted a poll a few months ago that found 53 percent of those surveyed engage in small actions like recycling, using green household products, and bringing reusable bags to stores. Perhaps, however, what is more revealing is the poll also found that nearly three quarters of respondents believe their personal actions are significant to the health of the environment.

Enter the buzzkill that is Barry Sanders’ new book, The Green Zone: The Environmental Costs of Militarism, in which he delivers a wake-up call to the green movement. Simply put, the solution is not in the hands of the people — at least not their literal pair of hands. But it is also not, as most of us might believe it to be, in the hands of the largest corporations. Sanders’ book brings into the environmental  discussion a “new” player. One that its environmental influence has yet to be seriously examined: the military. As the book presents it: “… ironically, that greatest single assault on the environment, on all of us around the globe, comes from one agency, that one agency in business to protect us from our enemies, the Armed Forces of the United States.”

Sanders, a retired English and History of Ideas professor at in , isn’t out to condemn the efforts of ordinary people. Most of his published works — including eleven other books on subjects as seemingly disparate as racism, laughter, and literacy — defend the average person from the degrading control of hierarchical systems. The way Sanders views the current state of the environment is no different. To him, “Citizens look like patron saints of the environment compared with the rampant destruction that the military causes.”

In order to make his case, Sanders presents an overwhelmingly fact-driven argument, listing various types of military equipment, their fuel source, and how much gets used. At first, it’s hard to see many of these details being of interest to anyone other than military buffs. But when Sanders manages to provide recognizable points of comparison, the numbers become quite damning.

For instance, even though we Americans consume on average 1.3 gallons of oil a day, deployed soldiers in 2007 burned about twelve times that amount, at approximately 15 gallons a day. It’s through this relation that we can begin to understand how the military is the world’s greatest consumer of not just petroleum, but energy, in general.

As bad as it is, however, the Pentagon’s figures don’t even come close to telling the whole story. As Sanders explains, “The DoD provides no official accounting for the amount of oil the military consumes in garrisons and bases abroad.” We don’t even know the exact number of bases — although some experts place the figure at slightly more than 800. Even so, there’s no doubting, at least according to what little information the Pentagon does supply, that it is the world’s largest landlord.

Furthermore, the Pentagon doesn’t count fuel that the military obtains for free — such as the likely great amount it receives from Kuwait — or the fuel consumed by the thousands of independent contractors, who lease, make or do things for the military. You can also forget about knowing how much energy it takes to rebuild countries like . The amount of unknown information and points of energy consumption go on and on.

Sanders puts it bluntly when he says, “As taxpayers we own stock in a nefarious corporation that cooks its books until they are well done.” Yet even he laments the fact that the military isn’t a corporation. If it were, then perhaps such behavior would be grounds for legal action, government intervention or consumer boycott. But none of the regular rules apply here.

Again, it would seem there’s little place for the average person to make a difference. But that’s where Sanders attempts to bring it back around. He suggests a number of well-meaning ideas for those of us who want to see restrictions placed on the military. Some — such as tax resistance — are radical, but wholly pragmatic steps that cut right to the heart of the issue: an increasing Pentagon budget. While others, such as the establishment of an education program that teaches about military pollution, are more long-term oriented. Sadly, neither seem like steps that the mass American public — too busy with the fad that is the green revolution — would find inviting.

If The Green Zone is short on viable solutions, Sanders needn’t be blamed. This is, after all, the first book to examine the relationship between  militarism and ecological destruction — something not even Nobel Prize Laureate Al Gore has been willing to address. Sanders has commendably begun a much needed dialogue.

Let’s just hope that those Americans who believe their personal actions are significant are willing to be put to the test.

The Indypendent’s Bryan Farrell asks his questions about The Green Zone and what should be done directly to the author, Barry Sanders.

BRYAN FARRELL: Right off the bat, in the introduction to your book, you say the largest source of pollution in the world is the military, particularly the military at war. What do you say to young people, many of whom are not as strongly opposing the wars as they are global warming and other environmental crisis?

BARRY SANDERS: I want them to see that they’re the same issue. It’s not going to make much difference what kind of soap you’re using or if your hand towel is recycled. If the military is laying out acres and acres of depleted uranium half way across the world, it’s going to find its way back here. Every time I talk that way, it comes as a surprise to students. We’re taught that every little bit helps. You give some money to a charity and it helps. But every little bit is not going to help when there’s a monster out there. I want to bust these categories and say, “No, it’s not about the military. It’s not about the environment. It’s about everything.”

BF: What about the military’s efforts to become more sustainable? For instance, Nellis Air Force Base in houses the world’s largest solar photovoltaic system and the Navy runs the largest wind/diesel hybrid plant in the world located in .

BS: There is a line in the book about how that basically means killing people with more efficiency. That doesn’t seem to me like something to rejoice about. When I was a kid I loved magic. Once you’re a fan of magic you learn that if the magician is showing you his right hand you ought to keep your eyes on the left hand. So I know that if the military is telling me to look at how clean this hand is, I need to look at the other hand. And that other hand is bound to be filthy with oil and blood. So I don’t want to look the other way. I want to look dead on at the military itself and what it’s doing. Not at the small little hybrid recommendations.

BF: There’s also the nihilist argument that even if the scales back it’s military, there are still other countries like with large military divisions. Would it really make a difference?

BS: Those other countries would not be using their military [if the scaled back]. would not have a missile system. Neither would or , if we didn’t show the way. We have a military budget that’s larger than every other military combined in the world. What would the world be like if we took a risk. What would the world be like if we scaled down and said to people that we’re the military everyone’s been afraid of. We’ve been the policemen of the world for so long. My own personal notion is that war is obsolete and that Earth has made it obsolete. There is a price to pay if you want to continue the way that we’re continuing and that is the price of the earth.

BF: People in so-called “developing countries” will clearly be paying the price first, while instability in those countries is likely to increase. Is there a possibility, therefore, that the military actually stands to benefit from global warming, perhaps by serving as protectors against food riots and climate refugees?

BS: I won’t go as far as to say that the military rejoices in its participation in global warming. But I will say that I do think the real war is yet to come and it’s going to be over resources. When millions of Africans moving north are looking for water and looking for food we’re going to protect our own interests. We’re going to become much more singular than how we need to be in the world, which is communitarian. I know the military is aware of this because they’re meeting about it and they’re talking about it. I think they will welcome such a war because it will have full support from this country. I don’t think that it is far fetched. They’re planning for it now.

BF: In the book you discuss tax resistance as a way individuals can take action. Why do you think tax resistance can be an effective method of protest? What else can be done?

BS: Johnson levied a telephone tax of 10 percent on people’s phone bills to support the war in and lots of people protested and refused to pay it. That sort of thing may be necessary now. My lessons are mostly from the ’60s with organizations like SDS [Students for a Democratic Society] and I think there’s a great deal of organizing that has to go on before there will be any kind of change. There will have to be a march on that’s 15 times as big as the march against the war in in 1965 where 250,000 people showed up or the march on in 1963 for civil rights where 200,000 showed up. The antiwar movement also has to change to the no war movement. It’s not enough to be opposed to just this war.