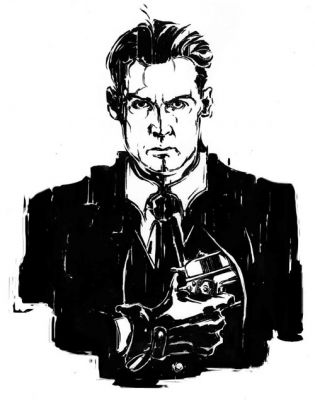 With Public Enemies, Michael Mann has crafted his most nostalgic and firmly genre-rooted work to date. The director’s latest feature is a throwback to the classical gangster films of the 1930s, when the notoriety of real-life criminals like John Dillinger blended with the exploits of their fictional counterparts to shape an enduring myth of outlaw populism. Accordingly, Mann’s Dillinger (Johnny Depp) embodies a larger-than-life blend of historical figure and film-historical character. Never more so than in the made-for-the-movies build-up to his death scene, he gravitates toward the big screen as if it were his mirror image.

This is Mann’s second period piece, and like his earlier The Last of the Mohicans (1992), its narrative chronicles a pivotal moment in the American experience, namely the culture’s entry into modernity, which both empowers and alienates Dillinger. Fast cars and automatic weapons are the tools of his bank-robbing trade, but burgeoning information technology subjects him to relentless surveillance and persecution by special FBI agent Melvin Purvis (Christian Bale) and his team of G-men. The paradox of Dillinger is also his tragedy: A thoroughly modern man, he holds an oldfashioned, romantic worldview akin to the filmmaker’s.

Mann’s extraordinary eye for realistic detail and his impeccable, sumptuous sense of style imbue the film with a dark glamour, redolent of the eponymous anti-hero’s fate. Like all Mann protagonists, Dillinger is a solitary warrior whose increasing isolation enhances his mystique. One by one, his fellow gang members fall victim to the war on crime waged by FBI Director J. Edgar Hoover (Billy Crudup); his support network dwindles as his high-profile status makes him a liability to underworld operations and his romance with Billie Frechette (Marion Cotillard) is severed upon her arrest and detainment. Left alone and crying, Dillinger proceeds to embrace his own larger-than-life public image to the point of becoming its foremost observer.

He unobtrusively walks into Chicago police headquarters, and while the cops huddle around the radio listening to baseball coverage, he takes in the display of pictures and documents used to hunt him and his cohorts down. Mann highlights this enactment of anonymity not to reveal the private man behind the public enemy, but to showcase how Dillinger makes manifest his destiny by identifying with the iconic presence he has cultivated. Personable yet aloof, Depp deftly underplays Dillinger’s grandeur to match the grim elegance of the gangster’s universe, and in a significant departure from the Tim Burton-shaped persona that has become second nature to him, exhibits a remarkable caliber of acting.

Also like Mohicans, albeit more implicitly, Public Enemies historicizes the questionable inclusiveness and pluralism of American democracy. The resonance of Dillinger’s death in 1934 triggered a vehement reaction from Hollywood’s Motion Pictures Producers and Distributors Association, which required all films made after 1934 to receive approval prior to their release, and led to the declaration of a moratorium on the gangster film genre the following year. This censorship aimed not only to appease concerns about the genre’s challenge to moral propriety, but also to address deep-rooted anxieties over its resistance to the consolidation of national identity, as movie gangsters brought to unprecedented prominence the look, talk and pedigree of the nation’s ethnic urban working class.

Mann portrays Dillinger as a natural, indiscriminate people’s champion by virtue of his total outsider sensibility. He has no qualms about Frechette’s Native American background and holds no prejudice against the foreign descent of Anna Sage (Branka Katic), the Romanian prostitute who ends up betraying him when threatened with deportation. More of an elegiac Douglas Fairbanks (whose agility Dillinger matched, earning himself the nickname of “Jackrabbit”) than big shot wannabe, he is a transitional figure, rebel to the leveling consumer capitalism and nativist-Protestant Immigration Acts of the Jazz Age, misfit between Prohibition repeal and New Deal promise.

Public Enemies is arguably a less personal film than any previous screen adaptation of Dillinger’s story. Less factual in tone and psychologically oriented than Max Nosseck’s unadorned 1945 Dillinger, and shunning the brawny revisionism of John Milius’ underrated 1973 interpretation of the same title, Mann’s retelling enshrines the gangster as a legend in his own time and ours alike. We get to see Dillinger not as an individual opportunist, but as an enemy for the public of the Great Depression. The relevance of his legacy to the current recession proves a need for poetic justice meted out by unlikely heroes rather than overblown recriminations against sad-sack villains.