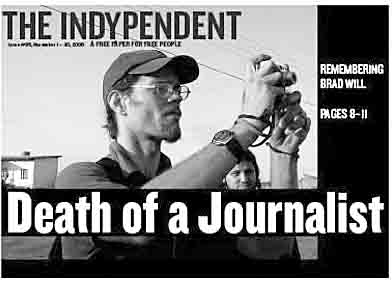 Supporters of slain New York City Indymedia journalist Brad Will are calling for the immediate release of Juan Manuel Martínez Moreno after a Mexican judge ruled that Moreno could be held in prison indefinitely in a murder investigation that activists say has gone horribly wrong.“As a friend I have been sickened, as his family has been sickened, by the ways in which Brad’s murder has been used by the Mexican government to further brutalize, intimidate and imprison the very people with whom Brad stood in solidarity in 2006,” said Mark Read, an New York University film professor who was a friend of Will’s and one of the organizers of the July 13 demonstration in support of Moreno held outside the Mexican Consulate at 27 East 39th Street. The rally drew about 20 people.The protesters also demanded that the U.S. terminate the Mérida Initiative, a three-year program that was launched in 2008 and is slated to provide $1.6 billion in equipment and training to the military and police forces in Mexico, seven Central American nations, the Dominican Republic and Haiti.Will, 36, was shot and killed Oct. 27, 2006, while filming antigovernment demonstrations in the southern Mexican state of Oaxaca. Several local officials were filmed and photographed in broad daylight firing in the direction of Will and anti-government protesters. Two of these gunmen, Orlando Manuel Aguilar Coello and Abel Santiago Zarate, were briefly detained after Will’s death but were soon released when Oaxacan authorities mistakenly asserted that the two bullets that killed Brad did not come from a .38 revolver, the same gun that both of the men had been carrying that day.Mexican officials have instead insisted on pursuing the theory that Will was shot at close range by protesters seeking to embarrass the government. Martínez Moreno, who was not on the same street as Will when the incident occurred, was originally arrested and charged with Will’s murder on Oct. 24, 2008, days before the Mexican government would have faced a reduction in U.S. funding due to its failure to make progress in solving Will’s case. According to Harry Bubbins of Friends of Brad Will, more than half a dozen Oaxacan activists who came to Will’s aid after he was shot also face arrest warrants after volunteering to testify to Mexican investigators about the case.On Jan. 19, Judge Rosa Pérez ruled that there was insufficient evidence to merit pressing charges against Martínez Moreno, a baker and father of three young children. However, on July 8, she reversed her previous decision and agreed to accept evidence from two “eyewitnesses” with close ties to the local government. While both witnesses have admitted they were not present at the crime scene, they claim that they heard Martínez Moreno was responsible for Will’s shooting.“If they allow testimony by people who weren’t there and who didn’t see what happened … then that’s a bad sign they are going to try and frame him,” Bubbins said.No trial date has been set.Carlos Davalos contributed reporting to this article. For more information about Brad Will, visit indypendent.org.