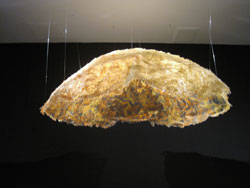 The bold yellow dome floats above the visitor’s head, capturing the light in its meandering threads and bathing the floor in saffron. Not only is Mahwish Chishty’s installation Gumbad visually stunning — it also evokes a feeling of dreamy comfort. The dome represents a mosque structure and a spiritual umbrella, poignantly conveying the artist’s devotion to the Muslim faith.

The “Perspectives: Women, Art and Islam” exhibit at the Museum of Contemporary African Diasporan Arts effectively conveys the multiple experiences and personal interpretations of Muslim women while also celebrating the artistic traditions of Islamic cultures.

The exhibit, which opened June 4 as part of the Brooklyn Academy of Music (BAM) Muslim Voices: Arts and Ideas Festival and will run until September 13 at the Fort Greene museum, features the work of five Muslim women focusing on their specific experiences. It is the first all-female show at the Museum of Contemporary African Diasporan Arts, and it is co-organized by the Museum for African Art. The exhibit encompasses the mediums of video, photography and installation, although there were only 11 pieces total.

The artists came from different backgrounds, hailing from Pakistan, Bangladesh, Algeria, Morocco and Brooklyn. Their varied interpretations of the theme emphasize the breadth and diversity of Islam. The curators, Kimberli Gant and Lisa Binder, sought to challenge the often misleading generalizations and assumptions about Muslim women by allowing the artists to speak for themselves.

“We wanted to make sure that we weren’t reinforcing the kind of ideas people see in the media about women in Islam as women who are very impoverished, very guarded and have no rights,” Gant said.

As a result, the exhibit features the personal stories of a few Muslim women instead of attempting to speak for millions of people. Each artist offered her own interpretation of the broad topic, which ranged from examinations of spiritual mysticism to a critique of the tension between modernity and piety. Despite the modest size of the exhibition space, the diversity of perspectives reflected in the art created a provocative display.

While the museum typically focuses on contemporary art, it was refreshing to see the influence of Islamic artistic traditions through instances of calligraphy, Kufic script and tile displays. Fariba Alam displays her original photography and painting on ceramic tiles, which allude to mosaic-tile mosques. The intricate arrangement of the tiles and repetition are striking. The images on her three pieces portray religious stories with personal voice. The Conference of the Birds, for instance, references a spiritual Sufic poem by superimposing bright peacock feathers over a vintage photograph of her mother and friends. The piece beautifully embodies the intersection of cultural, spiritual and personal aspects of Alam’s faith.

Simultaneously, “Perspectives” explores the geographical and cultural aspects of Islam through film. Islam, like other religions, is interpreted differently based on personal experiences and the physical location of its adherents. Nsenga Knight, a Brooklyn-based artist, emphasizes the connections between African Americans and Islam in her film, As the Veil Turns. Knight interviewed several African-American women in Brooklyn who were raised Christian but later converted to Islam, many during the Civil Rights Era. Their stories provide a view into local Muslim communities and portray Islam as a cultural link to ancestral traditions.

Other displays examine the tension between modern women and religious and cultural traditions. Safaa Erruas employed multiple sections of soft white cotton and combined them with wire and needles to represent perceived femininity. Her work does not have an obvious parallel with Islam, but the piece serves as a reminder that religion is only one aspect of a person’s identity.

Zoulikha Bouabdellah challenges the perception that Muslim women are constrained by their religion; rather, she playfully juxtaposes glamorous stilettos with traditional prayer rugs. Her installation is not a criticism of Islam, nor is it intended to make a definite statement that Muslim women should embrace modernity and fashion. Bouabdellah effectively captivates viewers and causes them to examine the complex relationship of women and Islam.

While all five artists offer different perspectives about women and Islam, none attempt to speak for all Muslim women. This demographic has often been homogenized and silenced by Western media, even though Islam means something unique to every woman. “Perspectives” is refreshing in that it simply provides five Muslim women with an opportunity to express themselves without the pressure of making broad political statements. Ultimately, the greatest beauty of the exhibit is that it celebrates the diversity and multiple layers of Muslim women through aesthetically and intellectually stimulating art.