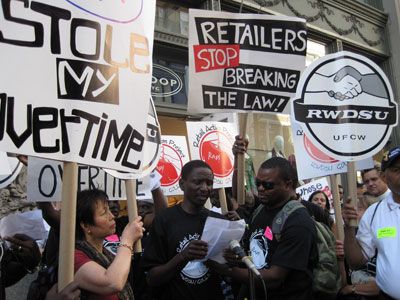 Silent mannequins wore designer jeans and expensive dresses inside the display windows of Scoop NYC’s SoHo location, but the chanting crowd outside the store on July 8 mostly wore t-shirts with workers union and activist logos.

Hours after 15 former workers filed a lawsuit against Scoop NYC, dozens of people gathered outside the high-end fashion boutique’s store at 475 Broadway to protest the chain’s unfair labor practices and discrimination against immigrant employees.

“Even though the owners of Scoop NYC like to think of themselves as trendsetters in the fashion world, their labor practices aren’t only a throwback to the time of the sweatshops, but the era of the plantation,” said Stuart Applebaum, president of the Retail, Wholesale and Department Store Union (RWDSU).

The protest, organized by Retail Action Project (RAP), focused on the complaints of former Scoop NYC stock and security workers regarding unsafe working conditions, unpaid overtime and discriminatory termination. According to former employees, the stockrooms at Scoop NYC were not insulated, which meant that workers were severely cold in the winters and hot in the summers. These basement stockrooms also had loose wires and sewage leaks. Workers were rarely given breaks during their frequent 12-hour days.

The stock and security workers regularly worked 50 to 60 hours a week but did not receive overtime pay for hours worked over 40. The legally mandated overtime rate is 1.5 times the hourly pay, but workers said they were never compensated for overtime work. During their employment, several of the stock and security workers were promoted to manager positions. However, the content of their work did not change significantly with these promotions. They complained the only difference was that, as managers and assistant managers, they were given a salary instead of the hourly wages they had initially been paid.

“They used me,” said former employee and Cameroonian immigrant Georges Epoh. “That was just a name, to say I was a manager.”

On July 8, attorneys at Cary Kane LLP filed a lawsuit against Scoop NYC on behalf of 15 terminated employees for unpaid wages and violations of the Fair Labor Standards Act (FLSA). The attorneys estimated that Scoop NYC owes the 15 workers over $300,000 in unpaid overtime wages and $200,000 in lost earnings since their terminations.

Demonstrators at the protest also accused Scoop NYC of discriminating against immigrant workers by firing them without reason. Most of the fired workers are immigrants of African descent who had been employed by the upscale chain for years. According to RAP, Scoop NYC fired seven of these immigrant workers without warning in late 2008, claiming they were undocumented even though they had shown their labor documents upon being hired and presented them upon request.

“They did not care that I had my labor papers — they did not even look at them,” said Romauld Ilboudo, a former Scoop NYC employee from Burkina Faso. “Scoop had a list of names and they were going to fire us no matter what. The company lied to us and discriminated against us.”

Retail Action Project became involved when some of the fired workers asked RAP for assistance in finding new jobs. The former Scoop NYC workers told RAP of the conditions under which they had been working and their unexpected termination. RAP representatives have been working with the former employees and helped them find legal representation.

“These are guys from other countries who want to work just as hard as anyone else here,” said RAP coordinator Peter Montalbano. “They’re really good people, and their spirit inspires me to continue doing this.”

Scoop NYC did not respond to The Indypendent’s request for comment. The first Scoop store was opened in April 1996 in NYC under the “ultimate closet” concept, meaning that customers could buy luxury clothing and accessories in one location. The success of the initial store led to the opening of 10 more locations, five of which are in NYC. The plaintiffs in the lawsuit worked at locations in New York and New Jersey.

“The Lower East Side has been a community for decades that has welcomed people of all nationalities, all immigrant populations, and we are proud of that history,” said Damaris Reyes, Executive Director of Good Old Lower East Side (GOLES). “As such, we embrace these folks and we stand by them in this fight.”

Demonstrators were hopeful that the terminated workers would succeed in their lawsuit, but they also warned that the poor treatment of immigrants is not unique to Scoop NYC. 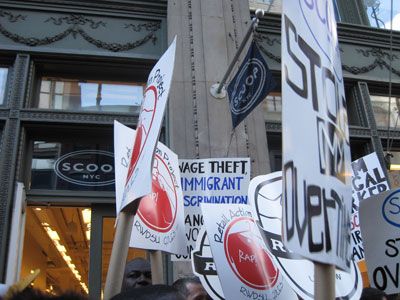