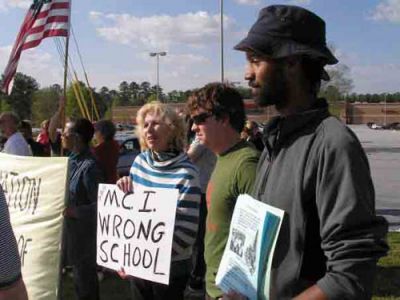 The U.S. Marine Corps and the school board have postponed their plans to establish a military-themed high school after more than 100 parents, students, peace activists and veterans in the Atlanta-area community waged a two-month campaign against it.

“No one had successfully opposed one of these schools before,” said Tim Franzen, the American Friends Service Committee staffer who helped lead the campaign. “We had to go up against the board of education and possibly the most powerful entity in the world, the American military-industrial complex.”

The activists fought the school because they believe it would be used as a tool to recruit youth in the suburbs into the military, a charge both the school’s planners and Marine Corps have denied.The DeKalb Marine Institute (DMI), which was scheduled to open on Aug. 10, has been postponed indefinitely.

Dale Davis, a spokesman for the DeKalb County Board of Education, said that the opposition did not have an impact on the local school board’s decision to put DMI on hold. Instead, he attributed the decision to the Marine Corps’ failure to sign a “memorandum of agreement,” which would have committed it to funding and operating the project at an initial cost of $1.4 million.

Franzen and local activists are skeptical of ’ claim.

“We showed up at every single [school] board meeting, first with dozens and then with at least a hundred people,” Franzen said. “By June, we were controlling the story, dominating the public discourse and our campaign was all over the press. … As a result, we put them in the hot seat.”

The decision in comes as the military is taking an ever-increasing role in public education. The Associated Press reported June 28 that the Marine Corps is in discussion with at least six school districts — including locations in suburban , and . These schools will require students to wear a uniform, participate in Junior Reserve Officer Training Corps (JROTC) and take military classes.Obama’s Secretary of Education Arne Duncan championed military high schools during his seven-year tenure as CEO of the school district, helping to open five military-themed schools.

“I think what we are seeing today is a new infusion of militarism into our schools,” said Arlene Inouye of the Coalition for Alternatives to Militarism in Our Schools. “It is subtle, but it is embedding education with a military structure. … It is always done insidiously, behind the backs of the community. It is the military way.”Although other communities, such as , have rallied against military academies, they have had little success in stopping them.

“Teachers in have been fighting [the schools], but they have not been able to stop it the same way they have in ,” Inouye said. “DeKalb is considered a model in terms of organizing and coalition building with students, parents, teachers and veterans.”

While these schools continue to sprout up across the country, there are questions about their legality. During the DeKalb campaign, the ACLU of Georgia drafted a resolution stating that “the U.S. military continues to engage in tactics designed to recruit students under the age of seventeen, despite its binding obligation to only recruit persons seventeen and older” under the Optional Protocol to the Convention on the Rights of the Child.

This protocol, which the United States Senate ratified on June 18, 2002, makes it illegal for any government agency at the federal, state or local level to recruit children under the age of seventeen for military service.

The ACLU cited DMI as an example of underage recruitment activity, saying “the Dekalb County Marine Corp Institute will be funded in part by the Marine Corps out of its recruitment budget, will expose students under the age of seventeen to military discipline, military culture, and military training, and could become a pipeline for targeted minority recruitment into the military.”

Spokesman Dale Davis denied claims that the school in would be used for recruitment, labeling them “speculation.” When asked how the DeKalb County School System would ensure that the schools would not be used for recruitment, he said the aforementioned memorandum of agreement that has been drafted but not yet signed by the school system and the Marines contained assurances to that end. He refused to provide a draft of the memorandum, however.

For its part, the Marine Corps says that if DMI goes forward, it will be funded by its Training and Education Command rather than its Recruitment Command. The Marines said that the school was meant to provide students with a disciplined environment and a rigorous math and science curriculum, nothing more.

“Some students find that they thrive in environments that focus efforts through team building, leadership development and a greater degree of discipline,” said 1st Lieutenant Joy Crabaugh, a spokesperson for the Marines. “JROTC programs can help provide an atmosphere conducive to disciplined development.”The DeKalb activists are aware that their purported victory may be short-lived. In a June 2 press release announcing the postponement of DMI, the school system said that it “will continue to communicate with the Marine Corps with hopes of finalizing an agreement. If accomplished, the school system will move forward with plans to open the school in August of 2010.”

Latasha Walker, who has a daughter enrolled in a DeKalb county school system, and was active in the campaign, recognizes the need to keep pressure on the school board.

“We definitely need to continue making sure that they never build a DMI,” she said.

“The school board is very sneaky.”

He plans to attend all board of education meetings for the foreseeable future in order to monitor the situation, he said. In addition, he and a handful of fellow campaigners went to the National Counter-Recruitment and Demilitarization Conference in , July 17-19, to reach out to potential allies and devise new strategies to combat what they call the “militarization of public education.”