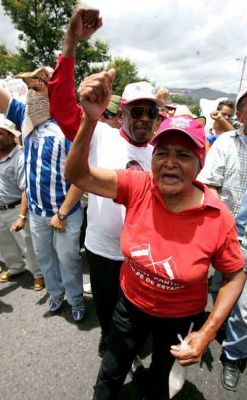 Manuel “Mel” Zelaya is a rancher and business owner who wears large cowboy hats and, in November 2005, was elected president of Honduras, an impoverished Central American country with a population of 7.5 million.

On June 28 the Honduran military, backed by the country’s elite, removed Zelaya from power. He instantly became a focus of attention for the U.S. media — his statements were examined, and his appearances at the United Nations and regional meetings were dutifully covered. Most media depicted him as a major “leftist strongman” seeking to extend his term of office in the style of Venezuelan President Hugo Chávez.

But was this coup really about a leftist strongman?

“What Zelaya has done has just been little reforms,” said Rafael Alegría, the leader of the local branch of the international group Vía Campesina (“Campesino Way”), to the Mexican daily La Jornada June 29, referring to initiatives like a long-overdue increase in the minimum wage, an expansion of primary education and a school meal program.

“He isn’t a socialist or a revolutionary, but these reforms, which didn’t harm the oligarchy at all, have been enough for them to attack him furiously.”

Zelaya wanted to hold the non-binding referendum June 28; the local elite and much of the U.S. media described as a power grab. In reality, Hondurans would simply have been asked whether they wanted to vote in November to elect a constituent assembly that would be responsible for rewriting the 1982 Constitution — and there is no way any constituent assembly could finish its work in time to keep Zelaya in office after his term expires next January.

A more likely motive for the coup lies in the Honduran oligarchy’s fear of what would happen if the people got a chance to write their own Constitution.

RISE OF A MOVEMENT

Early this year, Honduran teachers went on strike for back pay and held a sit-in at the education ministry. In February, the Civic Council of Grassroots and Indigenous Organizations of Honduras (COPINH) organized a 12-day mobilization to protest the destruction of forests. Hundreds of indigenous Chortí blocked access to the Copán archeological park in April, probably Honduras’ most important ancient Mayan site, to press demands for land.

These protests continued long-term struggles, some going back years, by groups that managed to grow despite repression from an elite backed by military regimes from 1963 into the 1980s, by the CIA-trained Battalion 316 death squad in the 1980s, by continuing U.S. military aid and a U.S. military presence at the Palmerola Air Base.

The social movements, which frequently support each other and coordinate their actions, are now confronting the coup — bringing tens of thousands of protesters out on the streets, leading strikes, blocking highways, keeping the news flowing as the military shuts down independent media. If anything, the coup may be strengthening this movement.

The growth of social movements in Honduras reflects a pattern. Everywhere you look in the hemisphere, the protagonists of the drama are increasingly “the people from below” — los de abajo, as Mariano Azuela called the subjects of his novel of the 1910 Mexican Revolution.

These struggles get little media attention here in the United States, but they have a direct bearing on los de abajo of our own country. Working Americans understand the effects of outsourcing industrial work to other countries, and they know about the pressure undocumented workers put on the wages of the native born. What they do not know is how these phenomena are linked to U.S. foreign policy.

WORKERS’ RIGHTS: THERE AND HERE

Some 100,000 Hondurans now work in their country’s maquiladora sector, which assembles apparel and automotive parts largely for the U.S. market. About 400,000 Hondurans live in the United States, according to 2004 Census Bureau data. Hondurans don’t actually want to do backbreaking labor for minuscule pay in maquilas in San Pedro Sula, much less risk their lives crossing the border to work in the sweatshops of Los Angeles and New York. It is repression by the U.S.-backed military and oligarchy and the hardships resulting from U.S.-promoted economic policies and U.S.-dominated trade deals like the Dominican Republic-Central America Free Trade Agreement that have forced Hondurans into these jobs.

It does not do U.S. workers any good to rail against foreign countries and “illegal” immigrants. If people here are serious about defending their standard of living, they have no choice but to oppose their government’s foreign policies and to support their counterparts in countries like Honduras. Unions like United Electrical Workers and organizations like the National Labor Committee, Students Against Sweatshops, and the Maquila Solidarity Network are already active in this work. We need to back them — and maybe learn some lessons from Latin America about how to fight for our rights.

David L. Wilson is co-editor of Weekly News Update on the Americas and co-author, with Jane Guskin, of The Politics of Immigration: Questions and Answers (Monthly Review, 2007). This article was adapted from an article published on monthlyreview.org.