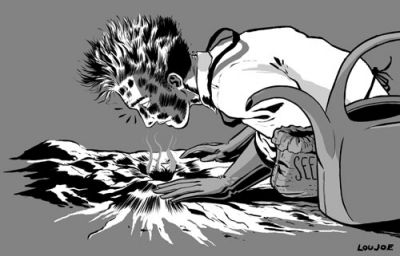 Over the last few months a chorus has risen to a deafening volume. Pundits and talking heads sing of green shoots and economic rebound. As strange as it seems, they sing of renewal not because the economy is getting better these days, but because it is getting worse at a slower pace than during the financial meltdown that began last fall.

However, reducing a national economy of many moving pieces and trillions of interactions between people in the United States and around the world to a single number such as the GDP is difficult. So even if we technically exit recession later this year, which is not a given, most people will not notice an improvement in their fortunes because of their position in the economy.

In this recession, as an old saying in the real estate business goes, the three most important factors are “location, location, location.” It is a fitting description for a recession born, in part, of a real estate boom gone terribly bust. Recently there has been a profound parting of ways between well-positioned people and industries and most Americans.

Many people are hurting. House prices are falling. Work is hard to find and hard to keep. Overtime and benefits have become scarce. Prices have not fallen for our basic needs. Crime rates have risen. Economic problems and stress have put millions of people on the edge or over it.

Unemployment is high and rising. As of July 1, the national unemployment rate was 9.5 percent. If we use the broadest measure (called U6 by the government), which adds in folks who have given up looking and involuntary part-timers, the rate is 16.5 percent. There are 14.7 million Americans officially unemployed, up from 7.5 million in December 2007. There are 4.4 million people who have been unemployed for more than half a year. Clearly, the hordes of unemployed are in the wrong location in our economy.

Many homeowners are also in a bad spot. In 2008, 3.1 million foreclosure filings took place. In the first half of 2009, 1.9 million foreclosures were filed. Foreclosures are increasingly driven by unemployment. Prime mortgage borrowers, made to people with higher credit scores — and often larger incomes — now account for more new foreclosure notices than sub-prime borrowers. Late payment and default rates on credit cards, auto loans and home equity lines of credit are also high and rising.

Autoworkers and the growing multitude of former autoworkers are in another poor economic position. The GM and Chrysler bankruptcies have resulted in 2,000 auto dealerships closing, costing over 50,000 jobs directly. This will add to unemployment, sap local tax rolls and hurt other businesses, neighborhoods and towns.

Remaining employees will have fewer benefits, less job security, a weaker union and millions of shares in GM and Chrysler/ Fiat. The UAW has also given up the right to strike at the two companies through 2015.

Taxpayers have pumped over $100 billion into GM, Chrysler/Fiat, auto parts makers and tax cuts for new vehicle sales.There are some bright spots. Federal assistance has allowed millions to remain on the unemployment rolls longer. There are presently 2.5 million Americans receiving unemployment benefits because of extensions that allow for up to 33 additional weeks of benefits.

On the other hand, California is considering slashing welfare assistance to 500,000 residents and healthcare to over 900,000 low-income children. California is not alone in cutting assistance to the most vulnerable because of huge state budget deficits and an unwillingness to raise taxes. The National Governors Association reports that 41 states reduced budgets in 2009 by an average of 2 percent. Most estimates suggest budgets will be cut by up to 3 percent in 2010. Federal assistance from the Reinvestment and Recovery Act is helping states but not enough to offset falling taxes completely. State workers are facing wage cuts, lost days, reduced benefits and public anger.

About 46 million Americans, particularly those who are younger or have low incomes, are without insurance at some point every year. Healthcare costs have been rising much faster than wages for the last 30 years, even as we have some of the worst health indices in the developed world.

If Congress passes any healthcare plan this year it will likely be a version of the Wyden-Bennett Plan, in which federal and state governments provide subsidies to lowand moderate-income Americans and mandate that they purchase health insurance or enter a public plan. Issues with the plan include disputes over state versus private economic activity, the cost of the plan and its ability to extend quality, affordable care to all Americans.

The Obama administration and Congress are attempting to build a mixed healthcare system that leaves for-profit insurers and employer-based coverage in place while leaving some people out. We will have more state involvement and shouldering of costs. This plan may prove very expensive and politically polarizing over the coming years. More people will have care and for many the plan may be helpful.

A Reagan-era trend of cutting taxes and increasing spending went into overdrive with the recent Bush administration. He nearly doubled the national debt from $5.7 trillion in 2001 to $10.6 trillion by 2009. The first two years of the new administration will rack up 60 percent of the entire debt America had in 2001. The Congressional Budget Office estimates a 2009 budget deficit of $1.8 trillion and a 2010 budget deficit of $1.4 trillion.

How did we get so far down this road? American business and wealthy individuals have loved and pushed for tax cuts for decades without massive cuts in government spending. Foreign interests own $3.2 trillion of our debt and foreign government agencies own $2.3 trillion of our debt. This is changing America’s position in the world and adding powerful foreign voices to every policy decision we make.

In response to the speed and depth of the economic crisis, Congress and the Obama administration passed a $787 billion stimulus package. Despite the eye-popping price tag, the stimulus is designed to reduce the depth and duration of the downturn by filling some of the massive and rising revenue gaps on the state and local levels, and easing the length of and rise in unemployment.

Through July 2009 about 15 to 20 percent of the stimulus money has been spent. As with most Obama policies, the stimulus is gradual and moderate in scope and was not designed to change the way the U.S. economy works.

Like the trillions being spent or loaned by the U.S. Treasury and Federal Reserve System to the finance and banking sectors, the aim of the stimulus seems to be to return America to the economy we had from 2001 to 2007. This period may look idyllic now, but policies and economic decisions made during these years play a big role in our current difficulties.

The economic downturn has been bad news for everyone. Some were helped back to strength fast and full. Goldman Sachs reported a $3.44 billion profit for April to June 2009, and JP Morgan Chase reported $2.7 billion. These firms were beneficiaries of access to government credit at very low interest rates coupled with a dramatic increase in U.S. and foreign stock markets over the last few months. Many of their competitors have been closed or crippled and no new regulations have been passed. This has created a sweet spot in the crisis for the largest, best-managed and most nimble financial firms.

These firms are not alone. The early evidence is that rebound is largely concentrated in a few already favored locations. This offers us a dual warning. One, inequality is growing. This is alarming, given how unequal the distributions of wealth and income were in America before the present downturn. Two, we have yet to see any significant evidence of the much-heralded change that so many want and need. It remains to be seen how the public handles mounting evidence of big bills and small change.

Max Wolff is an economics instructor in International Affairs at The New School and blogs for the Huffington Post.