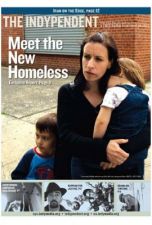 I fully support a single payer system but the profit-greedy insurance industry has Congress in their back pocket. We have a totally corrupt political system where only lobbyists money counts.
—Nathan Kayale

All forms of direct nonviolent action to get attention and awareness seem like a good thing. Howard Zinn discusses such actions in his book, You Can’t Be Neutral on A Moving Train. Zinn makes this point: You never know what action, no matter how small, might have an effect on someone. Noam Chomsky calls the gap between what the people want and what the government wants/does the “democracy gap”. People need to know their power. Glen Ford (blackagendareport.com) recently spoke in a meeting of the Harlem Tenants Council combined with Take Back WBAI at St. Mary’s church in Manhattan. He talked about the corporatization going on, and this comment sticks with me: “The only power stronger than organized money is organized people.”
—Sanda

The draconian twists and turns of the shelter system are familiar to me from having advocated on behalf of people trying to house their families. At first I was shocked at the lack of compassion and just plain cold-heartedness of the city’s Department of Homeless Services workers, eventually it became second nature to see them throw families out for violating one of their many mysterious regulations. Often they tried to send people back to abusive homes, homes they had never lived in with family they did not know, or to apartments where their presence would cause the lease-holders to face eviction. As long as they could get the person out of their face they did not care at all.
—Max

These are not “new homeless.” This has always been the case, since Newsweek entered the term “Homeless” in the American Lexicon, in December 1984. Back then it was just another Reagan Hard Luck Christmas magazine cover … I remember well. I looked at the world pass by from a cardboard box in those days. (I am stable in a rented room now.) Back then we were mostly young men. Veterans (like myself), out of work tradesmen, construction workers, laid-off factory workers; bread winners for their families. I saw young couples bringing up their young ones in the street. Those young people are now in their 20s, and are struggling to raise their kids in the street. This would be the third generation of young people to call the streets of the United States their “home.” The Republicrats dismantled the social safety net decades ago. We are back to square one now.
—Mike Martinez

BORDERS AND MOTHERHOOD
Responses to “A Mother’s Nightmare: A Senegalese Woman Struggles to Save Her Daughters,” June 25:

I have a hard time believing how inhumane our immigration system has become and to think that it can even get worse. I pray for a positive solution for this mom and her kids. I’m also a mom and think we should all stand up for moms like her who face the worst fate — separation from her children.
—May

I’m so glad that you all are covering this story and speaking out for the rights of immigrants. Thank you for the great coverage and keeping us aware of the issues.
—Betty Ming Liu