He stares at the screen, waiting. His wife finally appears. “Hey, someone wants to say something to you.” She hoists his daughter up. “Hi, Daddy.” He strokes the screen. Outside is the lunar landscape, vast starry space and, in the distance, Earth, where his family lives. After a three-year contract as the sole employee working to mine the Moon for fuel, astronaut Sam Bell is going home.

In the film Moon, Bell (played by Sam Rockwell) ambles through work chatting with GERTY, the intelligent computer that provides his only real-time communication. In two weeks he is scheduled to return to Earth. Like Odysseus in Homer’s Odyssey or Tom Hanks in Cast Away, Bell is a symbol of an alienated man longing for home. It’s a story retold endlessly, but what matters is how we are lost and what home means.

Bell represents the epitome of the post-industrial worker, trapped in a dull drone, eyes weary from computer screens, insecure at being an appendage to a bureaucracy more valuable than life. This is our inheritance. Our generation walked into the history of the preceding one and we’re looking for an exit. For Bell, that exit is his family — that is, until he learns that not even they are real.

When the mining equipment breaks, Bell heads to the lunar mine to observe the scene, but sees instead a hallucination of his wife and crashes, bringing life as he knows it to a jarring halt. He wakes up in the infirmary, looking younger, but dazed. Once he learns that the mining tank is broken, he takes an unauthorized trip back to the site. He pries open its lid and finds a man inside. Bell hauls him to base, lays him on the floor and stares at his own face.

The injured man revives and Bell circles Bell. “It’s obvious you’re a clone,” one says. The young Bell grimaces, “Maybe you’re the clone.” But they suspect a deeper horror. The older Bell hobbles to the computer and unlocks a secret record of Bells, detailing how each one, eager to return home, became sick, was told to lie in an Earthbound capsule and was cremated.

He limps to the room, fingers the ash and pulls up a floor panel. Both clones climb down into a hall of morgue-like drawers. They pull one out and see a sleeping Bell.

They discover that they are both clones and their genetic clock stops at three years. It’s why they get sick at the end. They are not meant to leave. They are disposable men. 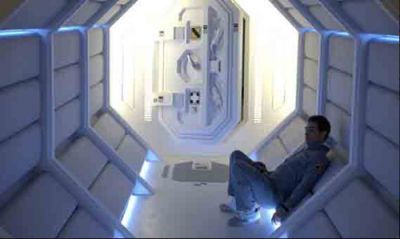 But the older Bell drives a moon rover beyond the base, pulls out a laptop and calls home. A woman answers. He asks to speak to his wife. “She died years ago. I’m her daughter.” His lips purse, “Oh, sweetie, how did Mommy die? Are you okay?” Befuddled, she creases her eyebrows: “Dad? Someone’s asking about Mom.” A man’s voice booms, “Who is it?” It’s the original Bell, and the clone shuts the laptop. He turns and turns in his seat, staring at Earth, saying, “I want to go home. I want to go home.”

The movie critiques the origin-journey, but unlike Homer’s Odyssey, there is no home. Bell remembers a life he did not actually live. Against the humanist tradition in which inside each of us is a unique soul that transcends the body, Moon shows us a body trapped in a manufactured soul.

It is a critique that philosopher Michel Foucault began in Discipline and Punish, where he writes, “It would be wrong to say the soul is an illusion. … It exists, it is produced by the functioning of power. The soul is the effect of political anatomy; the soul is the prison of the body.”

Home was a false memory, installed by the corporation to trick him into three hard years of work, the years that end up defining his short life. At the end, the execution team sent by Lunar Industries finds the older Bell in the crashed rover. He has planted himself inside so they wouldn’t look for the young Bell who now has a chance, not to go home, but rather to create one.