Many wheels surrounded the walls of the Atlantic Gallery Thursday July 7 in the gallery’s celebration entitled “Reinventing the Wheel” as a part of their ongoing Sic Transit Gloria exhibit. The exhibit will continue until July 23, but the special presentation last night combined speakers from Transportation Alternatives, Times Up and the New York City Department of Transportation.

Curator Pamela Talese, an avid cyclist herself, was very excited about the event last night and said, “The mood at the opening and the mood last night was one of excitement and very positive and people have written to me and said they learned so much and they loved the bike maps.” Talese brought together more than 50 people in the room to view 59 artists and watch four special presentations.

The Atlantic Gallery is an artist cooperative gallery that formed in 1974 on Atlantic Avenue in Brooklyn. Talese noted how back in the 70s there were nearly 40 galleries that were cooperatively run by the artists, 10 of which remain today, according to Talese. She explained why she had the event and her goal in bringing the many presenters together, “I’m a New Yorker and I’m part of these groups as well, I’m a cyclist and I thought this would be a good show.”

The display of artwork itself was extremely diversified from using subway maps as a canvas or to create a dress, to photographs of a village in India with people walking and carrying baskets on their heads. The images displayed varied almost as much as the mediums that were used.

In the corner stands a pair of black pumps painted vibrantly with color on a block of concrete on top a pedestal next to a painting of Grand Central Station’s main platform from a balcony above during what appears to be rush hour. In the same alcove hangs three tiles of fish attached on a chain entitled, “Go With The Flow” that sit next to a brilliantly colorful image of a train charging through a graffiti-filled sky.

The presentation itself began with a work of art, a Dutch photographer’s short film entitled “Feitsen” taken in 1965 Amsterdam and set to Vivaldi’s “Spring”. Ed Van Der Elsken’s black and white footage showed many serious faces of the masses of biking commuters and drew snickers from the crowded gallery. The combination of thousands of bikers and a few small cars roaming the hills of Amsterdam was enough in itself to put smiles on everyone’s face in the crowd.

Keeping the smiles on people’s faces was Paul Steely White, executive Director of Transportation Alternatives, who was the first to speak to a room filled with eager eyes and bicycle helmets. White focused his discussion on crafting a “post automobile city.” White said, “When people think of the future of the city or the future of transportation, a lot of people think of jet packs or Segways.” White went on to give statistics about the death rate of pedestrians in the city, children especially, due to automobiles and said the city contains 10,000 acres devoted entirely to on-street parking spaces. Through some humorous slideshow images, White showed how once a year his group takes back a few of those spaces for a day and turns them into public spaces. The image he showed behind his head was a parking space filled with fake grass with a few lawn chairs sitting out, a blanket and a couple of people enjoying the sunny day outside in their newly renovated public space. “We know what we have to do but its just about actually doing it and the frontlines are your local streets,” White encouraged in front of the warm image.

“We’re still really at the beginning of this transformation of New York City,” said Dani Simons from the New York City Department of Transportation, beginning her presentation. Simons added that the department has successfully doubled the miles of bike lanes in the city in the past three years and said, “We have more bike commuters in Brooklyn than the entire city of Portland.”

Steve McMaster from Times Up NY then got up to present three videos about what the group is doing around the city and profiling many Critical Mass bike events as well as the taking back of the Sheridan Expressway in the Bronx. Along with all the presentations were many informational pamphlets, mostly focused on biking, and even bumper stickers and bike maps of New York City. 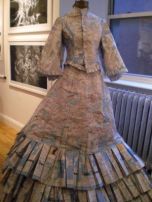 The variety of organizations represented reflected well on the diversity of the artwork. The key piece in the room however, was a full-length dress made entirely out of subway maps. The gown had a classical fringe around the jacket which had long sleeves attached and a perfectly cut and fringed collar. The maps seemed pasted together and almost gave the appearance of papier-mâché on the body of the skirt. The skirt itself had three layers of pleated maps on the bottom in the front and a tail at the back to match the pleated tail at the back of the jacket. The work, entitled “Brooklyn Day Dress 2007” by artist Meredith McNeal was stunning and demanded not only a lot of maps, but also a lot of hours for all the detail that was required by the design of the dress. “I will do anything to get this in our show,” said Talese to McNeal while still collecting the artwork for the exhibit months ago.

Many of the works around the wall were beautiful and stood out in many observers minds as well as Talese’s. The large “Staten Island Ferry” by Griselda Healy drew many eyes at the contrast between a businessman, in a suit leaning against the wall with reading glasses and an un-done tie, reading the paper on the ride home to a man slumped over in a seat with unlaced Timberland boots, his head between his knees.

Many of the works focused on bikes as well such as the large scroll painting entitled “Bicycle Wheels” by Gerry Tuten. The simplistic model of the bike is outlined in black with dabs of outstanding yellows to seemingly emphasize the spirit of the cyclists gathered in the room to talk about change in New York City and celebrate biking.

“I just want everybody to get on their bikes, the more cyclists on the streets the safer and happier everybody will be,” said Talese.

For more information visit the Atlantic Gallery’s website at atlanticgallery.org. The exhibit runs until July 23, 2009.