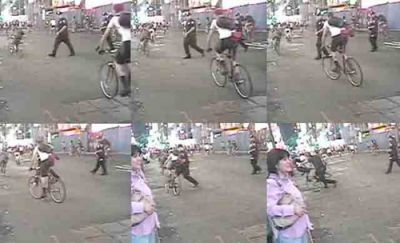 It’s been one year since NYPD officer Patrick Pogan slammed Christopher Long off his bicycle in Times Square during a Critical Mass ride July 25, 2008.

Luckily for Long, the incident was captured on video by a nearby tourist (see still frames at left). New York City-based video activists immediately took action and tracked down the tourist and purchased the clip for $310.

“It’s an amazing example of how video can impact what’s going on,” said Bill DiPaola, executive director of Times Up!, a local environmental direct action organization.

It’s likely the video will again get attention, this time in the courtroom. On July 7, Long filed a $1.5 million civil lawsuit against the NYPD.

The role the video has played has already been momentous. The city initially charged Long with attempted assault of an officer, resisting arrest and disorderly conduct, but dropped all charges against Long last September, most likely because of the online video. Pogan later admitted to filing a false testimony in his police report and resigned in February.

“This was a smoking gun, not just of police brutality and violent suppression of political speech, but more important a window into how NYPD is infested with a culture of systematic lying,” said Vlad Teichberg, a member of the Glass Bead Collective video activist group.

August marks the fifth anniversary of the police department’s violent crackdown of the once popular Critical Mass monthly bicycle ride. On Aug. 27, 2004, during the Republican National Convention, more than 5,000 bicyclists took over Manhattan streets to protest the Bush administration and advocate for bicycle-friendly neighborhoods.

At the end of the ride near St. Marks Church, the NYPD stormed in arresting some 260 people and confiscating hundreds of bicycles. The rides have continued on the last Friday of each month, but numbers have dwindled since 2004 as a result of the regular heavy police presence and disruption of the ride by issuing summons to riders for minor traffic violations and not having proper bicycle lights.