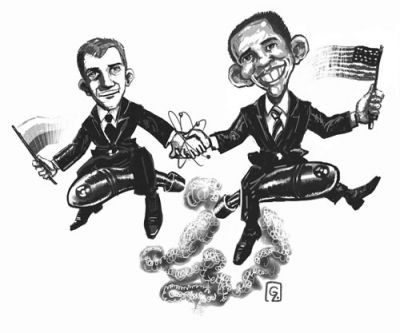 The signing of a “joint understanding” by U.S. President Barack Obama and Russian President Dimitry Medvedev July 6 to cut the two countries’ nuclear arsenals is a hopeful step forward in creating a nuclear weapons-free world.

However, as the agreement sidesteps numerous contentious issues — such as U.S. plans for anti-ballistic missile sites in Eastern Europe and NATO’s status — it still leaves humanity living under the threat of nuclear annihilation for years to come.

The document is not a treaty or legally binding document; it only signifies that the leaders “agree to agree” on reducing warheads and delivery systems. Negotiators will work on drafting a treaty with a projected duration of 10 years and a completion date of this December when the 1991 Strategic Arms Reduction Treaty (known as ST ART I) expires.

It remains unclear how much a new treaty will reduce the U.S. and Russia’s strategic nuclear weapons because they are covered by two separate treaties, ST ART I and the 2002 Strategic Offensive Reduction Treaty (SORT). Under SORT, Russia and the United States are required to limit the number of warheads to somewhere between 1,700 and 2,200 by 2012.

On July 16, the U.S. State Department announced the United States had met its SORT requirements in May 2009 when it cut the number of “operationally deployed strategic nuclear warheads” to 2,126. Only counting “operationally deployed” weapons, however, allows active nuclear weapons that are literally sitting on a shelf not to be counted. The actual U.S. stockpile, according to a recent estimate by the Federation of American Scientists, is 5,200 warheads. As for Russia, the State Department put its stockpile at 3,909 weapons as of January 2009.

But if Russia and the United States can agree on the principle of “irreversibility” to permanently eliminate non-deployed warheads and verification procedures, both of which SORT lacks, then actual stockpiles could be reduced by thousands of weapons.

Even if a new treaty is hammered out, it would still leave thousands of warheads, each approximately eight times more powerful than the bombs that obliterated Hiroshima and Nagasaki in 1945. Just a few of these weapons could decimate a nation and wreak unimaginable havoc on the global environment, economy, food supplies and the oceans.

The Obama-Medvedev joint understanding does boost the international non-proliferation regime, which has been weakened in recent years.

The Nuclear Non-Proliferation Treaty (NPT) came into force on March 5, 1970, and committed the five official nuclear weapons states “to pursue negotiations in good faith on effective measures relating to cessation of the nuclear arms race at an early date and to nuclear disarmament.”

Every country in the world has since accepted the NPT, with the exception of Israel, India, Pakistan and North Korea. But, nearly 40 years later, in the absence of progress toward complete disarmament, non-nuclear weapon states have been loath to adopt more stringent measures ensuring they do not develop the bomb.

The George W. Bush administration undercut the NPT during its eight years in office, rejecting numerous arms-control treaties and pursuing the acquisition of a new generation of weapons (as did other nuclear weapons states).

The Obama-Medvedev agreement re-establishes a commitment to the NPT obligations, but it still lacks a timeline. While Obama affirmed the goal of a nuclear weapons- free world, he added it will “not be reached quickly — perhaps not in my lifetime.”

Perhaps most important, the new agreement revitalizes cooperation between the powers needed to address security challenges. As one former U.S. official said, the new agreement is “not about [arms] control, it’s about cooperation.” More than cutting the number of warheads, the United States and Russia must also agree to take them off “hair-trigger alert” to reduce the risk of an accidental launch.

But this still leaves unresolved NATO’s status and the plans to deploy anti-ballistic missile (ABM) systems in Eastern Europe. Although the 1991 breakup of the Soviet Union ended the Cold War and, with it, the rationale for NATO, the alliance has continued to expand eastward, providing Russia with an excuse to retain a substantial nuclear weapons stockpile.

Russia also sees the planned Eastern European ABM system, which the United States claims is intended to target Iran’s missiles, as aimed instead towards its own nuclear arsenal. A limited ABM system has no hope of defeating Russia’s array of nuclear weapons, but it provides Russia with a further rationale, one of deterrence, for hanging on to a variety of weapons and delivery systems.

Some observers suggest that the United States is using the ABM system as a bargaining chip to pressure Russia to agree to end its transfer of nuclear energy technology to Iran.While negotiations proceed on a new treaty, the Obama administration is undertaking a review and overhaul of the U.S. Nuclear Posture Review (NPR), the policy document governing U.S. nuclear weapons. The Bush administration’s NPR had lowered the threshold for use of nuclear weapons and expanded the mandate for such use. Members of the U.S. Nuclear Posture Commission have recommended that, beyond rescinding Bush’s expansion of the role of nuclear weapons, Obama’s NPR should unambiguously assert that the sole purpose of U.S. nuclear weapons is to deter their use by others.