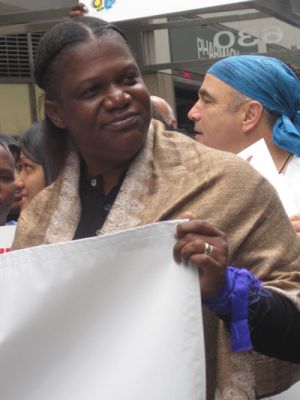 Childbirth is a painful and difficult experience for most women, but for Toya Murray, it was torture. Like many other incarcerated women across New York State, she was shackled immediately before and after giving birth.

“When it was due for me to have my baby, they shackled my hands and feet when I went into labor to go to the hospital,” Murray said at the July 9 rally outside Governor David Paterson’s office at 630 Third Avenue.

Murray was pregnant when she began serving a 15-month sentence for a nonviolent crime at Bedford Hills Correctional Facility in Westchester County in 1996. She was often shackled when she was transported between facilities during her incarceration, but said she never experienced anything like the discomfort of being restrained during labor. She said labor was excessively difficult since she was unable to move her arms or legs. She worried that her child’s safety would be jeopardized since she had little control over her body.

“Anything could have happened when the baby came out,” Murray said. “I felt very uncomfortable.”

Once the baby was born safely, Murray’s ability to hold her child was limited by the metal shackles. What should have been a tender moment between mother and child was uncomfortable and restricted.

Murray and other demonstrators wore purple ribbons around their wrists instead of shackles during the July 9 press conference and rally at Paterson’s office. The rally, organized by the Correctional Association of New York, New York Civil Liberties Union and Women on the Rise Telling HerStory (WORTH), was held in support of state anti-shackling legislation (S.1290-A/A. 3373-A). The bill would ban the use of restraints on incarcerated women during labor and post-delivery recovery and limit the use of restraints during transportation to and from hospitals in New York. The demonstrators are hopeful that Paterson will sign the bill, which was passed unanimously by the New York State Senate and overwhelmingly by the state Assembly in May. 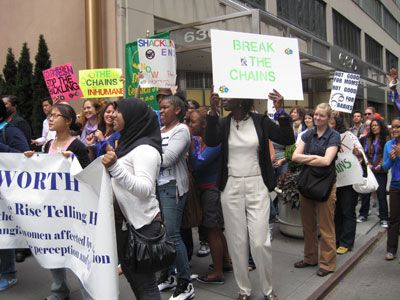 The use of restraints is currently the decision of individual correctional officers. The bill would create uniform standards across the state and would only permit one wrist restraint during transportation if the pregnant woman has an exceptionally high risk of injuring herself or personnel.

In an effort to study the current statewide use of shackles on pregnant women, the New York Civil Liberties Union recently issued a report entitled, “Access to Reproductive Healthcare in New York State Jails.”

“We found that of the 66 local correctional facilities [in New York State], only three had written policies about the use of shackles and only two actually prohibited it altogether,” said Ami Sanghvi, a staff attorney at the New York Civil Liberties Union. She considers shackling women while in labor a violation of the Eighth Amendment to the U.S. Constitution, which prohibits cruel and unusual punishment.

According to a memo issued by the rally organizers, using restraints on women during labor or after birth can pose health risks to both women and babies. The memo asserts that such restraints are unnecessary.

“Shackling cannot be justified as a measure necessary to prevent escape: women cannot run with any significant level of speed during labor or recovery after delivery,” the memo states.

Prisons in New York City have restricted the use of restraints on incarcerated women during labor since 1990, the memo states. Since then, there have been no incidents of escape or harm to medical or correctional staff. Illinois, California, Vermont and New Mexico currently have laws prohibiting the shackling of women in labor. The lack of escape efforts by pregnant women in these states has been used to call for a similar banning of shackling in New York.

Serena Alfieri, Associate Director of Policy for the Women in Prison Project, helped organize the rally. She expressed a need for the public and governor to understand how incarcerated women feel when they are forced to wear shackles during labor. In addition to the physical discomfort, shackling takes time and often delays transportation to the hospital.

“Putting shackles around your ankles, arms and around your waist and connecting them to your arms is a process,” Alfieri said. “Normally you’re not the only inmate going on a hospital visit, and if you are in labor, that process could be torture for you.”

The rally featured several speakers from organizations in support of the bill, including Human Rights Watch. Four formerly incarcerated women, some who had experienced shackling during labor, shared their stories with the crowd and joined in chants, such as “Break the chains,” and “We want justice.”

Democratic Assemblyman N. Nick Perry and a representative from Democratic New York State Senator Velmanette Montgomery’s office, who are both sponsors of the bill, also addressed the demonstrators.