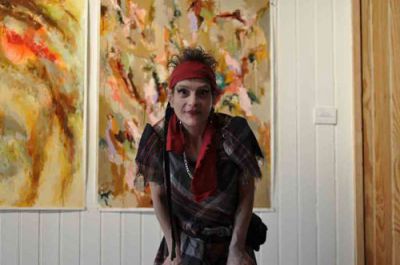 Valerie Caris Blitz, a longtime New York City-based painter, actress and activist, died July 28 after a long illness. She was 52.Influenced by “all the disciplines of the 20th-century avant-garde,” she was heavily involved with the Lower East Side art space ABC No Rio in its early days, exhibiting her paintings and performing there. She also spent time in Berlin, where eccentric art dealer Emanuela Schwankl organized her first solo show. She appeared in more than 40 films, including Ari Roussimoff’s Shadows of the City and Michael Brynntrup’s Die Bortschaft (The Message).After she was diagnosed with HIV in 1989, her work became more conceptual. Her pieces “Queen Sex Positive” and “Vestment” were part of the Sur Rodney Sur show “Blood Fairies.” In the last 10 years, she returned to her first love, abstract-expressionist painting. She also volunteered at the Mayday Books infoshop.“There are a number of women with AIDS who become artists because AIDS pushes them into expression,” said performance artist Penny Arcade. “Valerie was an artist before she got AIDS, and having AIDS then became her subject matter.”She is survived by her husband, percussionist Eric Blitz, and their four cats.