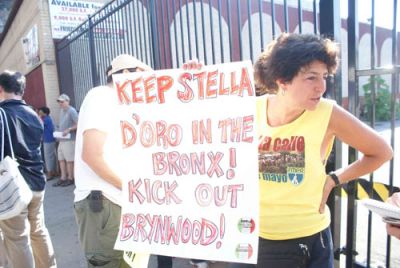 The 136 workers who ended their strike against Bronx-based Stella D’oro Biscuit Co. in July could offer a test case of whether the public sector is willing to intervene on behalf of workers.

With the United States facing its greatest rates of unemployment and under-employment in decades — currently 9.4 and 16.3 percent respectfully — the efforts of Stella D’oro workers and neighborhood members will not be enough to save these jobs. What is needed is a coalition that includes neighborhood and labor groups, as well as legal and political activists, that will push the New York City Council and New York State Legislature, to apply eminent domain laws to keep the Stella D’oro factory where it is by having it become a worker-run cooperative.

The Stella D’oro workers, who are represented by Local 50 of the Bakery, Confectionary, Tobacco Workers and Grain Millers Union, have shown themselves to be a coherent and solid group of workers, striking for 11 months to keep their jobs — without a single participant crossing the picket line. On June 30, the National Labor Relations Board ruled that Brynwood Partners, the owners of Stella D’oro, had engaged in unlawful labor practices.

Hard on the heels of this victory, Brynwood Partners announced plans to close the factory by October. The time is ripe, especially in the era of the Obama presidency, to use eminent domain to expropriate with compensation enterprises like Stella D’oro, which are in danger of being sold or moved out of state by their super-profit-seeking owners and managers.

In the United States, eminent domain has been used for many decades to make way for the construction of various public projects, ranging from highways and hospitals to municipal offices, schools and public parks.

In 2005, the Supreme Court expanded the government’s power of eminent domain when it ruled in Kelo v. New London that the city of New London, Conn., could seize private property for reasons of “public purpose.” According to the Court, this was a permissible public use under the takings clause of the Constitution, as the intent was to create jobs and increase tax revenues.

In the preponderance of state constitutions, eminent domain is permitted for “stated public purposes” or a “recognized public purpose.” Compensation is paid at the market value of the factory at the time of expropriation.

In the case of Stella D’oro, the factory would be turned over, with an initial public subsidy, to the employees. Without owners and managers, the workers have the technical skills to run these factories as cooperatives while saving the huge salaries skimmed off the top by former managers.

If eminent domain was applied to keep the Stella D’oro factory in the Bronx, the purchase of the factory would be funded through a combination of state or city compensation (which would be paid over a period of years) along with a temporary public subsidy or low-interest loan guarantee, which would guarantee the factory’s productivity in the initial months of the transition. This financial assistance would, in most cases, be less than the tax concessions, subsidies and other benefits routinely showered on private businesses that maintain or bring jobs into a community. And in the Stella D’oro case, no new land seizure is required and no displacement of homes or other businesses would occur.

Eminent domain is a mechanism of legislative public policy, no different from the power to tax or regulate workplaces to ensure the health and safety of employees and surrounding communities. It must be used creatively. The current crisis of American labor requires new forms of alternative union associations that go beyond collective bargaining.

Why shouldn’t federal recovery and stimulus measures be directed at workers who make products or provide services rather than subsidizing failing investment banks and insurance companies?

Brynwood Partners cannot be free of societal obligations. By outsourcing their functions, they have broken a social contract for which there must be reparations and consequences. Labor has few options, and the use of eminent domain would begin a debate about the obligations and potential of communities, city councils and state legislatures to dent the silence and retreat of American labor before the loss of jobs with livable wages.

Peter Ranis is the author of Class, Democracy and Labor in Contemporary Argentina. He has written extensively about the factory