ANATA, East Jerusalem, August 3—The day I arrived here a right-wing extremist walked into Open House, a lesbian and gay center in Tel Aviv, and pulled out a gun, killing three and injuring 15.

The next morning, at 5 a.m., Palestinian occupants of two houses in Jerusalem were evicted and Jewish settlers installed in their place.

I am here as part of a 60-member delegation to the Israeli Committee Against House Demolitions seventh annual summer camp. We will rebuild two houses here in Anata, a village of 30,000 on the outskirts of East Jerusalem, and construct 11 public toilets in the south of Hebron. If there is time remaining, we will work on a project in the Jordan Valley. 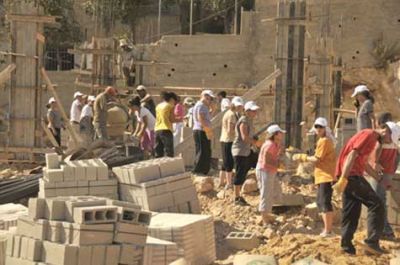 We are staying at Arabeia House, which has been demolished and reconstructed four times. It features a spacious downstairs room where the women sleep on mattresses lined up on the floor. The men sleep in two covered areas on the large terrace cut into the hillside. The house has been under a demolition order since June.

On the hill across the way, on the other side of the infamous “Separation Barrier,” as Israeli officials call it (it is known to the rest of the world as the Apartheid Wall), is a military base and prison. Looking east, you can see the Dead Sea and the mountains of Jordan.

On our first full day here, we were taken on a tour of Anata. It was a striking contrast with the well-kept Jewish neighborhood in the south of Jerusalem where we met for our orientation. The first stop is the top of the hill, where a Bedouin encampment is also under a demolition order. The soldiers across the way find the corrugated metal buildings unsightly and want to move the Bedouins, who drive their sheep by our compound in the mornings, into the village. “Whoever heard of animals living in the middle of the village?” asks Salim Shawamreh, who lives in Arabeia House with his wife, for whom the center is named.

Anata is split in three parts; one section is considered part of Jerusalem, all of which has been annexed by Israel; the rest is split between Areas B and C, administrative designations that were applied to the Occupied Territories by the 1995 Oslo Agreement that was supposed to lead to an independent Palestinian state. Areas with the B designation are under Palestinian civil administration and Israeli military control, while C areas are under full Israeli control. All the houses in the Area C section of Anata are under demolition orders, having been built without going through the expensive and tortuous Israeli permit process, which almost always results in denial for Palestinian applicants. 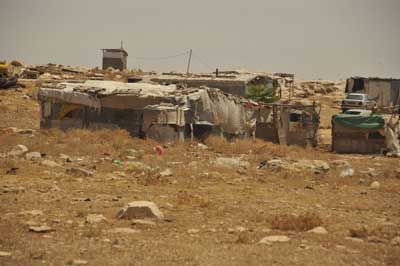 After our introduction to the village, we began our real work here — building houses for two families whose homes were demolished by Israeli bulldozers. I was working on a house for the Sbaih family, located on a hill overlooking a section of the wall under construction. Looking down, we saw U.S.-made Caterpillar backhoes and bulldozers moving materials around. Up at our site, we were working on pure people power. The internationals, most of them from Spain, cheerfully passed cinder blocks and other materials along human chains. As I passed buckets back and forth, I learned three new words in Arabic: “raba,” sand; “hasma,” gravel; and “mai,” water. These three materials were combined with cement in a small mixer; the resulting concrete was poured into wooden forms to make the columns that will support the walls.

At 5:30 p.m., some of us knocked off for the day to attend a demonstration in Jerusalem outside Sheikh Jarrah, where the Hannoun and Ghawi families had been evicted that morning. Their houses were part of a group of 28 that had been bought by Jews in the late 19th century. The previous occupants had abandoned them in 1929 after violence erupted against the growing influx of Zionist immigrants into what was then the British Mandate of Palestine. Israeli courts have ruled that the property should be returned to Jewish ownership. “If they really wanted to be just, they should also return the homes in the rest of Jerusalem that were owned by Palestinians in 1948, and there are a lot more of them,” says Meir Margalit, a staff member at the Israeli Committee Against House Demolitions.

In November 2008, another family was evicted. Um Kamel, whose husband died of a heart attack two weeks after the event, erected a tent outside her home, which was occupied by settlers. This summer, activists from the International Solidarity Movement (ISM) were staying in the threatened houses 24 hours a day, but they failed to prevent the evictions. Two hundred police and soldiers participated in the raid, in which eleven internationals and two Israelis were arrested. Charlie Wood, an ISM activist who was arrested and released, described how he watched from the back of the police wagon as settlers streamed into the empty houses, shaking hands and joking with police.

Yesterday’s demonstration began as a somber gathering of 100 or so outside the barriers police had erected in front of the entrance to Sheik Jarrah. Things heated up when chanting began and some people knocked over two of the metal racks, although no one entered the cordoned-off area. The knot of five or six police who had been huddled near the entrance was reinforced by another dozen, all carrying machine guns. They got into a formation and rushed toward the end with the downed barriers, pushing the demonstrators back a few yards, and a small group of police remained outside the barriers on the sidewalk.

A dance ensued for the next hour, in which police periodically pushed the protesters to the traffic island and then across the street and then retreated. At least three people were arrested.

Eventually we were joined by two more ICAHD staffers who had been to the vigil in Tel Aviv outside the lesbian and gay center. Our first full day, and our stay here is already marked with actions commemorating lives lost and broken. Welcome to Israel indeed.

Ellen Davidson is an editor with The Indypendent. She will be blogging about her experience in East Jerusalem for two weeks in August 2009.