ANATA, East Jerusalem, August 16—The seventh annual Israeli Committee Against House Demolitions (ICAHD) rebuilding camp has come to an end. It’s difficult to imagine going back to our relatively cushy lives — taking showers that gush hot water instead of the unsteady trickle we have become used to, sleeping in rooms with fewer than 35 others, wearing clothes not spattered with cement.

It’s also hard to contemplate not spending the day with this group of some 60 committed, energetic and passionate people who have come together from Britain, Spain, Portugal, Finland, Turkey, Greece, and the United States to accomplish so much in two weeks.

But the real work, as ICAHD Director Jeff Halper pointed out to us last night, is really ahead of us: going back to our various countries and communities and organizing to change policies of support for Israel’s occupation of the West Bank and Gaza and discrimination against Palestinians within Israel itself. 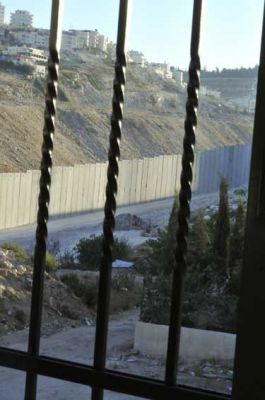 On Friday, Aug. 14, many of us went to the weekly demonstration at Bilin against the wall that Israel is building in the West Bank, splitting Palestinian communities and leaving 9 percent of the land of the West Bank on the Israeli side of the barrier. This week’s action was about twice as big as usual, with a large proportion of internationals. Some 400 people marched out to the wall. To our right, a couple of Palestinian boys threw rocks from an olive grove while soldiers shot tear gas at them, some of which drifted across to the road we were on. The acrid smell was irritating, but we came prepared with pieces of onion, which we wrapped in bandanas and held to our noses.

When we got to the wall, some activists forced open a gate in a fence that keeps the villagers away from the wall that goes through their land. Soldiers on the other side of the wall shot the occasional canister of tear gas, especially when some Palestinians began throwing rocks from our location. They use homemade slingshots constructed from shoelaces and the tongue of the shoe.

After a while, the Israelis pulled out the big guns, as it were: tanks that spray “stink gas,” a foul-smelling concoction that will stick with you for days. The crowd retreated and advanced as the cannons appeared and disappeared over the hill across the way.

Eventually, the soldiers sent a fusillade of tear gas our way, filling the area with white smoke and driving us out. As we walked back to the center of the village, a Palestinian man who had been waving a large flag ran yelling up the hill straight into the clouds of gas, an act of both defiance and desperation — the embodiment of what it means to have nothing left to lose. 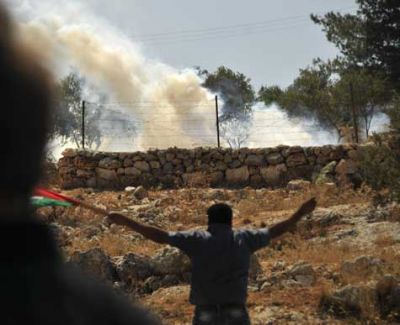 Perhaps one of the most important parts of our experience here was Friday night’s discussion of BDS — boycott, divestment and sanctions. Our construction projects here in Anata were really only the tip of the iceberg. The real work begins when we go home and use our personal experiences here to reach and persuade others and build support for a growing movement to isolate Israel politically, culturally and economically in order to pressure it to end its policies of occupation and discrimination.

A panel of activists — Hazem Jamjoun, a Palestinian based in Canada; Yvonne Deutsch, an Israeli feminist; Ryvka Bar Zohar, who works with the Adalah coalition in New York City; and Jeff Halper — talked about different approaches to this work. They stressed the importance of careful research, of choosing targets appropriate to local circumstances and of keeping the work sustainable to avoid burnout. Jamjoun explained that the economic impact of BDS is a secondary goal, while the main purpose is to educate and inform. Camp participants gave examples of work in their own countries.

In Barcelona, activists targeted Abacus, a Spanish co–op for books and school supplies, using the campaign to reach a million consumers; in Portugal, an art teacher persuaded her colleagues not to participate in Israeli illustration contests; an Adalah-NY campaign in New York links diamond dealer Lev Leviev’s support for West Bank settlements with his partnerships with a New York developer who is part of the gentrification process in Brooklyn.

On the morning of Saturday, Aug. 15, we put the finishing touches on the houses, spreading watery paint on the walls and clearing out some of the construction debris. Then the celebrations began. We gathered with the Palestinian workers, the families, members of the community, and some of the people who had shared their experiences with us during the camp. With much music and dancing, we moved furniture into one of the houses and turned over the keys to the two families. Participants and community members alike spoke of how transformative the experience had been and of the importance of continuing to bring the Palestinian experience to people around the world. 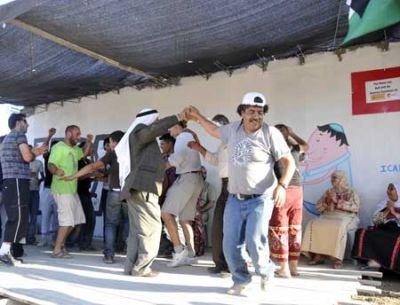 Then we all returned to Beit Arabiya, where the families and workers joined us for a feast of roast lamb, chicken, rice and yoghurt. The campers met for one last time, sharing appreciations of each other, the ICAHD staff and different aspects of our shared experience; we presented gifts to our incomparable hosts Salim and Arabiya Shawamreh, their daughters, the ICAHD staff, and others who had worked behind the scenes to make this, the biggest camp ever, function smoothly.

We leave here having accomplished a lot — two families have homes to replace the ones demolished by the Israeli military; we have learned firsthand something about life under occupation; and we have formed connections and friendships with other activists for the Palestinian cause. But as I look out from the Sbaih family house I helped build, I see that the view from the windows facing westward is dominated by the towering concrete wall that snakes through Palestinian territory, dividing communities and claiming yet more land for Israel, and I think about how much remains to be done.

Ellen Davidson has been blogging from East Jerusalem throughout early August. To read her other reports, visit indypendent.org.