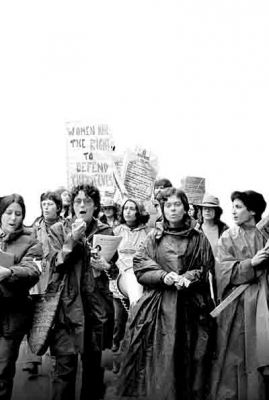 Arm the Spirit: A Woman’s Journey Underground and Back

Diana Block, a former member of the Prairie Fire Organizing Committee, returned to public life in 1994 after nine years living on the lam. Her often-poetic memoir, Arm the Spirit, vividly captures the agonies and periodic ecstasies of hiding in plain sight, from cutting off ties with family members and friends to raising her two children.

In June 1985, Block, her two-week- old son, Tony, and five other members of Prairie Fire, an offshoot of the Weather Underground, found a surveillance device in their car. At the time they were living in Los Angeles.

Faced with the possibility of arrest due to their involvement in aiding members of the Puerto Rican independence movement, they decided they needed to move underground.

A month earlier, Block’s partner Claude Marks and an activist named Donna had purchased explosives for several independistas. Unfortunately for them, the suppliers turned out to be FBI informants.

While Block never discusses the efficacy of this caper, she focuses much of the book on the frenetic aftermath of having to leave everything and everybody behind. When her father died, for example, she didn’t learn about his passing until a year after the fact. Similarly, when friends married, divorced, had children or became ill, she was removed, unable to be a friend or confidante.

Though Block was forced to sever connections with family and friends, she, Marks and Tony made new lives for themselves, using false IDs. At one point, she took a creative writing class; at another she joined a group of activists in demanding better healthcare for people living with HIV and AIDS.

Still, Block never let her guard down, and she eloquently depicts the pressure of continually looking over her shoulder. When Marks and Donna were featured on America’s Most Wanted, her fears of detection escalated. Her panic diminished when she realized that the police photos looked nothing like the pair’s disguised personas.

Block’s writing is especially poignant as she charts the push-and-pull of sub rosa parenting, and her chronicle of trying to get pregnant a second time is heart-rending. Although she gave birth to a daughter in 1991, her account of an earlier miscarriage brings the reality of underground life into sharp focus.

Likewise, once Tony entered school, the situation became increasingly fraught. “What kind of family keeps news of its ancestors under a veil of security?” Block wondered when her son was assigned to draw a family tree for class and Block, worried about blowing their cover, told her son that his grandparents were dead. The strain and constant pressure of concealing their real identities, and raising two children in such an environment, began to take a toll on Block, who along with Marks, started to reassess their long-term plan. Together with their comrades-in-hiding, they began to explore ways to re-emerge.

Once they discovered that the government was only interested in prosecuting Marks and Donna, hard-fought negotiations resulted in Marks serving slightly less than four years, and Donna two years, in prison. While imprisonment was predictably rough, returning above ground was also challenging. Nine years is a long time, and Block discovered that her friends “had all evolved and aged in one way or another. Some owned houses, many had professional jobs, most had settled into families.”

Unsettling as it was to renew old acquaintances, Block acknowledges that she received enormous support in re-establishing herself. She now edits The Fire Inside, the newsletter of the California Coalition for Women Prisoners, and is a freelance writer. Marks runs The Freedom Archives, a San Francisco radical media center. The two have been together for 25 years.

Arm the Spirit blurs the line between political tract, personal odyssey and love story. Although it never critiques either Prairie Fire or the use of violence, its gripping portrayal of one feminist activist is both inspiring and sobering.