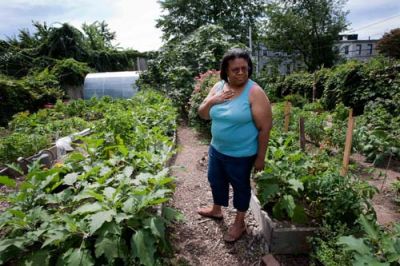 Fresh food can be hard to find in Bedford-Stuyvesant. Yet around the corner from eateries like Youngtze River Chinese Takeout and the Malcolm X Boulevard Pizzeria, the Brooklyn Rescue Mission’s farm grows 7,000 pounds of produce a year, most of which is provided to the local community for free.

In Bed-Stuy, known to many as a “food desert,” nearly eight in 10 food stores are bodegas, which makes it difficult for residents to find fresh, healthy food.

The 5,000-square-foot oasis at 255 Bainbridge Street yields an array of produce — the farm’s beds swell with zucchini, eggplant, peppers, kale, tomatoes, chard and sunflowers. A fig tree towers over the farm’s back end, and a dragonfly flits over the herbs.

However, this could be the farm’s last season. The New York City Department of Housing Preservation and Development (HPD) is asking the Bed-Stuy Farm, half of which is rooted in an undeveloped lot owned by HPD, to move. The Brooklyn Rescue Mission said it received a phone call from HPD a few months ago asking the farm to move to a new site through the city’s GreenThumb program. The other half of the farm is located in the Brooklyn Rescue Mission’s backyard.

“The farm is a location and a destination,” said the Reverend DeVanie Jackson, who founded the farm with her husband, the Reverend Robert Jackson, in 2005. “Where else can people get food picked the same day for free?”

According to the Brooklyn Rescue Mission, they moved onto the HPD property after it sat empty and delinquent for years. Filled with broken concrete, the HPD lot elicited complaints from neighbors who feared it would become a breeding ground for rats.

In 2003, the Jacksons teamed up with New York Cares and other organizations to clean out the lot. They initially filled it with wood chips, but over time, food shortages at the Rescue Mission convinced them to farm on it.

“We see ourselves as almost people who should be paid for taking care of the land,” DeVanie said. “[The developers] left a tangled mess, they left an eyesore, and now it’s a viable, useful place for the community.”

“On the one hand [the Rescue Mission’s work] is about getting fresh food to folks’ tables who need it,” said volunteer Thor Ritz. “But it’s also about getting people together to relearn or rethink what it is that they eat — to basically empower folks to obtain healthy food and make it part of their lives.”

There are multiple advantages to growing food in the city, including producing better quality food and reducing consumers’ carbon footprint by limiting the amount of energy involved in transporting food, said Devon Spencer, educational director of the Science Barge, a Yonkersbased educational project that promotes city farming.

Spencer said most of the students she meets at the Science Barge “have never gotten the chance to hold a worm or pick a ripe tomato.”

The land now in dispute was sold years ago to a nonprofit holding company, Neighborhood Partnership HDFC, that wanted to renovate a house on the property, DeVanie said. But the house, which was beyond repair, was demolished, leaving the land unkempt and undeveloped for years.

Now Neighborhood Partnership HDFC wants to sell the lot to recoup their costs, the Daily News reported July 29. HPD did not respond to multiple requests for comment.

“The intent was always to do affordable housing on this site,” HPD official Margaret Sheffer told the Daily News. “The garden had essentially come in as a squatter.”

The farm’s supporters are currently circulating an online petition asking HPD to protect the Brooklyn Rescue Mission. At press time, it had more than 1,300 signatures.

“This is more than a garden,” DeVanie said. “It’s a connection to community in a way which is not so easily moved.”

The Jacksons also plan to meet with City Council members to make their case. Robert is hopeful that if they “keep the pressure on,” HPD will back down.DeVanie said she spends many of her summer afternoons tending the garden.

One recent afternoon, she gestured toward a dragonfly that landed on a nearby plant. It didn’t fly away.