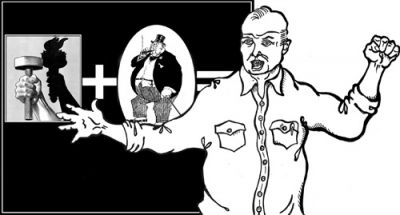 In 2006, John “Tito” Gerassi’s tradition of encouraging his students to question the status quo finally caught up with him.Well, not “finally.” After all, he had already been blacklisted from academia for “inciting civil insurrection” among the students at San Francisco State when they occupied the school in 1966. Unable to work in the United States, Gerassi taught at the University of Paris while earning his Ph.D at the London School of Economics, writing his dissertation on Latin American politics. In 1974, when the teacher’s union finally won his case, his rights as an American educator were reinstated and Gerassi returned to the States.Regarding this most recent attack — initiated by an angry student after the professor declared he was “pro-Palestinian” on the first day of class — Gerassi writes, “Ever since I denounced JFK’s invasion … of Vietnam, I have been smeared by bigots, America-firsters, racists and just plain idiots.”

Now a tenured professor, Gerassi has taught political science at Queens College, a City University of New York (CUNY) campus, since 1978, when he resigned from his part-time honorarium at Bard College to focus on the “real work” at Queens. Gerassi says he choose CUNY because he wanted to teach the reactionary, working-class students who “never read, they all worked … all they wanted was to get their degree to get a better job” rather than Bard’s already-converted “flaming lefties that were going to bring Marxism to America.”

As editor of Unrepentant Radical Educator, Tony Monchinski introduces us to the professor who sparked his own emerging analytic inquiry and appreciation for struggle when he was a freshman at CUNY 20 years ago. Via selected writings and interviews, he leads readers through Gerassi’s uncommonly inspiring life.Born in France as Jean-Paul Sartre’s “non-godson,” he was also the son of Fernando Gerassi, a painter who had volunteered to fight against Franco’s forces in Spain before the family fled France during World War II, using forged diplomatic passports. Gerassi discovered his writing skills and political identity as an undergraduate at Columbia University striking in solidarity with the maintenance staff before working as an editor for Time, Newsweek and The New York Times.

Unrepentant Radical Educator melds personal narratives from Gerassi’s days of journalism and activism, featuring Che Guevara, Fidel Castro, Jerry Rubin, Eldridge Cleaver and others of the era, with more scholarly essays on figures such as Sartre, Camus, and Julius and Ethel Rosenberg, of whom Gerassi says, “if they were guilty, they were this planet’s greatest heroes.” Especially fascinating are the tales of deliberate misreporting by the major media outlets for which he worked, epitomized by the words of owner Henry Luce when Gerassi was hired: “We here at Time believe that objectivity is neither feasible nor desirable.”

“I trust no one more than Gerassi to make me understand America,” Sartre said. In multiple essays, Gerassi leads us to confront the liberal corporatism upon which the U.S. empire is built, which makes all human rights and needs subservient to capitalist aims. It is a hard lesson to imagine in a Queens College classroom. True democracy, Gerassi repeatedly reminds us, means “everyone must have access to the same medical treatment and the same educational advantages. Without good health there is no ‘life.’ Without equal education, there is no choice, hence no Liberty. So how can we pursue happiness?”

Although occasionally repetitive and plagued with the minor typos and formatting errors too often characteristic of the lower-budget writings of the left, Unrepentant Radical Educator is an engaging, enjoyable and provocative read offering a well-rounded look at Gerassi. Pieces in the book range from “An Open Letter to Europeans” that urges Europeans to resist American global domination and “The Ideal Syllabus,” which details the curriculum of an international relations course, to “The Cell,” an original one-act play, performed in 1967, about Cuban prisoners awaiting execution. The familiar details interjected by Monchinski — such as when the “older, short balding guy in jeans and a plaid button-down shirt swaggered into class, probably a maintenance man”— add a revealing personal dimension uncommon in such academically affiliated texts.

At 78 years old, Gerassi’s earnest commitment to a better world is especially compelling shared through the lens of enthusiasm with which he continues to view his life and career.