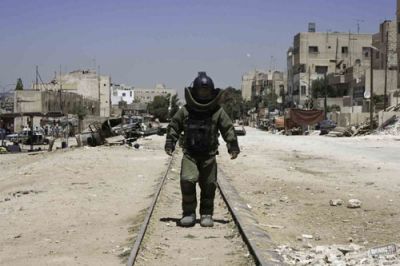 The Hurt Locker essentially reverses the popular notion that advances in electronic media representation exert a dehumanizing impact on the dynamics of postmodern warfare. From ‘embedded’ reporter coverage to Kuma-produced video games, the dictates of reality TV and nintendo-ization have situated the battlefield in hyperspace, where the Iraq War hits the Facebook generation – civilian and soldier alike – with a powerful, immediate blend of rhetorical and sensorial s(t)imulation. The revolution in military affairs has produced war as a media event – an encompassing, virtually integrated, impersonally shared network-centric experience.

It is perhaps regrettable that many critics are praising Kathryn Bigelow’s latest film precisely in terms of its experiential quality, of how it immerses us in what combat is really like. The Hurt Locker undeniably packs a mean visceral punch, but there is far too much intelligence and subtlety to Mark Boal’s script and Bigelow’s direction for them not to go against the current war movie standard of replicable shock-and-awe realism, upheld in such films as Rendition, The Kingdom and In the Valley of Elah. Instead, they take life on the front extremely personally, so much so that it registers as an absolutely individual condition, which is never representative and can therefore not be generalized or authentically mediated.

War yields no subjective image, and its hidden face appears in inscrutably plain view on the countenance of the three good men who make up Bravo Company’s Explosive Ordnance Disposal team: ace and wild card Staff Sergeant William James (Jeremy Renner), whose fearless demeanor is only trumped by his technical brilliance, and the more cautious, circumspect Sergeants J. T. Sanborn (Anthony Mackie) and Owen Eldridge (Brian Geraghty), both brave but not foolish enough to put self-sacrifice on the job before the prospect of going back home in one piece. Their story unfolds like a procedural, ruled by restraint and low on testosterone-fueled drama. (Even a rare, pugnacious male bonding scene, where the leads take turns punching each other in the stomach, reveals a choreographed release mechanism devoid of macho posturing or Fight Club-style reality check.)

James assumes leadership after his predecessor (Guy Pearce) is killed by a cell phone-detonated IED (improvised explosive device) in the opening sequence. The trio has one month of duty left, and the sporadic display of an ever-narrowing timeframe reminds us how different temporal perceptions determine their respective attitudes. While Eldridge serves out his days just to survive, the more seasoned Sanborn, as he emerges through the cracks of Mackie’s robust delivery, struggles with the uncertain future of civilian life. (If there’s no place like home, then how to escape the void?) Not so James, whose sense of time is circular. Bigelow shows him stranded in a reclaimed domestic realm, telling his little son that as we grow up, we lose our love for most things we were fond of as children. Defusing makeshift bombs in hostile territory has become James’s only passion, a labor of love that compels him to return to Iraq and anchors him there.

Through every new challenge, the squad forges ahead with the cyclical progress of an organism, at the heart of which James works his magic. He epitomizes the director’s view of armed conflict as an enhanced bodily function, just the way she imagined vampirism in Near Dark (1987), her best earlier work. James has the mastery of loose ends and wires down to an intuitive expertise – direct, meticulous and meaningful in its detachment from the war’s wide-ranging absurdities. (The higher officer who pays him inflated compliments on his track record of 873 disarmed IED’s appears straight out of Catch-22 or Dr. Strangelove.) Like Bigelow’s night breed, he has made a nonsensical state of being his own by functioning fully within the belly of the beast, and Renner’s splendid performance infuses his laconic, steely poise with undertones of tender resignation.

More akin to the changeling in Near Dark, Sanborn puts the war in a starker, less internal perspective. Despite his irreproachable conduct and flawless, level-headed professionalism, the obscenity of routine soldiery has undermined the life prospects he holds dear. His vulnerability surfaces during the tightly framed shot-reverse shot sequence—equivalent to a failed dialectical pattern—of a relentless car-ride exchange with James. Its mortifying simplicity almost borders on abstraction, and conveys that Sanborn has no solace to glean from his self-contained brother in arms, whose feel for sensitive hardwired gadgetry extends to the way he handles people.

James recalls the insulated, philosophical disposition of the character played by Sean Penn in The Thin Red Line (Terrence Malick, 1998), which is telling given the intimations of Malick’s vision – as well as Alexander Sokurov’s – in the style of The Hurt Locker. The filmmakers’ microcosmic focus on military deployment through the vagaries of a specialized unit spurns any strategic rationalization – command chains, rules of engagement, fragmentary orders… – that depersonalizes the prowess of the individual soldier. Bigelow has wisely refrained from the impossible project of an anti-war movie and instead made a radical, political, eminently cinematic film that goes out on a limb to resist the stake of media capitalism in the business of war.

Against the amplification of mayhem, more often than not tantamount to its sanitized digital rendering, she tones and pares the action down to an analytical mode, dilating space and time to situate the war in a no man’s land suspended between stillness and combustion. Detailing motion and depth, the camera refracts the troops’ maneuvers through an existential prism, as a measure of their surrender to the imperturbable serenity of the environment. This is nowhere more apparent than in the grueling desert shoot-out the squad undertakes against faceless gunmen holed up in a bunker. Duration and distance seem the index of a treacherous ecosystem—ranging from a fly’s continuous, tantalizing perch near the corner of Sanborn’s eye to a herd of goats on the railroad tracks providing the enemy cover—that pushes their patience, timing and coordination to the limit.

Multiple miscommunications and confused encounters signal the American protagonists’—as well as the film’s—inevitable anxiety toward the Otherness of the Iraqis. Distinctions between friend and foe, or between patronizing liberal sympathies and rampant racial hatred, hold no candle to the impossible humanity of armed conflict. A moment of truth shows the three main players literally fading from view as they embark on a nocturnal recon venture. For long seconds, the empty black screen evokes the war’s heart of darkness as vanishing point, and captures how the negative space of any combat narrative eclipses the sorry sum of its parts – an inherent inadequacy The Hurt Locker dramatizes quite impressively.